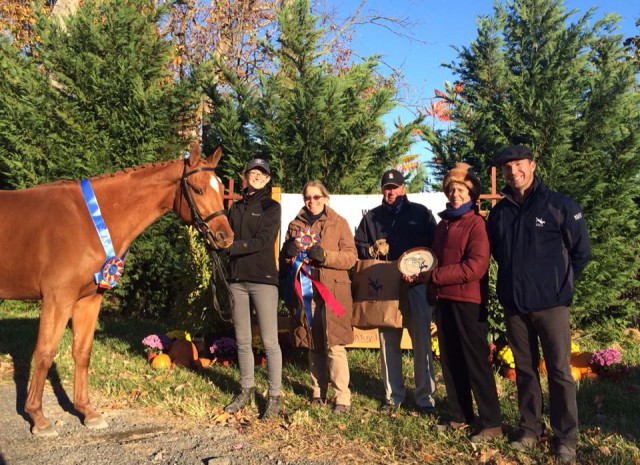 A 2-year-old Hanoverian filly owned and bred by Tracy Wagner and presented by Vanessa Huskic, Ever So Clever GRF is by Milwaukee’s Finest and out of Escudo II. She was also named the 2-year-old champion earlier in the day, earning a score of 79.175 from judges Robin Walker and Debbie Adams.

The Hanoverian filly Maybe Magic C also took home the title of Yearling Champion with a score of 79.45 before being named Overall Reserve Grand Champion. Owned and bred by Laurie Cameron and handled by Klaus Schengber, the filly is by Mighty Magic out of Winter Morning.

Landmark’s Artemis, a Thoroughbred/Dutch Warmblood filly by ROC USA and out of Sunset Paradise, won the 3-year-old Champion title. Owned and bred by Jacqueline Mars and ridden by James Houston, she scored 78.2 to win her class and ultimately the championship in her age group.

Maybe Magic C also took home a third prize at the end of the day, as her score of 79.45 earned her the USEA’s Born in America award, which is presented to the highest scoring horse at the FEH Championships that is bred in North America.

The FEH West Coast Championships were held Wednesday at Galway Downs in Temecula, Calif., with Let’s Go DF taking the title of Overall Grand Champion. A Holsteiner/Thoroughbred gelding by Linaro out of Rani D owned and bred by Dragonfire Farm, Let’s Go DF was also named 3-year-old Champion in his class.

Terry and Linda Paine’s Cheers won the 2-year-old Championship. A colt by the Holsteiner stallion Blauer Vogel and out of the Thoroughbred mare Qtrapastree, who is also the dam of Gin & Juice, Cheers also earned the West Coast Born in America award for his score of 81.63.

We went behind the scenes with Dragonfire Farm’s FEH champions “Scotty” and “Pixie” in the barns at Galway Downs, which you can read all about here.