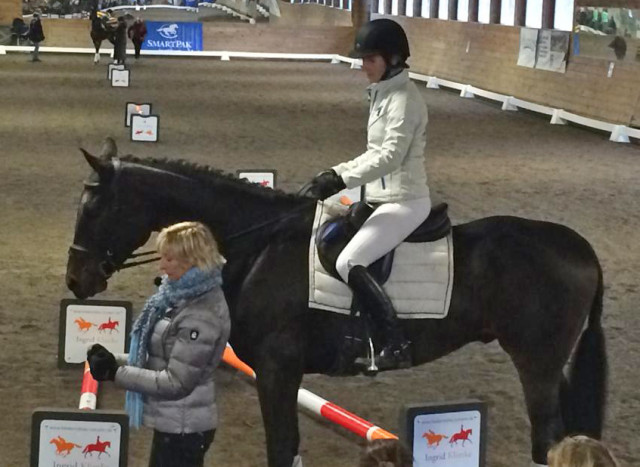 Katie Murphy and Ingrid Klimke at the NEDA Symposium. Photo by Suzanne Adams.

As autumn saturates our New England landscape with leaves of golden hues and flaming reds, I have been reflecting on our season. As reflection comes and goes, my attention quickly turns to the future and what I aim to accomplish in 2015.

My dressage instructor, Leslie de Grandmaison, recommended I apply as a demonstration rider for the New England Dressage Association Fall Symposium hosted at Apple Knoll Farm. I would ride for Ingrid Klimke in front of many people. I was intrigued, doubtful of my acceptance (I am an event rider afterall, and this is NEDA), but the opportunity was very exciting! My application was sent in, and I waited. A day prior to the deadline, I received an email: I had been chosen. I was incredibly excited and humbled.

I can count, on one hand, the number of times Garth has worked in an indoor. The many spectators seated in bleachers, at the base of the bleachers and down the long side of the dressage ring, flash photography (Garth was very surprised) and a sound system added to the exciting environment. Garth handled it well, though was difficult to connect and supple at times, and was truly a star throughout the weekend.

I was one of two event riders of the seven riders at the symposium. Cavaletti exercises began with four walk cavaletti in a straight line, then two trot cavaletti on a bend that were later expanded to four cavaletti. Canter cavaletti exercises, also on a circle, were reserved for the Prix St. Georges horses.

Garth and I were paired with a dressage rider and worked over straight and curved cavaletti lines. For Garth, she wanted him forward with a very active hind end. It was important that he always be accepting of the bit and working into the bridle. For me, my toes were to point forward and my hands were to be close to one another — with the distance of one fist between them — at all times. The cavaletti exercises helped our engagement and suppling. I worked without stirrups for a portion, which I really enjoyed!

On the second day, riders were split for private half-hour lessons. Eventers were asked to ride in their jumping saddles. Ingrid focused on my cavaletti work on a bending line at the trot. Afterward, we did a serpentine with two cavalettis on the canter line, jumped at the canter.

This was followed my two cavaletti placed on the quarterline five strides from one another; adjustability became the focus and we were asked to canter it in five, six and then four. The majority of the work was done down the line toward the spectators, and our focus was compromised.

After our ride, she discussed two bridges used for holding the reins: dressage and eventing bridges. The dressage bridge: the reins are layered and both are held with each hand, one fist distance from one another, with thumbs atop the reins and angled slightly toward the crest. In the eventing bridge, the rider’s dominant hand holds the layered rein and the lighter hand holds only one rein.

Throughout the symposium, Ingrid had several thoughts that remained consistent across all levels:

She was very kind, supportive and encouraging to the horses. When I originally shared my excitement about riding at the symposium, the majority of the reactions were pensive: “Be prepared to be ripped apart.” “Do you know you’re going to be riding in front of hundreds of people?” “They are going to pick you to pieces.”

I was aware of this, and I was still excited. My only question was “How often do you get the opportunity to ride with Ingrid Klimke?” Regardless of the criticism, this was a rare opportunity, and I was thrilled to have been a part of it.

The experience also reinforced something I already knew — Garth is a very special horse. He is a lovely partner. Due to him and our partnership, I have had many wonderful experiences and opportunities. He is years beyond his age in many ways. Ingrid commented positively on our partnership, and I don’t think I could have received a better compliment.

Several times, Ingrid commented on how careful he was through the exercises, how hard he tries and that she “likes this horse.” I hold him in the highest regard and am thankful for every day that starts with his soft “good morning” whinny and muzzle sniffing through his stall bars. I adore him.

A big thank you to Erin Cheever for her video skills! Thank you for riding alongside us.