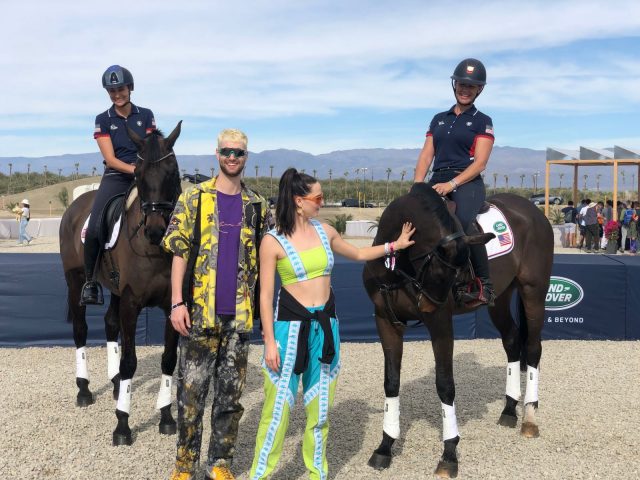 Frankie Thieriot Stutes and Tamie Smith make friends with the locals at the 4xFAR Festival in Coachella, California. Photo courtesy of Tamie Smith.

Horses + music festivals + outdoor adventure + beautiful cars = an epic, Instagram-worthy weekend. The latest festival to hit the scene, 4xFAR, is an adventurous one, and presenting sponsor Land Rover had the idea to bring in some equestrian big guns to showcase the sport at the music and outdoor adventure festival held in Coachella Valley, California at the beautiful Empire Grand Oasis resort this past weekend. Tapped to represent US Equestrian were eventers Frankie Thieriot Stutes with her five-star partner, The Chatwin Group and Elizabeth Thieriot’s Chatwin, as well as Tamie Smith, who brought along MB Group LLC’s MB MaiStein for the adventure.

This festival was aimed at the outdoors-loving attendee, featuring activities such as rock climbing, axe throwing, and survival skills. Meanwhile, brave Frankie and Tamie showed off survival skills of their own aboard Onewheel hoverboards:

The pair of riders also gave some riding demos and were on hand for fan interaction throughout the day. It was a great opportunity to feature equestrian sports alongside other mainstream entertainment and activities. “The festival had all different types of outdoor sports. The US ski team was there demoing a virtual downhill ski simulator as well as goggles that can record your course and playback at speed,” Tamie said. “The food was great and they had concerts playing throughout the day and night. We even both rock climbed and got Jim Wolf and Erik Duvander on the Onewheel.” 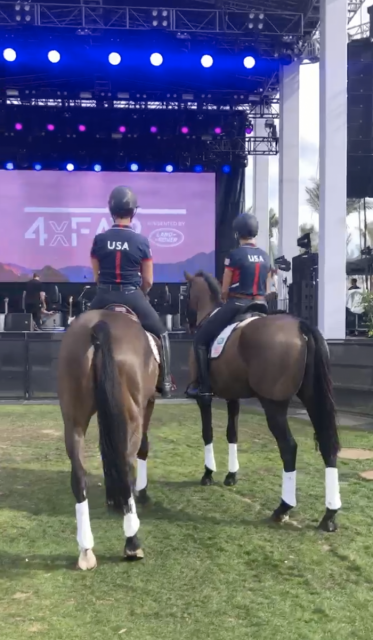 “Chatwin was an ultimate pro but ‘Rocky’ quickly got with the scene and soaked in all of the attention from the spectators,” Tamie continued. “I’m pretty sure he slept all day after his big weekend. It was awesome exposure and great to see all of the amazing Land Rovers! I think the staff said there were over 10,000 people there and they thought the horses were the best part! It was a great way to give back to Land Rover and support such a wonderful company that does so much for Eventing!”

Great day supporting @landrover at the @4xfar in Coachella for @usequestrian high performance!! Super fun showcasing our horses for a great group!!

Creative marketing and exposure is the name of the game for any sport, and this was a perfect opportunity to bring together multiple sports supported by Land Rover to give more people the opportunity to become lifelong fans. “The Land Rover 4xFAR festival was a really fun experience for the horses and us,” Frankie commented. “It was a blast getting to participate in all of the other activities taking place there and also getting to show case our sport and interact with the public to tell them about Eventing.”

Sign me up for the next one — I just need a flower crown. Go Eventing!