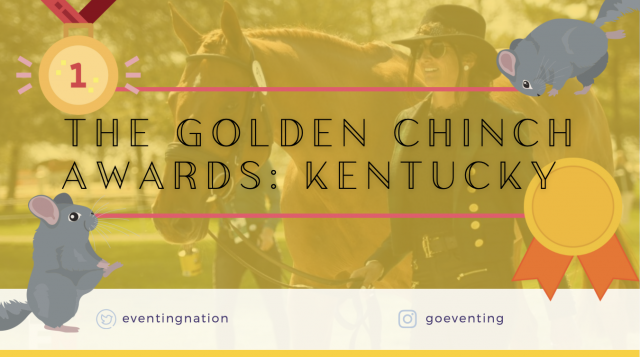 It’s that time again, folks — that special time of year wherein I sit atop my throne of haute couture, casting aspersions about clothes as though I’m not wearing tracksuit bottoms that are two sizes too big and covered with what I think is a bit of liquid joint supplement but might, on second glance, actually be a smear of horse poo. So that’s good and nice. We do really try to ensure that the most qualified people are given the hard jobs here at EN.

Anyway, in a hilarious show of poor judgment, we managed to get a company that’s actually legitimately stylish and sophisticated to back up my spurious sartorial claims. A warm welcome back to Fairfax and Favor, purveyors of fine British footwear and the sole (get it?) reason approximately half the Kentucky field isn’t barefoot right now.

Once again, the kind folks at F&F are offering a seriously good prize to the rider who wins the Ultimate Golden Chinch in this week’s jog awards. Have a browse through the candidates and cast your vote below — oh, and there’s a little something in it for you, too, you fashionable little minx. Don’t say we don’t look after you.

And so, without further ado, let’s take a look at the nominees for the 2022 Officially Unofficial Kentucky Jog Awards. WALK, BABY. 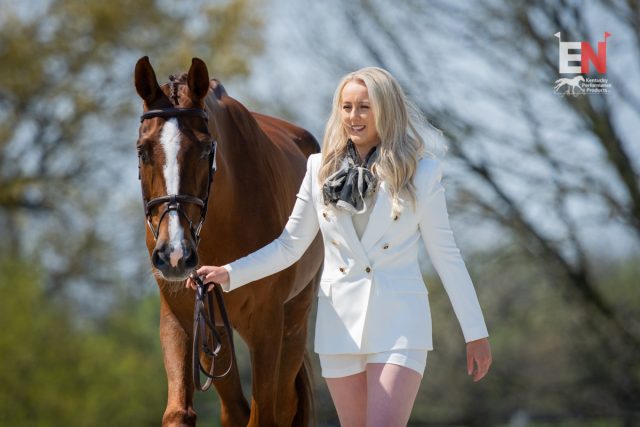 The seatbelt light has gone off, you’ve finally located Bridesmaids on the in-flight viewing system, and now you’re in need of just a couple more things: a packet of faintly cheesy pretzels (are they meant to taste cheesy? I’ve never quite worked out if it’s intentional) and a space gin in a tiny plastic cup that’ll threaten to fling itself off the edge of your tray table if the plane so much as looks at a cloud.

And lo! What light through yonder plane aisle breaks! It is the east, and Yaz Ingham is the sun. Merrily wheeling her cart of snacks and beverages along, she stops at every row for a minute or two too long, because she’s the kind of gal who wants to have a little chit-chat with all her passengers, who she secretly thinks of as her children.

“Ooooh, love, you’re not nervous are you?” she asks a middle-aged woman, who’s sitting rigid and white-knuckled in her aisle seat. “Have one of these; next thing you know, we’ll be landing.” You don’t quite see what she hands the woman, because it’s hidden in a little cocktail napkin, but sure enough, no one hears a peep out of the catatonic customer for the rest of the journey. Yaz is sunshine and rainbows; she warns you away from teas and coffees because “I’m not supposed to tell you this, lovey, but you do not want to know where that water’s come from!”; she quietens screaming babies with a smile and makes even the most pernickety of passengers soften with her charms. At one point, a man in an aisle seat calls her darling and pats her on the bottom, and swift as a flash, she deploys an emergency exit door and hurls him to his death. The door is shut again before the cabin pressure even has a chance to change, and her smile never falters.

“Would you like another gin and tonic?” she asks.

The Golden Chinch for…Hang On, Where Are Our Chinchillas? 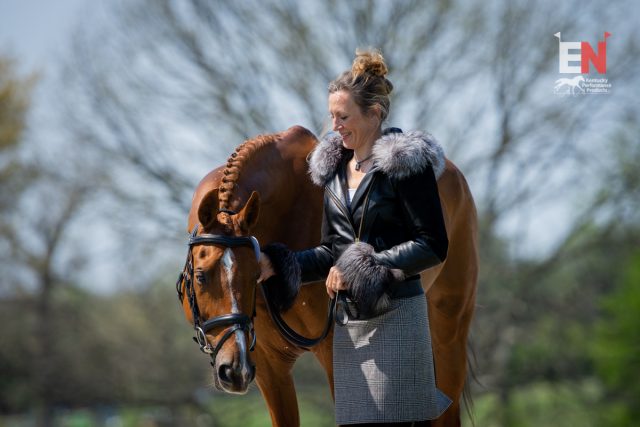 No, seriously, has anyone checked on them?

The Golden Chinches for the Deft Expression of the Duality of Womanhood, as told by Holland Cooper

Hallie Coon and Jennie Brannigan. Photo courtesy of Hallie Coon. By ‘courtesy of’ I mean I simply stole it from her. 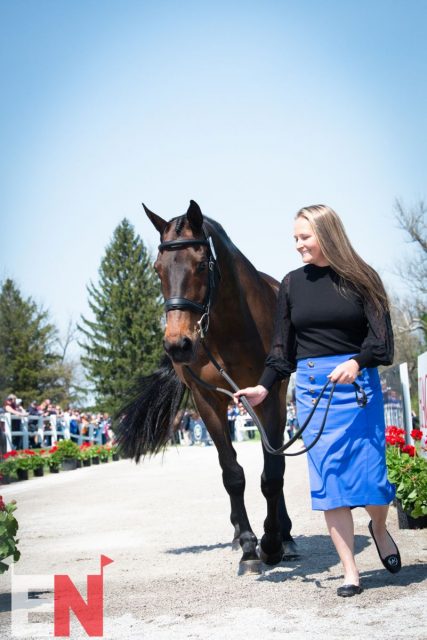 Is it the prim pencil skirt? Is it the staid and sensible loafer situation? Is it the sneak peak of skin through those lacey sleeves? Whatever it is, Hannah Sue Burnett looks like she just finished one of those English lessons in which everyone has to recite a line from the Queen Mab speech in Romeo and Juliet and then beat one another to a pulp for a while with rolled up newspapers masquerading as swords. But somehow, she also kind of looks like she’s having a sordid affair with the principal. Suddenly, we get where Van Halen was coming from. Teacher, do you need to see us after school?

The Golden Chinch for The Most Suspicious Sunglasses 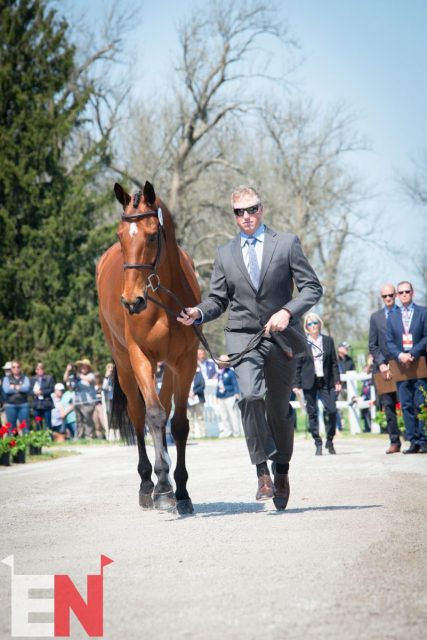 There’s something a little bit uncanny valley about these sunnies, isn’t there? I can’t tell if I think they might be equipped with blink-activated laserbeams, ready to turn a dissenting ground jury to fine powder in a flash, or whether my spidey senses are telling me they’re X-ray specs that can see through all those purple outfits. Actually, the reality of the matter is that they’re probably a very swish looking version of the ill-fated Google Glass, and the reason Doug looks so serious while he’s jogging down the strip is actually because he’s googling “do birds ever just fly for fun?” 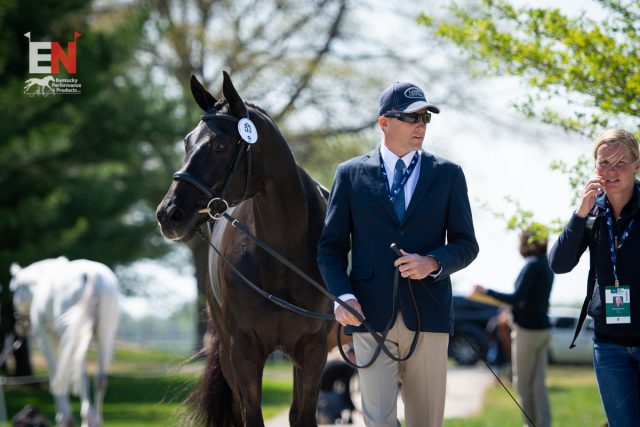 “Look, once you get to second cousins, it basically don’t even count anymore.” 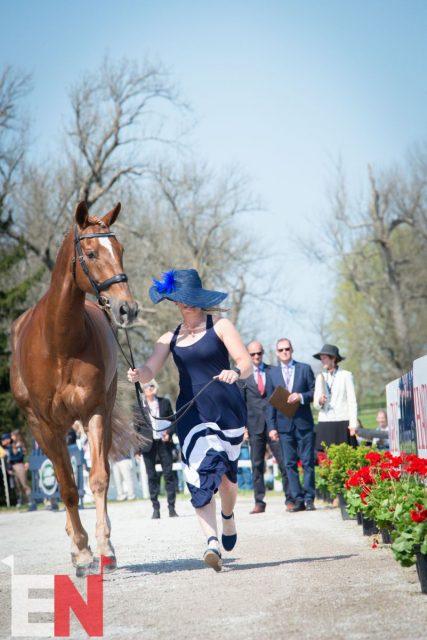 Lisa Marie Fergusson and Honor Me. Photo by Abby Powell.

You’ve got to hand it to Canada’s Lisa Marie Fergusson, who evidently took a stroll around Derek di Grazia’s beefy track and thought, “this? This is it? I only have to gallop at full tilt for eleven minutes over 35 or so maxed out solid obstacles, only some of which are equipped with safety devices? Before that, I only have to attempt to ride around a giant sandpit with a half-tonne animal that’s scared of its own farts? On the final day, I only need to fling myself at obstacles that are the size of four Subway sandwiches stacked lengthwise and spray-painted with some business logos? I thought I was here for some extreme sport, but this is simply disappointing.” And so, to upgrade the experience for herself and many, many rapt spectators, she decided to patent the concept of Danger Jogs™ and go for a blindfolded run alongside a creature that has evolved to essentially be a bad decision on legs. She’s got some brass cajones, that one. 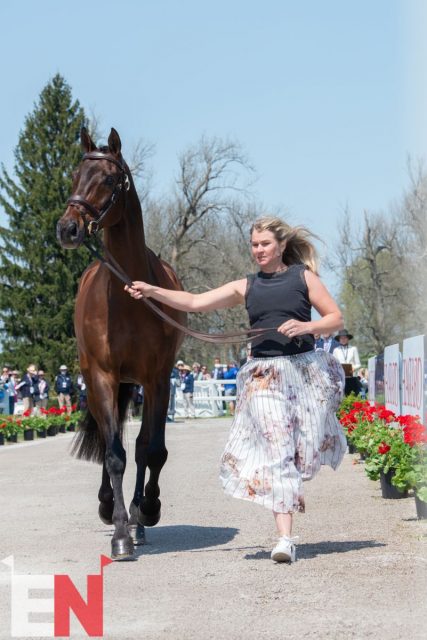 While we’re on the subject of how various creatures evolve, let’s talk about this outfit. I’m a big fan: it’s simple, it’s flowy, it looks comfortable to run in, and it’s, well, sweet. Jonelle looks like the kind of lady who’d bring you a casserole and a freshly baked Victoria sponge cake because she heard you’d worked yourself up a bit over a Hallmark movie. She looks like she might be part of the local school’s PTA. She looks so harmless.

You know what else looks harmless, though? A tiger cub. N’awwww, what a cute big fluffy kitty! Look at its big cartoon eyes! Look at its comically oversized toe beans! Don’t you just want to tickle its fluffy belly and listen to its sweet little purr? WRONG! Now you’ve been mauled to death by a murder machine with no natural predators! It lured you in, and you were fooled, and now you’re done-zo, pal. You’re a goner. That’s exactly what sweet little cookie-baking Jonelle is doing here. You might think she’s real cute now, but how are you going to feel when she’s finished on a sub-25 score and you’re left behind, eating her dust and nursing your wounds? Yeah, I thought so.

The Golden Chinch for Crypto-Bro Chic 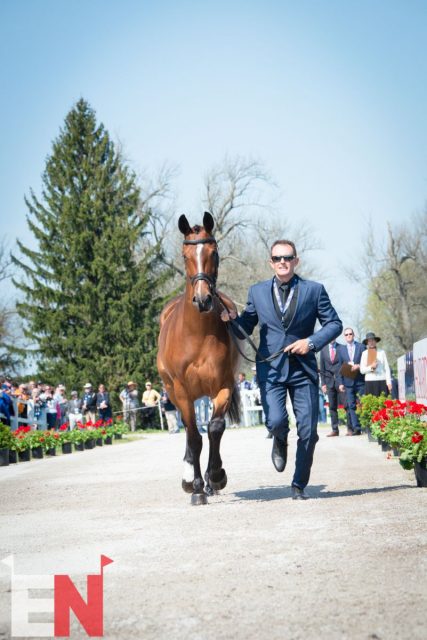 Every time I need to type ‘Bicton’, which is the name of the West Country venue that hosted a pop-up Burghley replacement last year, my phone loses its little mind for a minute and autocorrects it to ‘Bitcoin.’ In this get-up, Bobby Meyerhoff looks like a man who wants to make sure that’s not a typo.

“Hey, man,” he says, cornering you in the stables in a puff of vape smoke and glancing over his shoulder shiftily before continuing. “I don’t know what your, like, money situation is, but you seem like a cool guy. I like you, ya know? So here’s the thing: I just wanted to make sure you had the 411 on the ol’ crypto thing. Yeah, yeah, you know, Bitcoin, Dogecoin, Ethereum – maybe a bit of Shiba Inu? Bongger? It’s the future, man, and you’ve gotta make sure you’re filling your wallet now.”

Sensing that he’s losing his audience, he reaches into his back pocket and pulls out his phone. On the screen is a drawing of a bored ape. It is, perhaps, the most visually unappealing thing you’ve ever seen.

“This could make you rich, my man,” he says, pressing it towards you. “And I can get your name on the blockchain right now. No questions asked. By dressage, you’ll be on your way to your first million.”

You decline and walk away. As you turn the corner, you hear him quietly mutter to himself, “Elon Musk wouldn’t have turned down my apes.”

The “Save a Horse, Ride a Cowboy” Golden Chinch 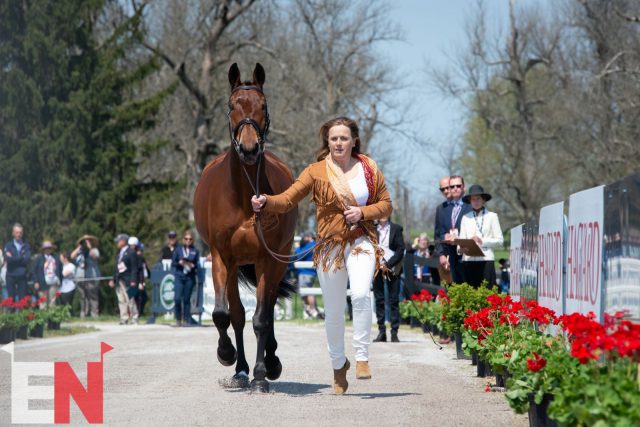 Look, America, we know Pippa’s great, but hands off. She’s our English rose, not your lawless cowgirl hellion, and we don’t know what you’ve done to her over the last few days, but we’re going to need you to stop. If she turns up at Badminton next week and greets the Duke and Duchess of Beaufort with a ‘howdy, y’all’ our country’s entire fragile infrastructure will crumble. The monarchy will end, the red buses will break down, and our little island will be swallowed up by the sea. The only thing that’ll remain is a few tea leaves on the surface. You’ve had that once already; you don’t need it again. She’s our national treasure, damn it, and we don’t like sharing.

The Golden Chinch for Wearing Pink on Wednesday 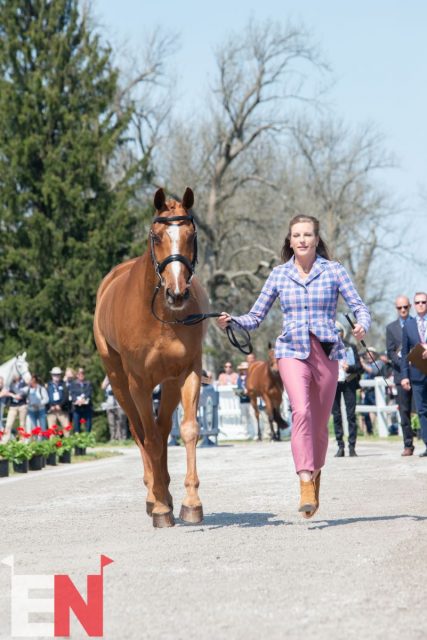 “Is your muffin buttered? Would you like us to assign someone to butter your muffin?”

This is me, wounded and weary after very much jog.

Sonow it’s your turn, dear readers. It’s an important vote you’re casting, to determine our winner, so think carefully and vote by Friday, April 30 at 5 p.m. EST. Whichever rider wins the popular vote will get a glorious pair of highly covetable Fairfax and Favor shoes, which is just about enough incentive to stop any of them from seeking me out for a little bout of fisticuffs, I think. (I hope.)

But it’s not just about the riders: we want you to get your hands on some sweet F&F swag, too. If you’re at the Horse Park this week, head to the Hound & Hare booth and snap a selfie. Pop it on social media and tag us, @houndandhare, and @fairfaxandfavor, and you’ll be entered to win a frankly delightful Mini Windsor handbag. Happy snapping!