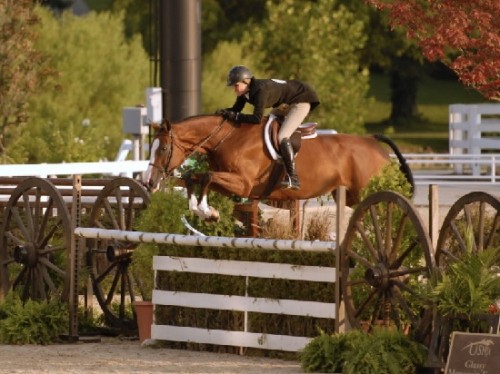 In between World Series innings this past weekend, I caught up with some of the Del Mar International Horse Show coverage on the USEF Network. I like to try and get out of my eventing bubble from time to time and see what else is out there to learn about, and I am glad I did this time! I stumbled upon something called the Grand Prix Hunter Derby Final. Grand Prix? Hunter Derby? Usually you don’t see those terms used in the same sentence. I am breaking this down into the simplest of terms, so I mean no ignorance when I say that “slow and steady” usually comes to mind when you think of a hunter round, whereas “turn and burn” is how most people would describe a Grand Prix class. So how do these two correlate to make one hybrid division?

ProEquest reported on this phenomenon that took Del Mar by storm this weekend. Basically, the Grand Prix Hunter Derby is essentially a classic hunter handy round with a time allowed. Competitors are penalized for going over the time allowed, much like the show jumping phase of our wonderful sport.

“It’s basically a handy hunter derby with a time allowed, where you get bonus points for being under the time, and penalty points for being over,” [show manager Dale] Harvey explains. “The second round is only open to horses that score within seven points of the winner. In both rounds, as long as you were efficient you were inside the times.”

Having an optimum time encourages riders to take on the course at an ambitious clip, and with 3’3” and 3’6” height groups, the class gives horses with different skill sets the option to jump at their preferred height.

I personally think this idea is pretty neat. I actually enjoy watching hunter derbies when they come to town, and I have a lot of respect for hunter riders who can stay on top of a horse that’s cracking its back like it’s on a chiropractor’s table over a jump. Weign in, EN! How do you feel about a speed round in a hunter derby?

Update: Here is a video of the winning round at Del Mar International this weekend.