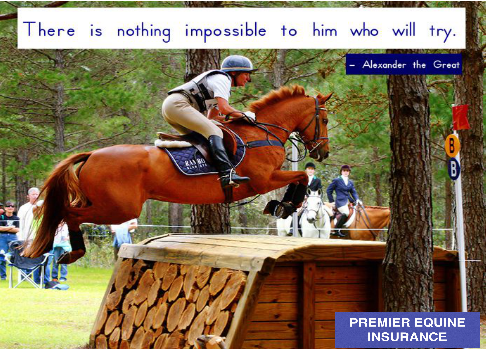 Karen O’Connor and the indomitable Theodore O’Connor. Photo by Regardinghorses.com.

Karen and Teddy kick off our new series of inspiring, entertaining, helpful and otherwise great quotes brought to you by our friends at Premier Equine Insurance.

By definition, Alexander’s quote is officially Great. The guy clearly could have excelled at eventing if he’d taken a break from all that conquering. He won ownership of his famous charger Bucephalus by taming what was a giant, snorting beast. The legend goes the 13-year-old emperor-to-be spoke soothingly to the horse and turned him toward the sun so he could no longer see his shadow, which apparently had been freaking him out. The rest is (ancient) history.

Do you have a favorite training quote? Send it in to [email protected].