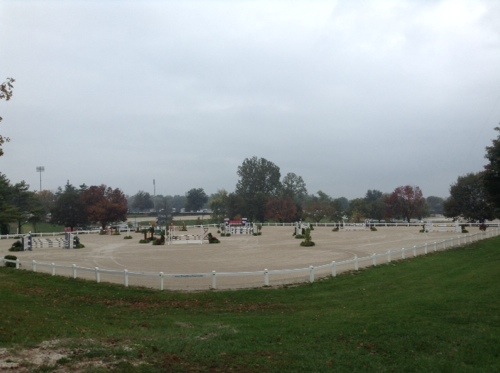 A rainy day for show jumping at Kentucky Horse Park.

The rain clouds settled in over Lexington this morning towards the end of the CCI* horse inspection and did not stop until roughly an hour ago. Needless to say, it’s been a wet and cold day here at the Hagyard Midsouth 3-Day and Team Challenge, but we have still seen some gritty riding across the board. 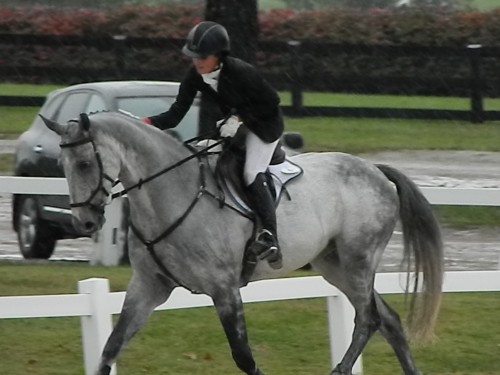 Elinor MacPhail celebrates her winning round aboard Rendezvous With Charly. Photo by Sally Spickard.

The CCI* divisions show jumped today, and the course proved to be quite influential, most likely from a combination of the weather and conditions and the technicality of the course. Rails fell left and right all day, and no single fence seems to be the clearcut “bogey.” A triple combination that was the last obstacle on course caught a lot of riders out after otherwise solid rounds, and several precise turns needed to be executed correctly throughout the course in order to leave the rails up. 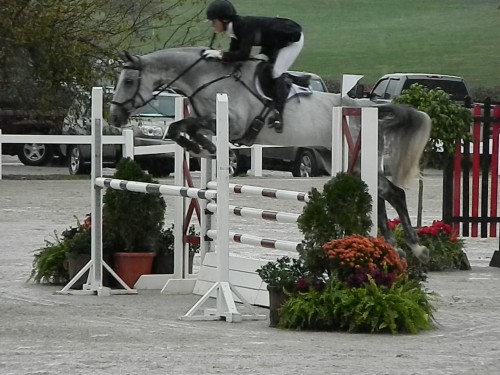 Elinor MacPhail and Rendezvous With Charly. Photo by Sally Spickard.

In the CCI*-A, Elinor MacPhail moved up from third after cross country after delivering one of only five double clear rounds in the A division. Elinor had two beautiful gray horses competing in the CCI* this weekend, and she took home the win on Rendezvous With Charly. She also cruised right up the leaderboard after lying in 16th after dressage to finish in 7th place with her other ride, Shadow on the Wall. Ask me which of her horses was my favorite and I would have difficult answer as they both seemed to make easy work of the show jumping today. I plan to try to catch up with Elinor later so that I can get her take on her strong weekend here at Midsouth.

Overnight leaders in the CCI*-A, Whitney Mahloch and Military Mind, had a wonderful round up until the triple at the end, where she took down two rails to drop to 6th on the weekend. 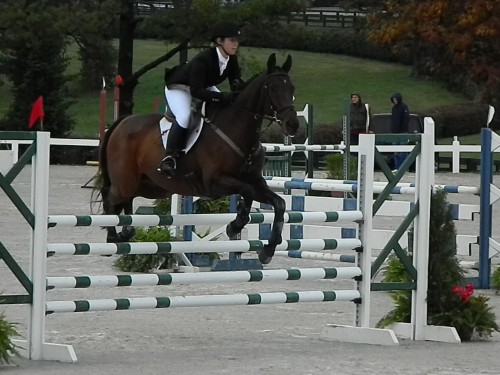 The rain began to slow as the CCI*-B, the Young Rider division, began, and the course seemed to ride a bit smoother for these pairs. Like the A division there were five double clear rounds, and after lying in fifth place overnight, Canadian rider Sophie Calpin and Rolex had a nearly foot perfect round to move up to take first place on the weekend. Overnight leaders Sydney Hagaman and Diablo Tejano also had some rails and just a few time to finish in sixth place overall. 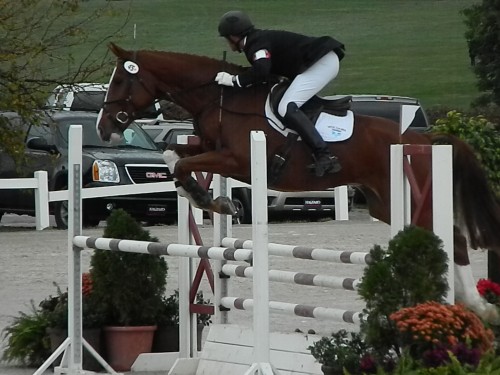 One of my favorite horses today, Esquire, ridden by Alexander O'Neal, 2nd overall in the CCI*-B. Photo by Sally Spickard

I had the pleasure of speaking with several riders from Ontario’s Dreamcrest Equestrian while they caught a bite to eat before show jumping began. Many of the riders in the CCI*-B this weekend were attempting their first event at this level, and several of my new friends were also here for the first time. Overall, the impressions of the Horse Park and the event as a whole have been very positive, and it seems that many of these pairs plan to return in the future.

Stay tuned for more from the Horse Park, including a recap of the Long Format Three-Day divisions. Go Midsouth!

For an idea of the technical nature of this course, coupled with the wonderful weather we’ve had today, check out Whitney Mahloch’s (CCI*-A) round below.