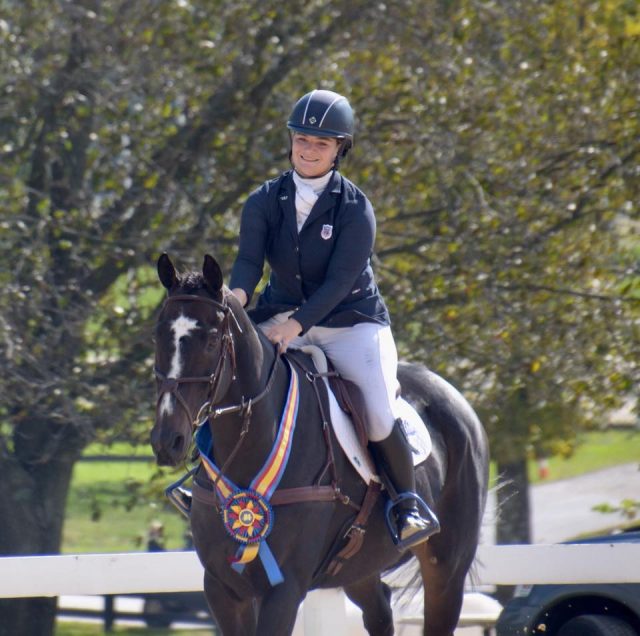 It was a brisk fall weekend at the Kentucky Horse Park, where Hagyard Midsouth Three-day Event & Team Challenge H.T. crowned a number of new CCI1*, Prelim and Training Three-Day and horse trials winners.

After steadily jumping up the leaderboard throughout the week, Robin Walker and Srs Picasso turned in a double-clear show jumping round to clinch the CCI1* win. The pair was fourth heading into the final phase, but rails down from the top three left the door open for them to overtake the lead.

“I couldn’t be happier overall with him,” Robin says of the 7-year-old Irish Sport Horse gelding (Passion x God Mother, by Ghareeb) owned by Sue Martin.

Their partnership began in the fall of Srs Picasso’s fifth year. Robin’s three-star horse, Freedom’s Light, was resting after sustaining an injury at Plantation Field. It be his final competition, as he was ultimately retired, and Robin’s gratitude to Sue for “Sue has been an incredible supporter for me for a very long time. She was very kind to tell me that I could go look for a replacement.”

Robin tried Picasso in Ireland and it clicked. The horse had been lightly produced in Ireland, and Robin was careful to take his time since he’s a big horse and needed time to mature. He also has a big personality and big opinions.

Three years later, the horse has yet to add a cross country jump penalty to his record and completed three CIC efforts before Midsouth. Robin knew the Kentucky Horse Park would suit Picasso’s ground-covering gallop. “He jumped very well all the way around. I didn’t know what horse I’d have on Sunday — I’ve never asked him to go fast properly, and I was very happy that I had a very fresh horse.”

Robin has his eye on Ocala Jockey Club to finish out their season next month. “I’ll go back to putting miles on him now,” he says. 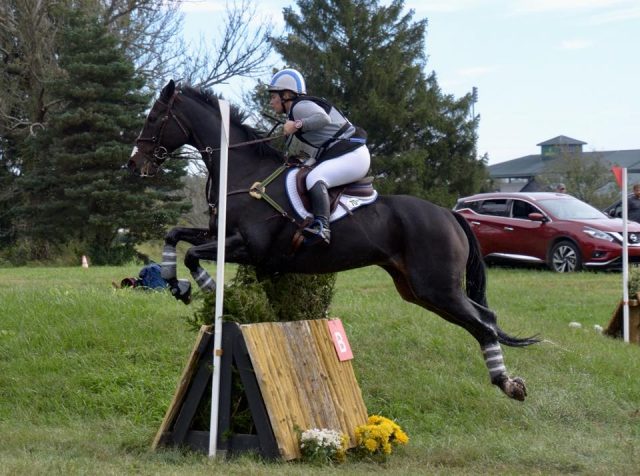 Show jumping proved influential for the YR/JR CCI1* as well, with the leader of the first two phases felling three rails, leaving the door open for second placed Jackie LeMastus and Indian Mill to take the win.

Yes, it’s that Indian Mill, whom Paul Tapner competed through the four-star level before Phillip Dutton took over the ride in 2016. The 13-year-old English Thoroughbred gelding (Millkom x Charwelton, by Indian Ridge), purchased by James Lemastus at the beginning of this year, has plenty of stars to his name but is no push-button ride. “It’s definitely been a learning process, some ups and downs,” Jackie says. “He’s an incredible horse, the coolest guy I’ve ever met, but he demands a certain level of riding. I’ve had to figure out how to ride to his ability.”

Jackie and “Monkee” were second after dressage on a score of 30.5, and Jackie says she was thrilled with their performance. “He is one of the most well trained animals on the flat, but if you don’t ask for it, he’ll be like, ‘no, I’d rather not.’ And you can Pony Club kick him all day long but it has to come from the seat. I’m 5’1″ so that’s been a little bit of a struggle.”

Jackie was first out of the cross country start box with her younger horse, Denver, and after a blow-by at the coffin’s C element she set out with Monkee on a mission for redemption.

“He just flew around,” she said — but in a good, everybody-on-the-same page way. “He’s funny because if you really try to slow down his gallop and fight with him, he’ll basically give you the middle finger and run away with you.”

Jackie has a big grin on her face in her cross country pictures, and she says it was a special moment to come around the final turn and see friends and teammates from the University of Kentucky eventing team cheering her on to the finish. They gave her a hand in the vet box; Jackie says that having a community of fellow riders to share college with has been an incredible experience.

In the show jumping warm-up, Monkee dispensed with an untimely riding lesson, sending Jackie sailing when she saw a big gap to a fence — a distance that Monkee deemed not acceptable. She was next in the ring, so the first-place rider headed on in while she got checked out by the medics. There was some confusion: the announcer said over the loudspeaker that Jackie had withdrawn, which sent Jackie into a panic. “When we went into the ring I was already half crying, thinking ‘did I do something wrong?’ But he was walking around like a prizefighter, and I was like, ‘OK, we got it.'”

Their double clear moved them into first, their first win after four Midsouth CCI1* attempts. “He was just incredible,” Jackie says. “When I heard that we won, I heard my groom shrieking and I started crying and I looked at my mom and she’s bawling and my vet’s crying and my trainer [Elissa Gibbs] is crying. It was incredible to be at the Horse Park because it’s our home base, and to be surrounded by all these people who are your hometown people.”