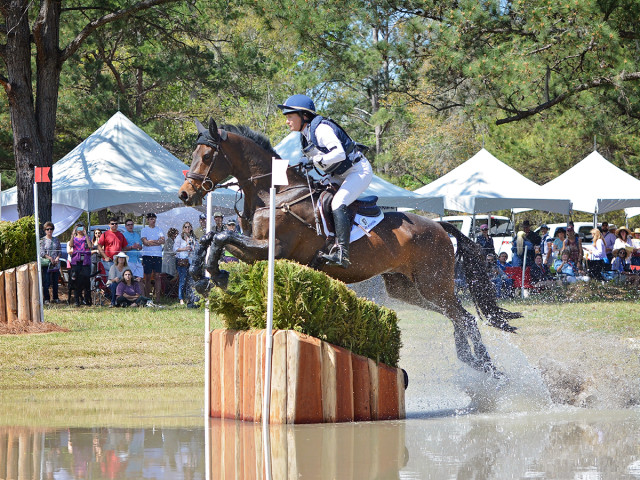 After an exuberant Harbour Pilot bucked her off in show jumping warm-up, Hannah climbed back on and jumped a clear round with 2.0 time penalties to hold their lead on 46.1. Buck Davidson and Petite Flower jumped clear and inside the time to move up to second on 51.3, and Lauren Kieffer and D.A. Duras also stayed on their dressage score to move to third on 52.2.

Kudos to the two other riders who conquered Chris’ show jumping course without adding any penalties: Madeline Backus and P.S. Arianna and Jessica Phoenix and A Little Romance.

Then Mike Etherington-Smith’s cross country course turned the leaderboard upside down again. Hannah and Harbour Pilot, a 14-year-old Irish Sport Horse gelding (Cruising X Shannon), jumped clear with 8.8 time penalties to seal the deal on the win on a final score of 54.9. 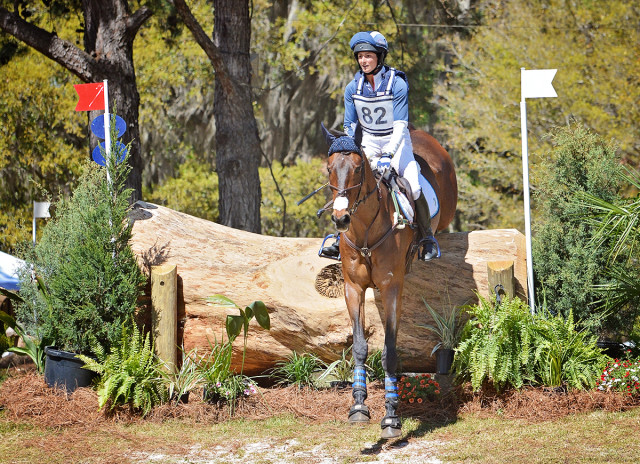 Jessica Phoenix and Don Good’s Bentley’s Best, a 10-year-old Trakehner gelding (Hirtentanz X Hauptstutbuch Baronesse XIII), continued to impress after sitting in third following yesterday’s dressage. While one rail down and 2.0 time penalties added in show jumping slipped them down to fifth, they stormed back to finish third on 69.6 thanks to a clear round and 16.0 time penalties.

Madeline Backus and her own P.S. Arianna, a 16-year-old Anglo-Trakehner mare (Ibsen X Amazing Raven), had the second-fastest time of the day, coming home with 7.6 time penalties to finish in fourth place on 69.8. They added the fewest penalties to their dressage score of anyone in the CIC3* division, which moved them up from 18th after dressage to a top-five finish. 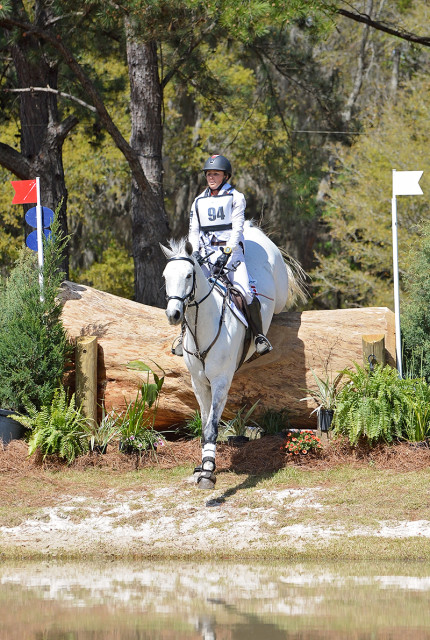 Daniela Mougel and Cecelia, a 14-year-old Thoroughbred mare (Connecticut X Penny Stock) owned by Aurelio Quinzaños and Jorge Castrejon, also had an impressive move up the leaderboard, adding just 2.0 time penalties in show jumping this morning and an additional 9.6 cross country time penalties to finish in fifth place on 71.0.

Phillip Dutton came back with a bang after spending much of the winter season in Pennsylvania caring for his stepdaughter Lee Lee Jones. He delivered six clear cross country rounds in all today, with the Revelation Group’s Fernhill Revelation, an 11-year-old Irish Sport Horse gelding (YOU X Hallo Noble Girl), finishing sixth in the CIC3* on 71.7 after adding 19.2 time cross country penalties.

Hannah finished a second ride in the top 10 with a clear cross country round on Mary Ann Ghadban’s Under Suspection, a 13-year-old Holsteiner mare (Contender X Naomagic I), adding 18.4 time penalties to finish seventh on 72.9. Lisa Marie Fergusson and her own Honor Me, an 11-year-old Welsh Sport Horse gelding (Brynarian Brenin X Dream Contessa), had the fastest time of the day, finishing eighth on 73.9 with 4.8 time penalties. 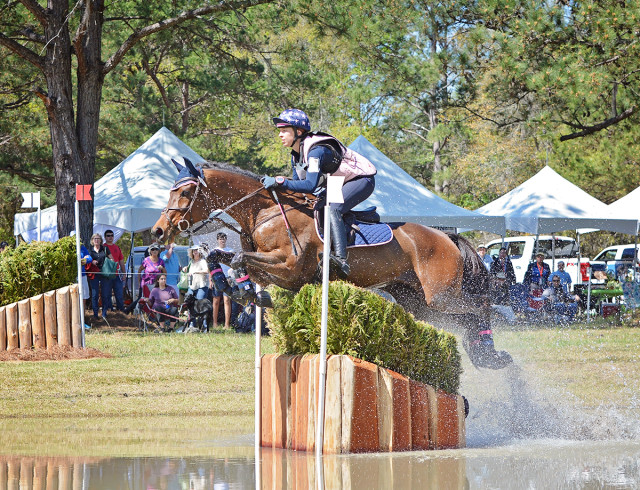 Looking to which spots on cross country caused the most problems, three fences accounted for all of the refusals and falls, with the two water complexes proving to be the most vexing for horses and riders. You can view photos of all the fences on course in our preview.

Buck Davidson retired Halimey after two refusals at the Boathouse, the first water complex. Justine Dutton and Huck Finn also fell at the first water when the horse fell on landing after 8A. She subsequently withdrew Jak My Style and confirmed to EN that she is a bit banged up but OK.

At the second water complex, Lauren Kieffer fell from D.A. Duras when he seemed to get caught up on the back side of the triple brush at 15C, sending Lauren out the side door. She subsequently withdrew Veronica from the Advanced division. 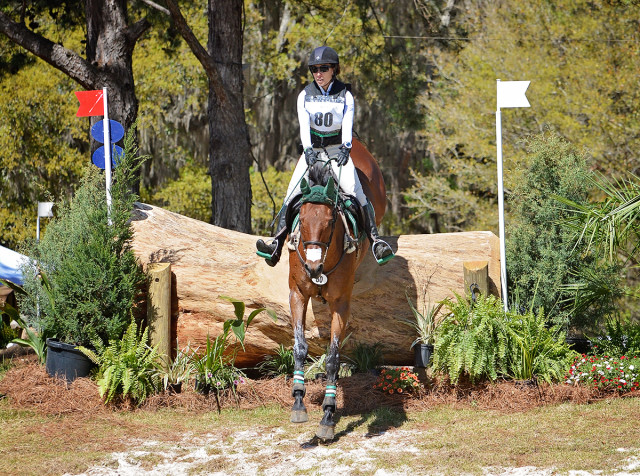 Boyd Martin also fell at 15C when Tsesterleg glanced off the triple brush to the left, sending Boyd somersaulting right over the fence. He was up and OK and his since posted the video on his Facebook page.

Caroline Martin and Danger Mouse had a glance off at 15C at the second water complex and successfully re-routed to the option. Lizzy Jahnke and Princeton had a refusal at 15B, a triple brush in the water, and continued on with no other problems.

The corners at fence 21 also caused trouble, with Jessica Phoenix and A Little Romance picking up 20 penalties there, as well as Buck Davidson and Petite Flower, who were sitting in second place after show jumping.

It’s a very busy day here at Red Hills, and CIC* cross country is still running. We’ll have much more to bring you on the other divisions soon. Clayton Fredericks’ and Katie Ruppel’s Houdini lead the CIC2* after cross country, and Selena O’Hanlon and John and Judy Rumble’s Foxwood High held their lead in the Advanced. Stay tuned. Go Eventing. 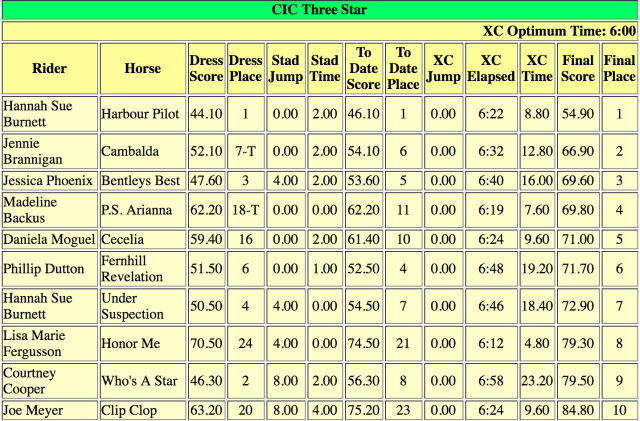