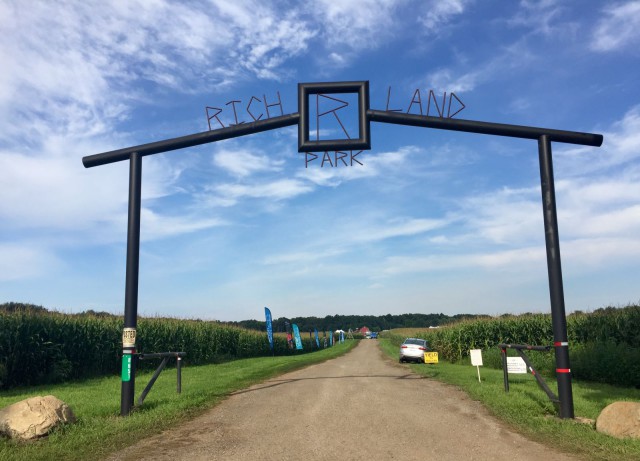 Every edition of Richland Park is special but 2016 marks an extra exciting landmark in the event’s history. It’s Richland’s 15th anniversary horse trial — here’s to you, Richland!

The story of Richland dates back even further than that, to a dream whose roots extend all the way back to 1985. That’s when Bob and Kay Willmarth purchased Richland’s first parcel of land, a 20-acre farm that included a land contract for an additional 60 acres.

The couple, who are also celebrating their 40th wedding anniversary this year, became interested in the sport after attending Rolex as spectators. 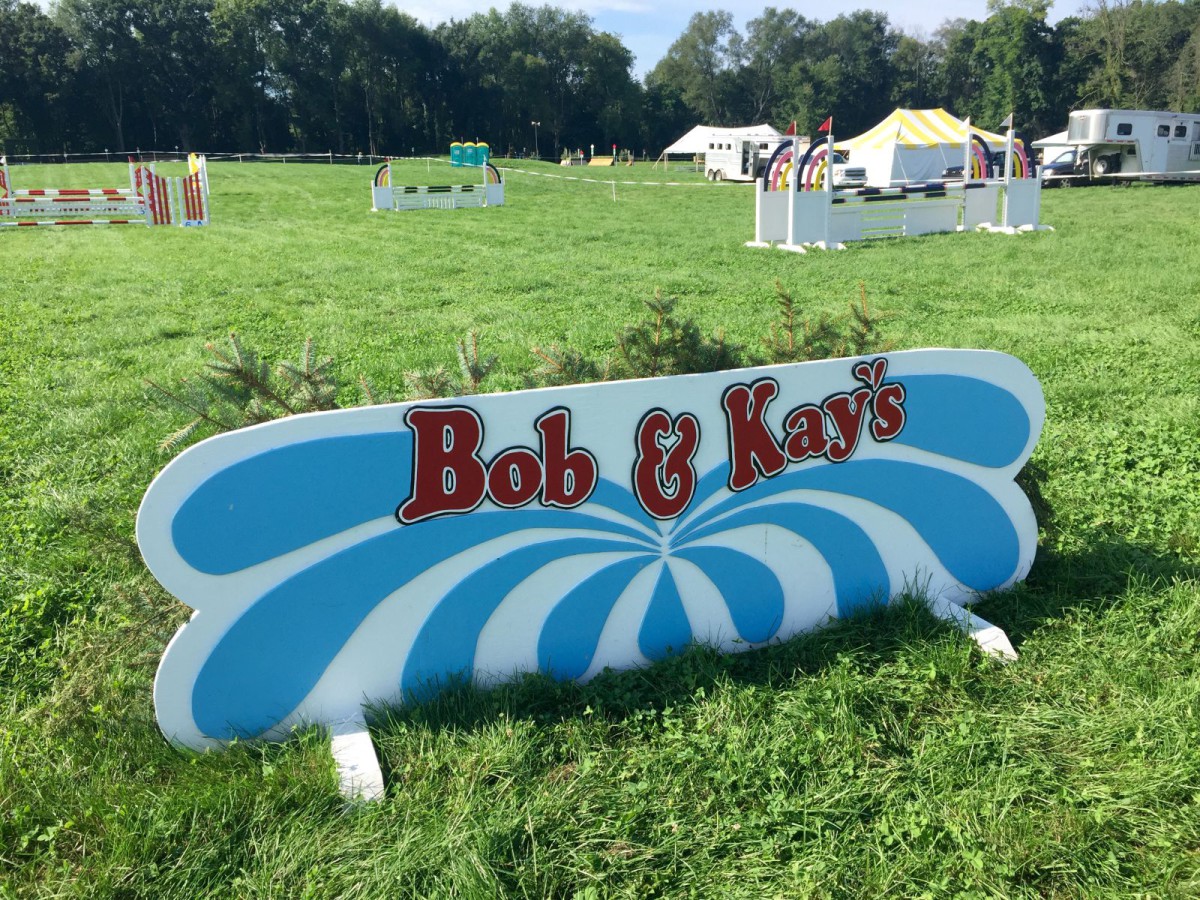 “We went to Rolex and Bob came back and said, ‘I want to do that,'” Kay recalls. “And so he started working with someone and started eventing at lower levels and I started doing it too.”

They tossed around the idea of hosting a horse trial but knew they didn’t have quite enough land to pull it off. When the 240 acre farm surrounding their property became available in 1993, Bob and Kay seized the opportunity to acquire it, and purchased the final 20-acre piece of land in 2000. 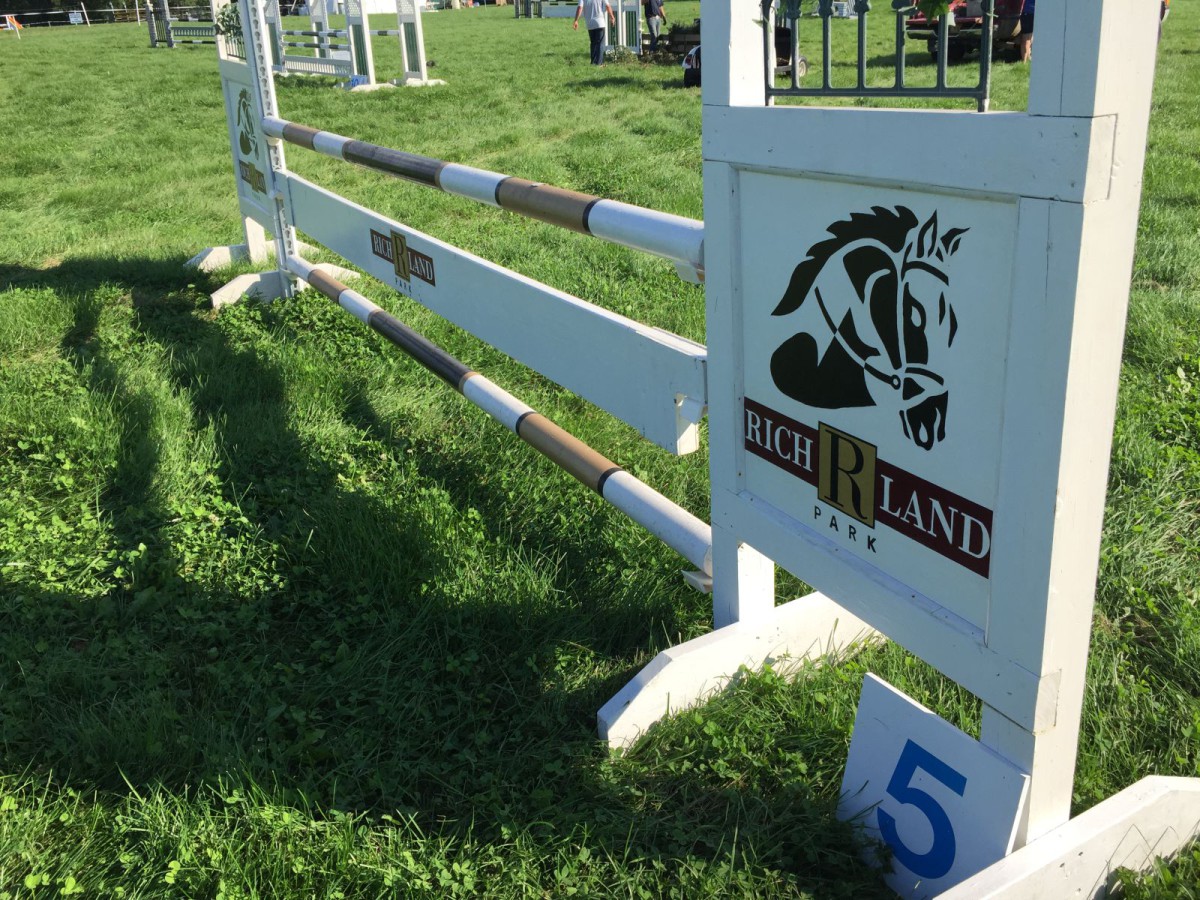 “We ended up with almost 400 acres and we thought, ‘You know, this would be a good place to have a horse show.’ So that’s how it started,” Kay says.

Now Bob and Kay had the land; they just needed a plan and some guidance. Their instructor Robin Walker, who is competing in the CIC3* this week, introduced them to international course designer Mike Etherington-Smith. They met up with Mike at the Radnor Hunt International Three-Day Event in the fall of 2000, and he agreed to come to Richland the following spring to design the Novice through Prelim cross country courses, as well as offer a layout for the dressage rings, show jumping greens, stabling and parking areas. 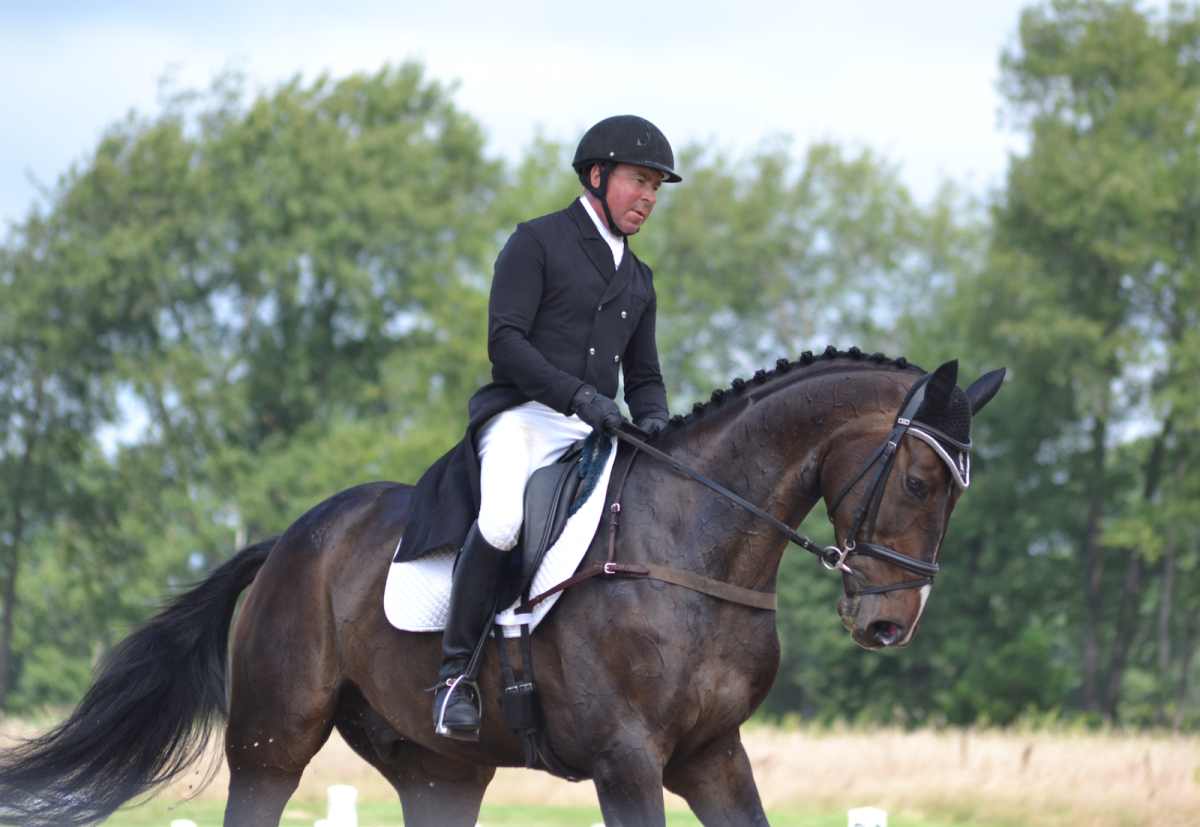 If you build it, they will come — and indeed the eventing community did just that.

“We had 85 riders the first year and then it doubled every year until it got crazy and now we’re basically full every year,” Kay says.

Following the inaugural event, Mike and Bert wasted no time developing the upper level tracks, replete with two water complexes, a sunken road and ditch complexes. An Intermediate level was introduced the second year, and an Advanced course the third. The event began offering FEI divisions in 2007. Ian Stark stepped in for Mike as designer in 2009, while original builder Bert Wood continues to endow the course each year with his creative vision. 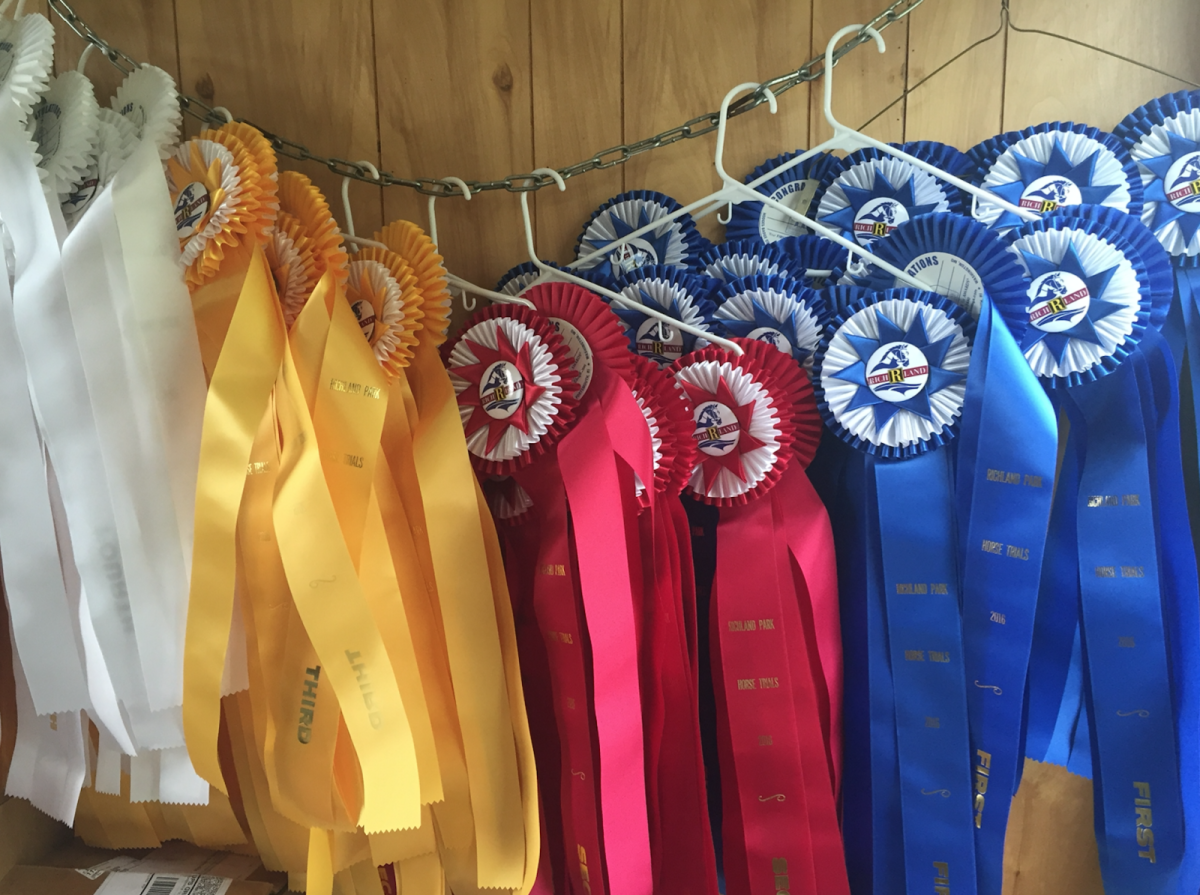 Running a large-scale event like Richland isn’t just a summer commitment but an endeavour that extends year-round. And, Kay is quick to note, it takes a village.

“We have a fab corps of volunteers that help out, really dedicated ones who work almost as hard as we do and are there at a moment’s notice to help,” she says. “Our farmer that farms the part of the property that we don’t have the show on, he put in all underground irrigation so we can irrigate the cross country course which makes for the good footing.”

Indeed, the passion Richland’s volunteers have for the event is apparent. You’ll never be greeted by nicer parking attendants on the way in … 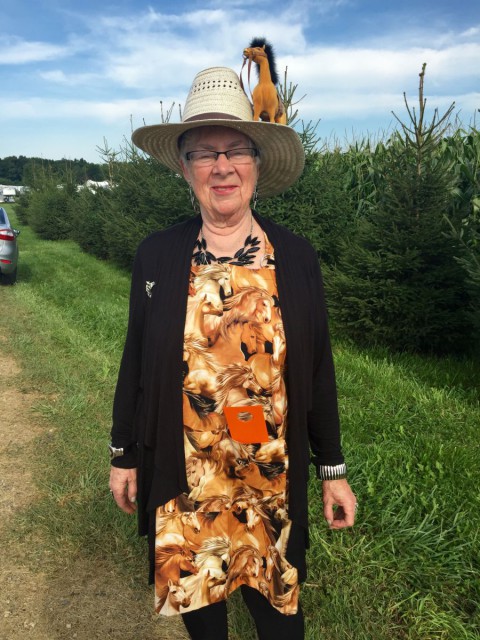 Faye is out directing traffic today — although she might just cause a traffic jam in that getup! Love it. Photo by Leslie Wylie. 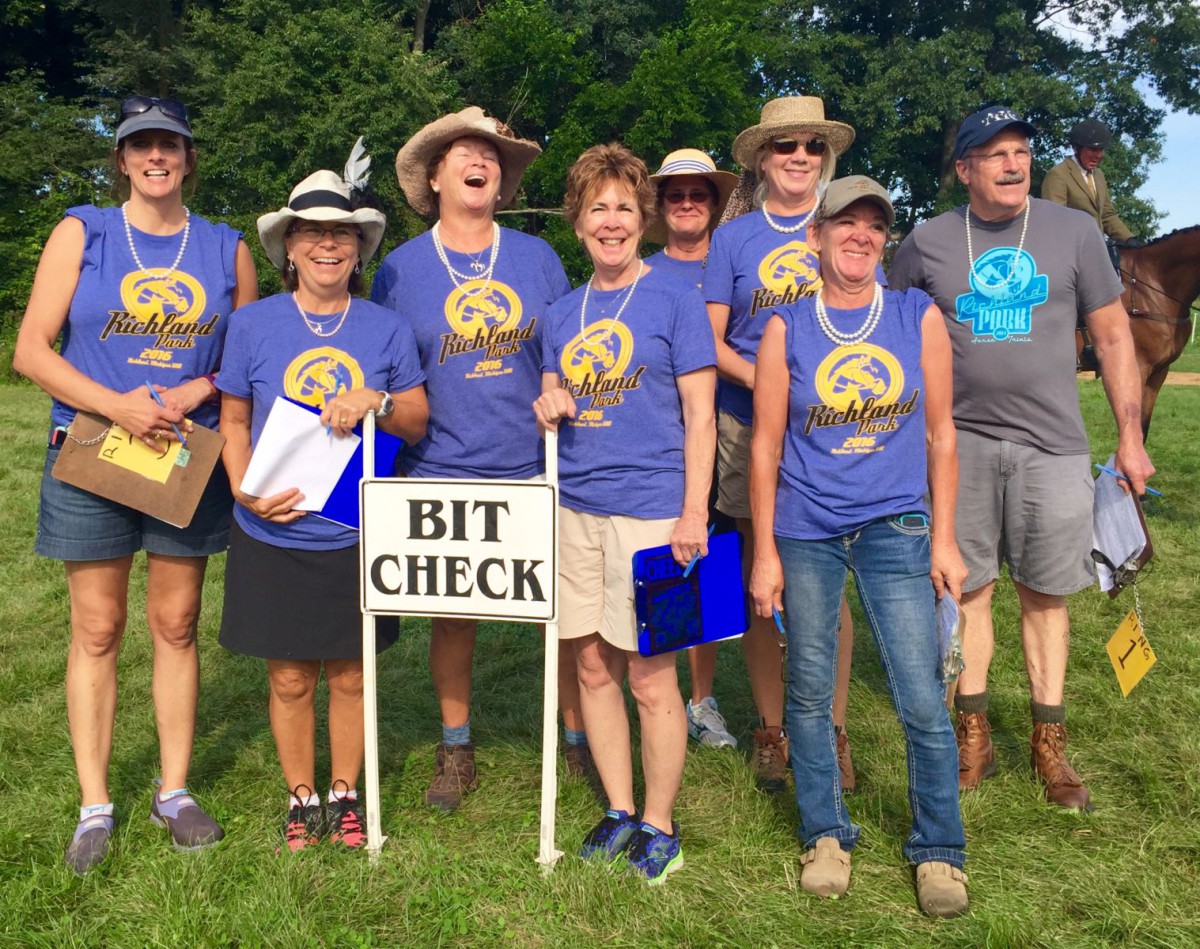 And good looking! “Girls in Pearls” is a Richland Park tradition. Says the lone gentleman in pearls, “I feel comfortable with my feminine side.” Photo by Leslie Wylie.

The volunteers number in the dozens and their names are too myriad to list, but you can find a complete roster of who is doing what this weekend here — each and every one deserves a big thank you!

“It’s a labor of love for us and our neighbors and friends and families,” she says. But when that week in August rolls around, and their farm in the middle of a cornfield is transformed into a mecca for eventers from around the country, it’s all worthwhile.

Watch our full interview with Kay:

Happy 15th, Richland, and keep it locked here for updates from the event throughout the week! 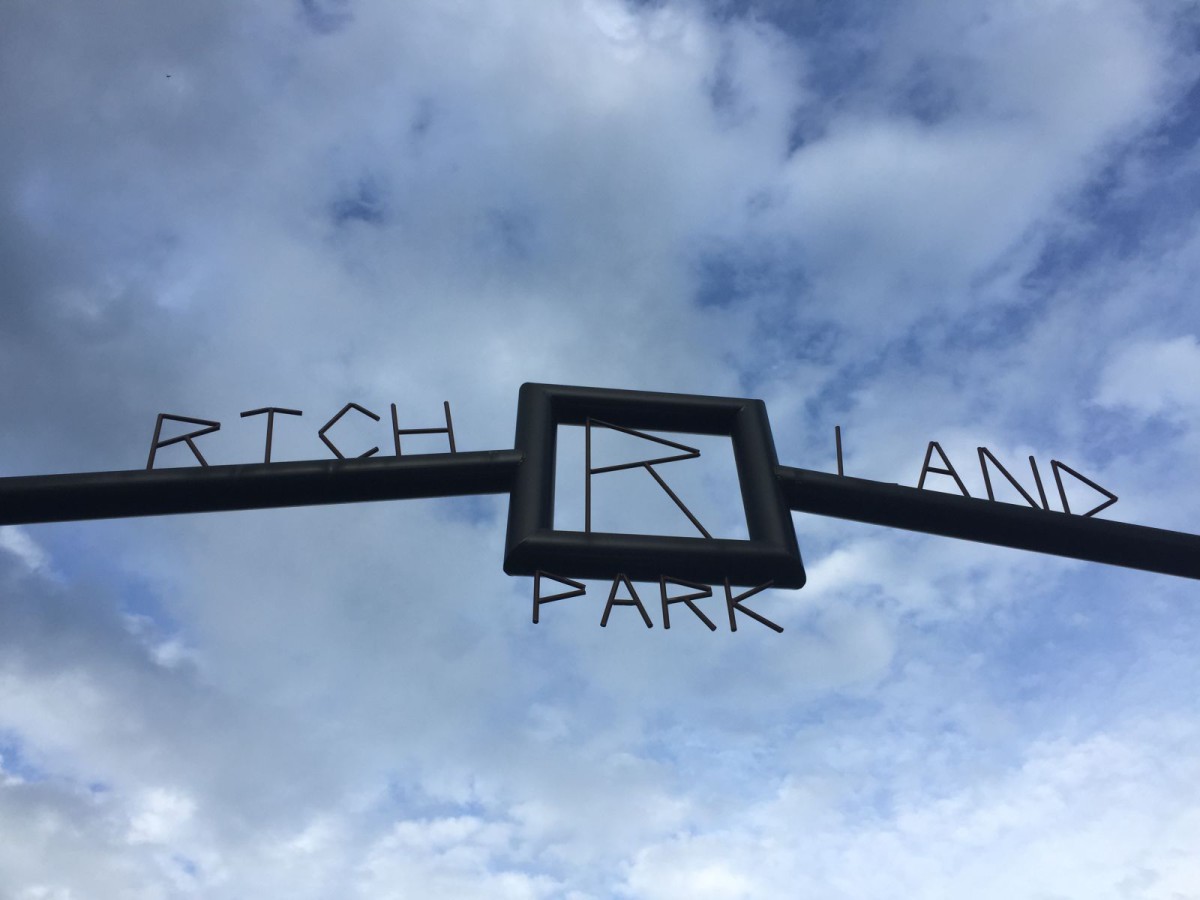