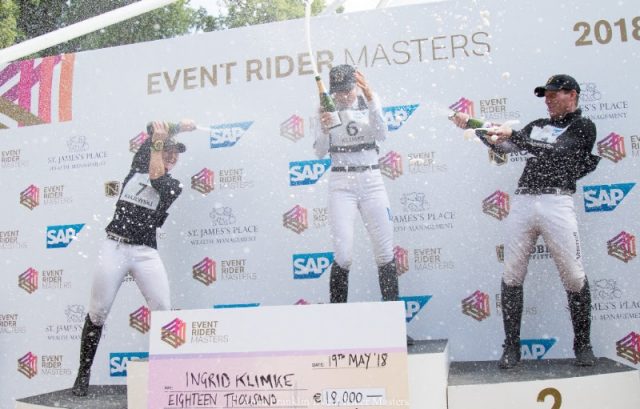 Germany’s Ingrid Klimke clinched her first Event Rider Masters win this weekend in the second leg of the 2018 series aboard her own SAP Hale Bob OLD. The newly-crowned queen of Wiesbaden, Ingrid was pegged as an Equiratings favorite to win, and she delivered with the 14-year-old Oldenburg from start to finish.

They began the weekend on a score of 22.2—just higher than their personal best of 18.2 at this venue— and a clear show jumping round on Friday afternoon kept them out front, but just barely. FEI World Number 1 Oliver Townend was hot on their heels with Cillnabradden Evo, a 12-year-old Irish Sport Horse owned by Sally-Anne Eggington, on a score of 22.8 – and ERM personal best for the British rider. 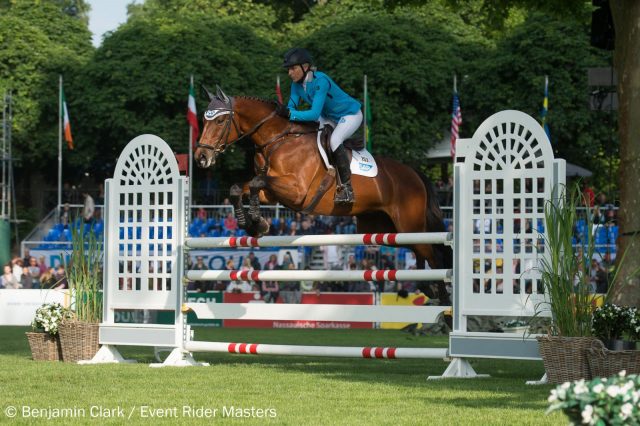 Ingrid and Oliver were two of six pairs to master a double clear show jumping result. They were joined by Julia Krajewski, Tim Lips, Andreas Ostholt and Ludwig Svennerstal.

Wiesbaden produced both the highest ERM completion and cross country clear jumping rates, so the pressure was on as the top riders entered the start box. Ingrid and “Bobby” rose to the challenge, finishing two seconds quicker than Oliver to secure the 18,000 Eruo prize on a final score of 23.8.

“Bobby did such a wonderful job today. It was the best feeling to ride through the Schloss Park with so many people cheering us on,” she said.

Though he dropped one level on the podium, the 2016 ERM series champion still finished the weekend with only 2.4 time penalties added for a three-phase score of  25.2. “I am thrilled with the horse,” Oliver said. “To get so close to Hale Bob is very special and I couldn’t be happier with how he has performed.” 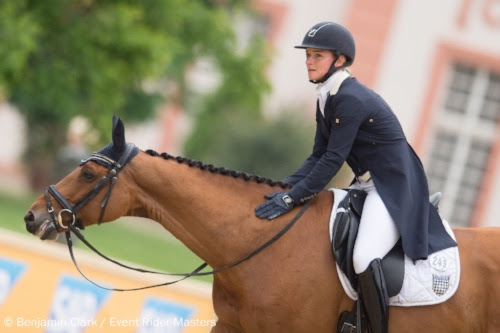 “’Sam’ loves it here and he’s always been really comfortable in front of all of the people watching him,” Julia commented. “I was maybe a bit conservative at the start but by the end I could let him run and jump. He really loves his job and I love riding him. I am very proud to share the podium with two legends.”

Finishing results really were record breaking this weekend, with 21 of the 24 cross country starters finishing without jump penalties. Despite this, the time is notoriously tough at Wiesbaden, and this year was no different. Only two pairs— Tim Price (NZL) with Cekatinka and Ludwig Svennerstål (SWE) with El Kazir SP—finished within the optimum time.

Ingrid’s win this weekend currently ties her with Leg 1 winner Piggy French (GBR) in the overall standings, both with 30 points. For full rankings, click here. There’s still a lot left in this ERM season, and next we look to Arville, June 23 & 24. As always, you can watch all the action for free at eventridersmasters.tv.