“It’s an amazing job,” says Jess Errington, as well she might. Working for one of Britain’s top event riders, Harry Meade, also the title holder of Probably The Nicest Man In British Eventing, Jess is in the enviable position of being Harry’s right-hand woman.

Harry, notably the son of the late, great Olympic eventing gold medallist Richard Meade, was the youngest rider to win the Armada dish for five Badminton Horse Trials completions, and has completed Badminton nine times. He has an impressive string of horses at his Gloucestershire yard across the levels, with recent successes including first and fourth place at the two star Millstreet Horse Trials in Ireland, riding Vrolijk and Tenareze respectively. 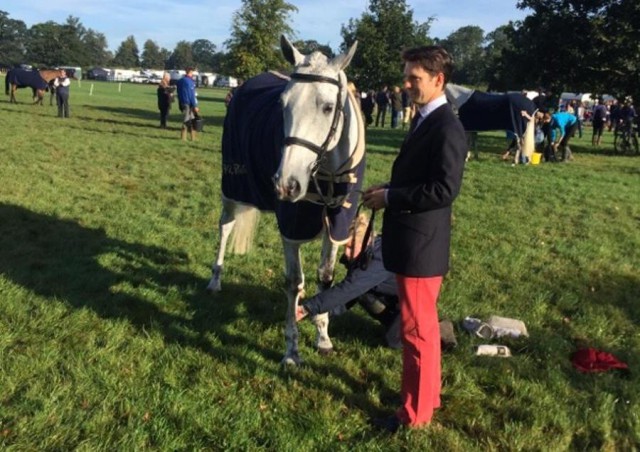 “We were all thrilled…”

Jess recently returned home from the UK’s Blenheim Palace International Horse Trials and is full of praise for Away Cruising, the 9-year-old that has stepped up to three-star level this year. Harry and ‘Spot’ placed 22nd after a sterling performance at the iconic Oxfordshire event. The pair also placed 19th at Bramham International and 21st at Chatsworth International, both British three-stars, earlier this year, and are showing great, consistent form.

“We were delighted with Spot at Blenheim,” Jess says of the horse that was named by his owner Charlotte Opperman when he had a few spots on his grey coat as a 4-year-old. “Harry did a very nice dressage test and got the mark he expected, and then did a great cross country round. The show jumping isn’t Spot’s best discipline, but he tries so hard, and we were all thrilled. The horse’s show jumping is really coming along, and we have high hopes for next year.” 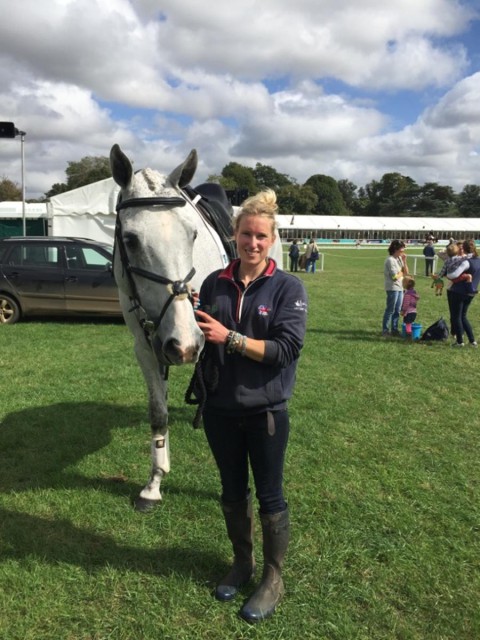 Jess Errington and Spot at Blenheim. Photo by Rosie Meade.

With Osberton Horse Trials finishing the season off shortly, and the team currently at Gatcombe Horse Trials with an astounding ten horses, Jess certainly has her work cut out in terms of organisation and preparation! “It is just myself and one other person grooming at Gatcombe, and Harry’s work rider will also ride a couple of the horses that we’ve taken,” Jess says.

With 20 horses at the yard and around ten being Harry’s own string of promising eventers, life is certainly busy. The top horses are Away Cruising (12), Orlando (15), Tenareze (9), Vrolijk (14), and the seven and six year olds, Catherston Definitive and Cavalier Crystal, who have both contested one-stars this year.

Jess has been working for Harry since the rider was 24 and starting out himself. “I always wanted to be a groom, but lacked some confidence in my abilities when I was younger. I went through the UK college system, and undertook six weeks’ work experience each with show jumper Tim Stockdale and eventer Jeanette Brakewell,” she said. “I enjoyed both stints, but realised eventing was for me. I joined Harry’s yard in 2008, initially as a working pupil, and have stayed ever since. Once I knew I would never be a top level rider, this was the next best thing.” 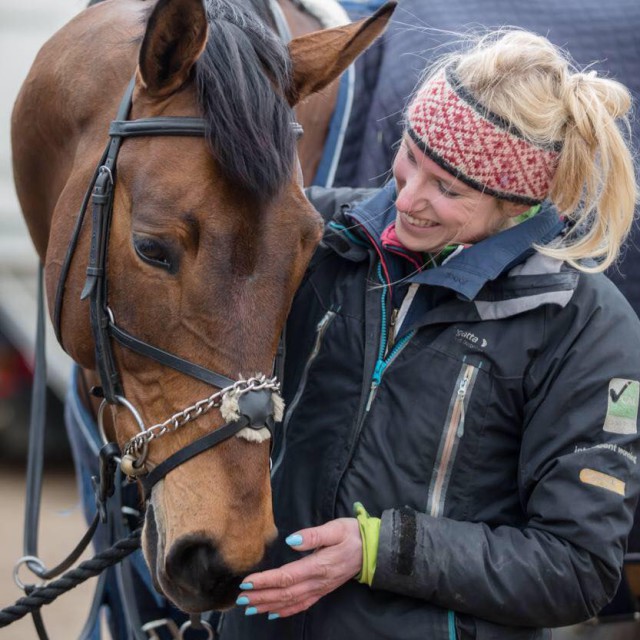 Away Cruising, the grey pictured above, and the bay Tenareze pictured here, are Jess’s favourites at Harry’s yard. Photo by www.hannahfreelandphotography.co.uk

Jess admits she ‘doesn’t ride much’, saying that her skills on the ground are much better. “I let other people ride, as I know my strengths,” she says. “Harry jokes that I am far too valuable to be riding horses anyway.”

Saying that while she’s fond of all the horses at the yard, Away Cruising and Tenareze are her favourites, Jess adds that she loves to see the horses progress and be expertly produced through the ranks by Harry, from youngsters to successful advanced horses.

Harry is genuinely highly regarded within the eventing community for his sympathetic riding, family values and polite and charming nature. “He’s great to work for, and has a loving family,” Jess says of her boss’s wife Rosie, and young children Lily and Charlie. “It is jolly hard work here but I love it; I am committed to Harry and the horses, and believe it to be an amazing job. I am so lucky.”

Harry needed all the support he could get back in 2013, when a rotational fall at the UK’s Wellington Horse Trials caused his elbows to catastrophically shatter and dislocate. Despite being told he may never ride again, Harry went on to claim third at Badminton in the four-star nine months later with the now-sadly-missed Wild Lone.

“I am quite a calm person, so the enormity of it all didn’t really hit me until we got home from Hampshire after the fall,” Jess tells EN, of the accident. “My priority was the horses, and keeping everything going for Harry. We had a great team, and I just stayed dedicated and loyal, so everything would be OK if and when Harry was able to return to competition. The worst part was not knowing.” 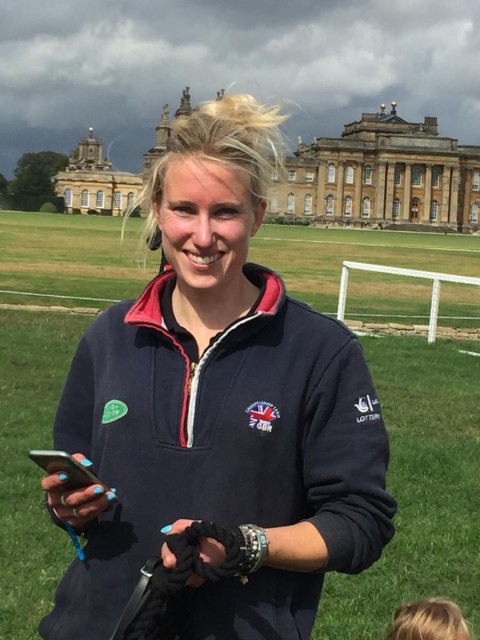 Jess Errington says her boss Harry Meade is “A lovely person and a wonderful rider.” Photo by Rosie Meade.

Harry went onto have an amazing recovery. “He’s so determined,” Jess adds. “Harry deserves it, as he’s such a lovely person and a wonderful rider.”

Jess, a member of the British Grooms Association, which offers support to UK-based grooms and British grooms who work abroad, has travelled extensively with Harry, including to the 2014 World Championships in France where Harry was part of the silver medal winning British team. However, she cites Aachen and Badminton as her favourite horse trials events. “Aachen has amazing facilities and Badminton, aside from being close to us, holds such special memories, with Harry’s comeback there in 2014.”

Plans for 2017 include giving the young horses more experience at their respective levels, and contesting some big three-stars with Orlando and Away Cruising. “We just like to keep progressing the horses at their own pace with some confident runs,” Jess adds. “We take each week and month as it comes, and can’t wait to showcase the current string to their lovely owners and Harry’s loyal fans.”