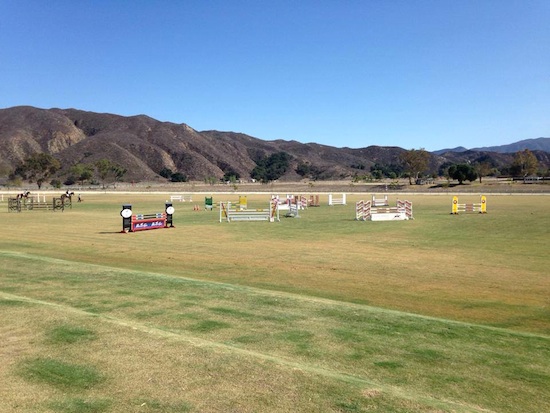 Makes you want to move to California. Photo via the Galway Downs Facebook page.

Good morning, EN! Today the competition officially kicks off out in California at Galway Downs with the YEH dressage and confirmation phases. Some exciting names have up-and-coming horses entered in the 4- and 5-year-old divisions, including 2008 Olympic silver medalist Gina Miles and Jennifer Wooten. The first horse inspection for the FEI divisions and Training 3-Day will take place Thursday, and dressage for those divisions will run on Friday. We have several guest bloggers who will be sending us reports throughout the weekend, so keep checking back for more coverage!

Lynn Symansky blogged about her Pau experience for The Chronicle. Lynn wrote that the cross country track was unlike anything she had ever come across, and that she was happy to have timed her training regime correctly so that Donner was at his absolute peak during the event. While Lynn is obviously over the moon about the performance she and Donner put down (as she should be!), like any good competitor she still sees some room for improvement. “Complacency and accepting what is merely good enough is not going to make Donner and I better or more competitive. This self-reflection is imperative to improve my own riding and all of my horses’ performances,” she wrote. [The Chronicle]

Watch out Bruce and Buck, a new eventing dynasty is rising quickly. Mary King’s seventeen-year-old daughter Emily King is “taking the UK’s eventing calendar by storm” with the 11-year-old Brookleigh. The pair won the under-21 national title and were third in the Advanced division at Gatcombe this summer. Unfortunately her star mount is for sale, and Emily is currently seeking sponsors to purchase the horse so that she can continue to compete him. Her goal is to make it to Rio with Brookleigh in 2016. [Express & Echo]

Phillip Dutton will be signing copies of his book Modern Eventing tonight in Middleburg at 6 p.m. at the National Sporting Library & Museum. The event, hosted by Paul Cronin, will also feature a presentation from Phillip on “How the Olympics Have Shaped Our Sport from Atlanta to London.” More information on his Facebook page. [Phillip Dutton Book Signing]

Happy Halloween from SmartPak! Check out this blog post with some of their favorite horsey Halloween costumes. I can’t believe how bomb-proof some of those ponies are… [SmartPak Blog]

A new study has found that mature horses prefer shade to direct sunlight during summer months. Research into horses’ shade preferences was conducted by researchers at the University Of California, Davis. The study revealed that horses stood in shade 7.1% more during daylight hours than would be expected by chance, particularly during the midday hours and late afternoon. Researchers concluded that “shade provides horses significant physiological benefits, even with limited use, and when given the choice mature horses show a preference for using shade in the summer.” They also note that this study tested preference, not need, and additional studies will be needed to determine what amount of shade horses require. [The Horse]