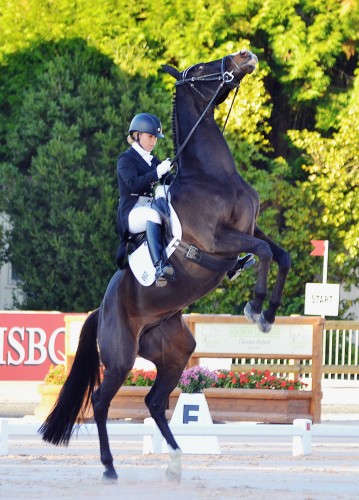 Have you ever wished you could stuff your Point Two air vest underneath your coat for show jumping? Or dressage … if your horse has a penchant for doing a Black Stallion impression in the little white box. Now you can thanks to Alexander James, a British clothing company that worked with Point Two to create a coat that truly conceals an air vest, Horse & Hound reports. It’s a dapper option for those of us who wouldn’t mind — or whose orthopedic surgeons strongly suggest — a little extra inflatable protection without resembling a beer keg in a blazer.

“We’ve inserted a side panel made from stretch fabric underneath the arm and in the sleeve,” said Alan. “From the front and back it looks like a traditional hunting coat, although it is made in a slightly lighter weight cloth.”

Duke of Beaufort’s subscriber George Kershaw has had a stretch fabric panel inserted under the arm of a blue and buff coat for this season, having purchased a Point Two Hunter last year.

“Hunting is our fastest growing market,” added Lee Middleton, managing director of Point Two. The firm has a special model of the air vest designed for hunt followers, with a flusher fit to the body, and no logo. “Hunting folk tend to be quite conservative and new ideas catch on slowly, but my guess is that in 5 years time these will be as common as straps on hats, especially now they can be worn underneath your hunting coat,” concluded George.

Sleek, classy protection ain’t cheap: the jackets start at $980, plus shipping across the pond. Each one is made to order, as are most of the clothing items the company sells, including tweed sidesaddle outfits (with matching iPhone cases) and white bridal sidesaddle habits. Would you consider purchasing a special coat like this to conceal your air vest?