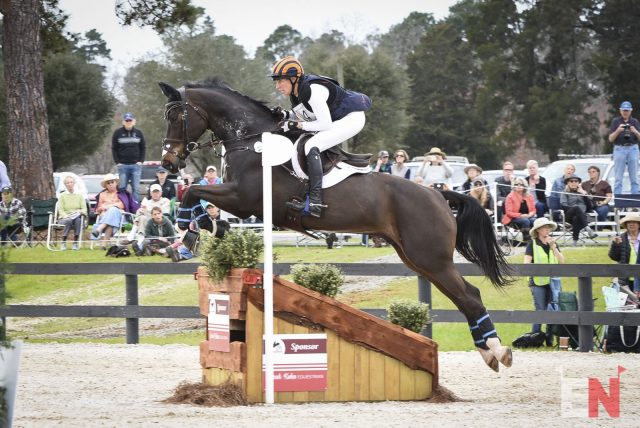 Wearing a smile from ear-to-ear, Liz Halliday-Sharp gave all the credit to Fernhill By Night for their win of the inaugural $50,000 LiftMaster Grand-Prix Eventing at Bruce’s Field.

“He hasn’t had a run this year but he knows his job and he just fought for me the whole way. I just couldn’t be more pleased with him,” she said of the 16-year-old Irish Sport Horse (Radolin x Argentina XII, by Argentinus) owned by Deborah Halliday.

With most of the course visible from the main arena, she heard the booming applause grow steadily louder with each fence — even when she narrowly missed her line to the penultimate effort, the Aiken Horse Park keyhole.

“We were flying, I was so focused I nearly blew past my line. I was like, ‘Whoa Liz, I’ll just angle it.’ But I was way up on time so I took a little pull there. The horse was class to just come in there and angle it for me. loved how he just operated off the turns for me, he can be a bit slow in his mind sometimes but today he was fully on it in every way,” she said. 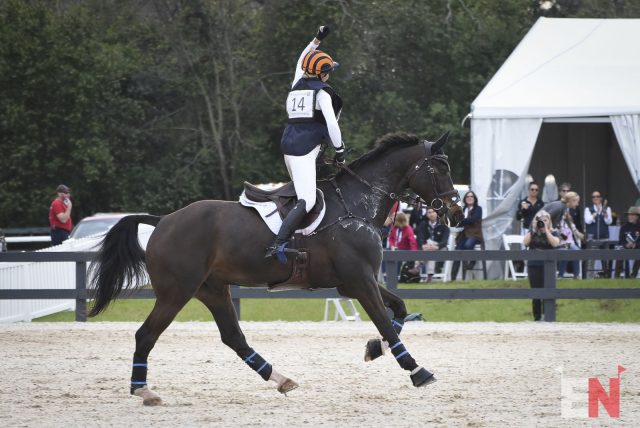 Though she jokingly calls him on old man, Liz thinks 16 will be “Blackie’s” year. “He loves it. He’s feeling great, and he deserve to win. He’s been a long time partner for me, and it took a long time to get him in a happy place. I think 16 is his magic year. Not a bad way to kick off the season,” she said.

Liz was riding for the Friends of The Animal Shelter (FOTAS), a nonprofit organization that aids the the Aiken County Animal Shelter. 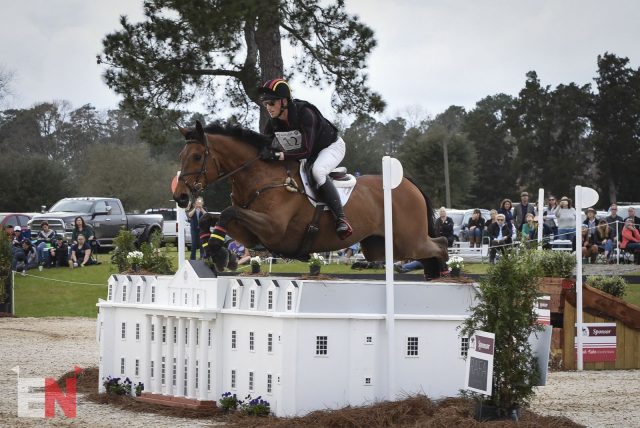 Doug Payne knew the twisty course would suit Vandiver, and he used that to his advantage. He and the 15-year-old Trakehner (Windfall x Visions of Grandeur, by Mystic Replica xx), who is owned in partnership between Doug, his wife, Jessica Payne, and Debi Crawley, stuck their heels in for second place on a score of 30.8.

“He’s just a kick ass horse,” Doug said of “Quinn” who cruised around the track like he was born for it.  “It think Mark [Phillips, Course Designer] did a very good job. It’s very spectator friendly and though walking it it seems pretty twisty and turny, it was actually pretty smooth and flowed well. It was very good for the horses.” 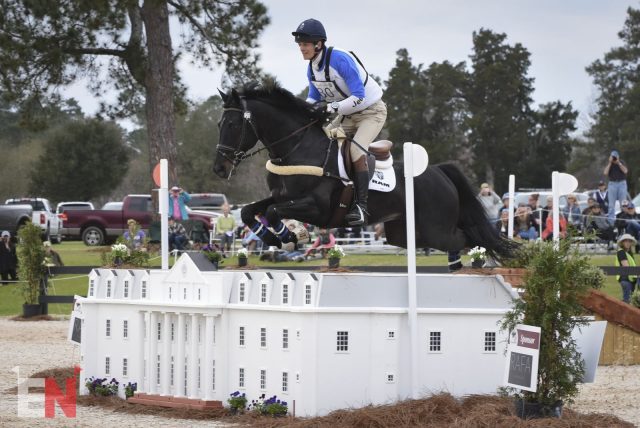 William Fox-Pitt piloted his catch ride, Sandro’s Star, handily into the top three, a bit shocked that he had the second fastest ride of the day. “I’m not the quickest rider so I was quite surprised that I ended up being quite quick,” he laughed. Hannah Salazar’s 11-year-old Oldenburg stallion (Sagnol x Poetic Patter xx, by Nostalgia’s Star xx) skipped around the showcase to finish on 31.1.

“I think the poor horse had to put up with quite a bit of shock with a different rider charging around all these fences,” William said. “It was a bit of a wake up call but he was lovely horse, and he did the job well.” 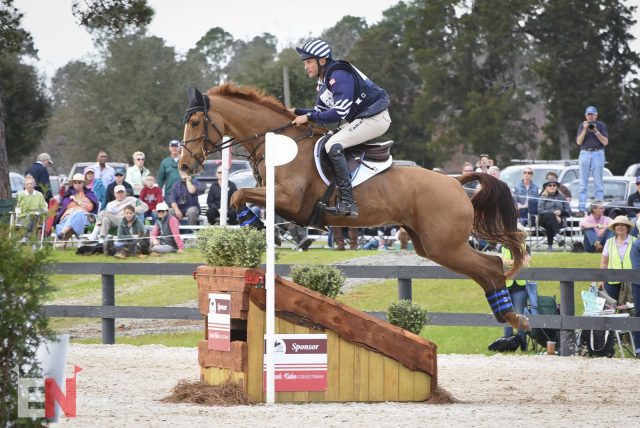 The tiebreak between Boyd Martin and Allie Knowles, who were both equal fifth, came down to just two seconds. Boyd ultimately bumped into fourth after getting closer to the optimum time with Kyra, a 12-year-old Canadian Warmblood (VDL Ulando H x Wellsley, by Welstern) owned by Christine Turner. Allie was then fifth aboard Sound Prospect, a 17-year-old Thoroughbred (Eastern Echo x Miner’s Girl, by Miner’s Mark) owned by the Sound Prospect Syndicate.

Felix Vogg and Jürgen Vogg’s Colero were sixth on 33 points. Jennie Brannigan piloted both her rides, Nina Gardner’s Cambalda and Ibella, to 7th and 10th. Will Coleman secured the fastest ride of the day with the Four Star Eventing Group’s Obos O’Reilly in 3 minutes and 50 seconds. They finish with a score of 34.4. Clayton Fredericks rode into 9th with Lily and Mary Beth Geelan’s Luksor.

The leaderboard changed shape this morning before the final phase even started as 15 pairs withdrew, most of whom where saving their horses for Red Hills, which is next weekend. In the group that remained, nearly all found the time achievable. All in the top 13 went double clear.

If you missed any of our coverage, you can catch up here, and replays of all three phases will be available at this link. 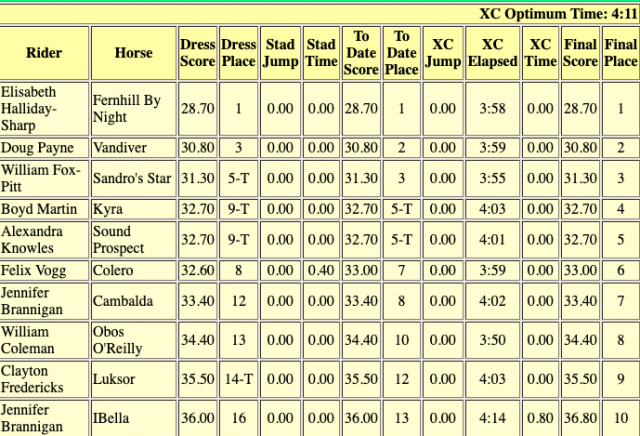