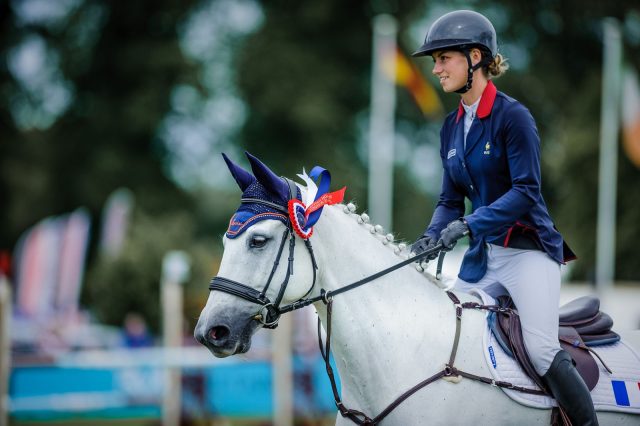 Though the CCI4*-L is arguably the feature class at the Bramham International Horse Trials, the under-25 edition is perhaps its most important: though classes for this age group exist in various iterations around the world, this is the only one at this level and intensity, and thus the only one that creates a really obvious pipeline to professional success.

Since the class’s inception in 1997, it’s been a prolific breeding ground for the next generation of superstars (and honestly, considering how good Bramham’s parties are, you can feel free to take that sentence however you like). Previous winners have included Tokyo individual silver and team gold medallists and 2019 Pau CCI5* winners Tom McEwen and Toledo De Kerser, victorious here in 2016; Rio Olympics individual silver and team gold medallists and 2015 Pau winners Astier Nicolas and Piaf de B’Neville, who took the title in 2012; 2005 European and 2006 World Champions Zara Tindall and Toytown, winners in 2002; and 2019 European bronze medallists and 2018 WEG team silver medallists Cathal Daniels and Rioghan Rua, who put their name on the trophy in 2019. Maybe the moral of the story is that you should head straight to Pau or a Senior championship squad promptly after winning here — and in the case of our 2022 champions, Heloïse Le Guern and Canakine du Sudre Z, either option feels like it might not be outside the realms of possibility.

24-year-old Heloïse was making her CCI4*-L debut this week, but you’d have been hard-pressed to spot any signs of inexperience or nerves in any of the three phases: she and the 12-year-old Zangersheide gelding, who she piloted in the Pratoni test event last month for a top twenty finish, began their week in fourth place on a 31.9, climbed to third after delivering the fastest round of the day in this class, and then secured the win with a stylish, energetic clear today that never left anyone in any doubt about whether the poles would stay in the cups.

But as much as Canakine is an out-and-out athlete, he’s also inexperienced with the buzz of a place like Bramham, which Heloïse had to manage carefully in the ring.

“He was a bit stressed out there, with all the people and the atmosphere, like he was on dressage day,” she says, “but he was amazing. I’m very, very happy — he jumped very well. He had a lot of energy after yesterday in the cross-country.” 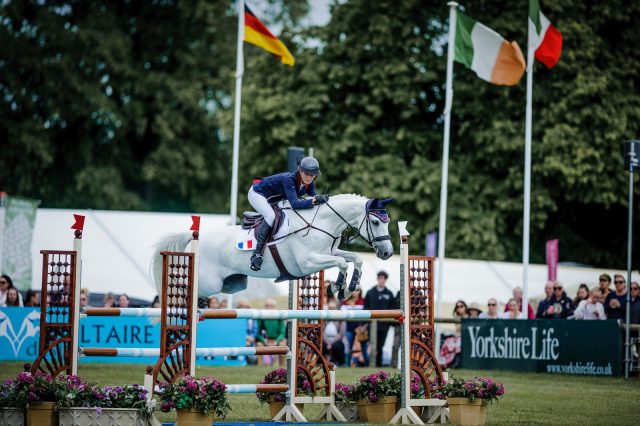 This is a first international win for the gelding, who was produced to two-star and competed at the 2017 Seven-Year-Old World Championships with French team stalwart Cedric Lyard, and just a second-ever career international victory for Heloïse, who has herself been a familiar face on the French young rider teams. She was part of the gold medal-winning team at the 2014 Pony Europeans, took team silver and individual sixth at the 2016 Junior Europeans, and earned herself another individual top twenty in the Junior Europeans the following year, too, before heading to the Young Rider Europeans in both 2018 and 2019. Though none of those events were in tandem with the impressive grey gelding she rode here this week, their partnership has been an exciting one since they came together in early 2019: in their eight FEI competitions together, they’ve never had a cross-country jumping penalty, and have finished in the top twenty seven times.

Their lightning-fast round yesterday, which saw them cross the finish thirteen seconds inside the time, was one of several very good rounds throughout the day, in which sixteen of the 21 starters completed and an impressive six came home clear and inside the time — the same as the much larger main CCI4*-L section. Ordinarily, we’d see just a smattering of clear rounds in this class, but fourteen of the sixteen finishers came home without jumping penalties despite a tough, influential morning in the senior section. 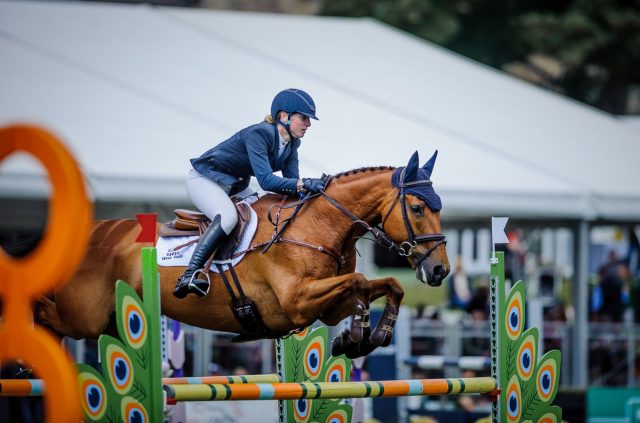 Greta Mason and Cooley For Sure secure second place — and the under-25 national title. Photo by Tilly Berendt.

Today’s showjumping, though, proved much more influential in this class, and just three of the sixteen starters would manage fault-free rounds. The first to do so was Greta Mason, who had been sitting fifth after jumping clear inside the time yesterday with the fifteen-year-old Cooley For Sure. That gave her the impetus to climb, and climb she did — she finished second in this prestigious class, earning herself the title of Under-25 National Champion in the process.

“He felt amazing — I couldn’t have asked him to come out any better after the cross country,” says Greta, who won the Opposition Buzz trophy and training bursary for coming home closest to the optimum time. “He’s been jogging everywhere this morning, and shaking — he’s been so excited! He finished really well yesterday, and I was obviously pleased to have a sound horse at the end of the day — but for him to come out and jump around like that, I couldn’t have asked anything more of him.”

24-year-old Greta, who rides full-time, has produced the gelding through the levels from a five-year-old, but their previous runs at this level have been more educational than competitive: they debuted in the Bicton replacement under-25 class last year, where they were eliminated, and then rerouted to Blenheim CCI4*-L in the autumn, picking up 20 penalties along the way. But Greta has worked hard with trainers Rodney Powell and Alex Franklin, with whom she’s based, to ensure that both she and her horse learned as much as possible from each experience.

“We’ve done a lot of work and I came hoping to be competitive, but there’s a lot of good riders here so I wasn’t sure how I’d fare — all I could do was hope that I did my best,” she says. “He has been known to have a pole, but he does try, so I was hoping he’d go clear — but equally, I wouldn’t have been surprised if we’d had a pole. But for him to jump such a good round was the icing on the cake, really. I get a lot of support with them, and it works really well. [Moving to Rodney’s] was probably one of the best decisions I’ve made, because it’s paid off clearly.” 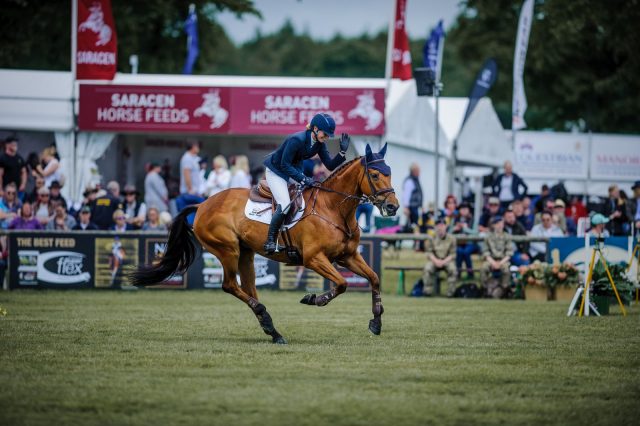 Greta Mason celebrates after her clear round inside the time — the first of the day. Photo by Tilly Berendt.

Their impressive round yesterday wasn’t just enormously competitive — it was also a milestone for Greta, who hadn’t previously made the time at the upper international levels.

“He’s an absolute machine — I feel like I could point him at anything and he tries his heart out,” she says. “It’s a big track out there; it’d be the biggest thing I’ve done on him. We did Blenheim last year and we did have a runout, but more because he didn’t quite see the way out — but if he sees the flags, he’ll do his best to get through them. He honestly has a heart of gold, and I don’t think I’ll ever sit on anything as bold cross-country ever. He goes around these tracks that are a big, big thing for me, and he makes it feel like a BE100. He skips around them — he’s the best horse I could be sitting on around this kind of course.” 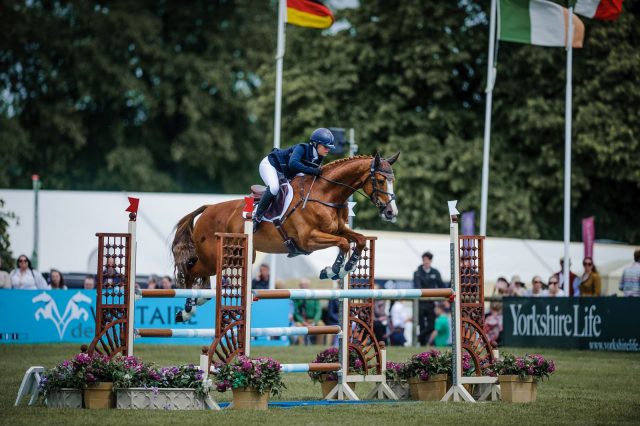 Heidi Coy ends the week with two in the top ten, taking a podium place with the exciting Halenza. Photo by Tilly Berendt.

Heidi Coy came to Bramham this week as one of the favourites to scoop with win with one of her two horses, but it wasn’t top pick Russal Z who ended up taking a podium spot: instead, it was ten-year-old Halenza, her second ride of the day yesterday, who produced the goods with one of the three clears inside the time today.

“Thank god it’s over,” laughs Heidi, who also finished ninth with Russal Z. “It’s quite nervewracking in that arena, but I was so chuffed with Russall Z this morning after her unlucky pin yesterday. Halenza, who I’ve had since she was a four-year-old was just absolutely amazing — you can’t ask for more than to finish on your dressage score, can you, really?”

Though Halenza performed excellently yesterday, Heidi’s round with her was far from straightforward. She started at the tail end of the class, at which point the starting times had already been pushed back by more than 90 minutes due to holds throughout the day — and midway through her round, she, too, found herself being pulled up after Ailsa Wates took a spill on course.

“Yesterday she was really good; she jumped through the first water and the gates, and then there was a massive stop sign. I thought, ‘oh god, why have we got to stop?’,” she remembers. “They said ‘there’s a bit of a hold’, so I got off her — and I think I was off her for about half an hour. Then, when they said to get back on, I thought, ‘oh no — all my adrenaline’s gone!’ It was quite hard, in cold blood, to get going again, and she was six-and-a-half minutes around so I think she sort of thought she was finished as well. So I had to pick us both back up, and luckily we had a nice oxer before the corner combination. Luckily, she then had a second wind and absolutely flew home — she jumped through all the combinations really well, and I couldn’t have been more chuffed with her.”

That, plus the mare’s young age and inexperience, meant that today’s round was going to be a fact-finding mission as much as anything for the mare, who picked up cross-country penalties in both her previous CCI4*-L starts.

“After a long day yesterday, you never quite know how they’re going to jump — but the atmosphere really lifted her and if you put a bit of pressure on her, she rises to the occasion. I couldn’t be more pleased with her,” says Heidi. 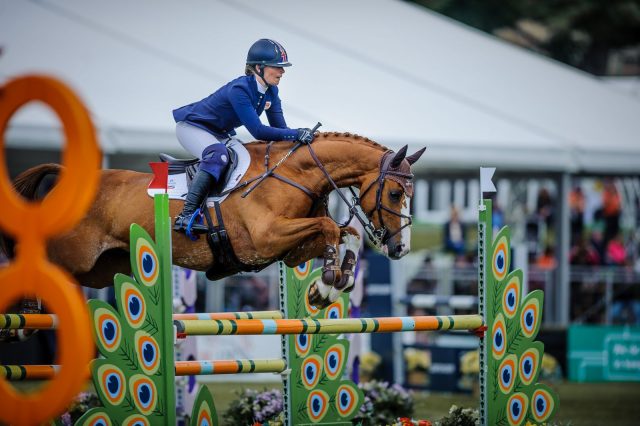 Cross-country leaders Phoebe Locke and Bellagio Declyange have an early rail to slip to a final fourth place. Photo by Tilly Berendt.

It wasn’t to be for overnight leaders Phoebe Locke and Bellagio Declyange, who jumped a stylish round that was marred by an early, expensive rail and 0.4 time, dropping them to final fourth place in this tightly-packed section.

“I think he just got a little bit flat to the rail; maybe I should have just taken a half halt and got him back,” says the 22-year-old. “He tapped number three, so I woke him up a bit, but my luck sort of ran out a bit then. Normally he’s a really good jumper, but I think the efforts of yesterday probably took it out of him a little bit. He was just jumping a bit flatter than normal — normally the showjumping is his strongest phase. But I’m still really happy with how he went yesterday, and he still jumped really nicely today.” 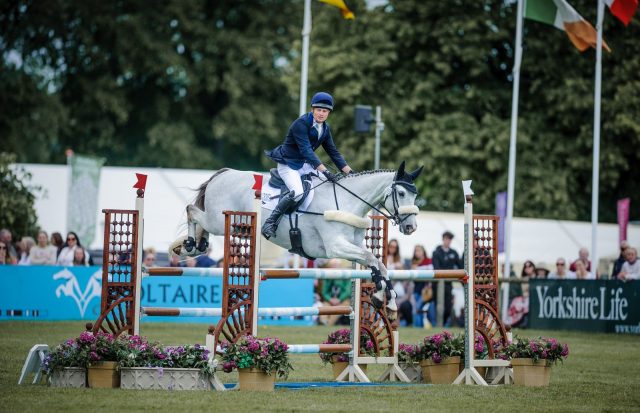 Fifth place was taken by first-phase leaders Alex Holman and Carrick Diamond Bard, who tipped two rails in this tough final phase, while twelfth-placed Charlotte Donald was awarded the Bruce Ogilvie Veterinary Trophy, which spans both CCI4*-L sections and is awarded to the caregiver of the horse who was deemed to be the ‘most devotedly looked after’ throughout the event.

The top ten at the culmination of the under-25 Bramham CCI4*-L.