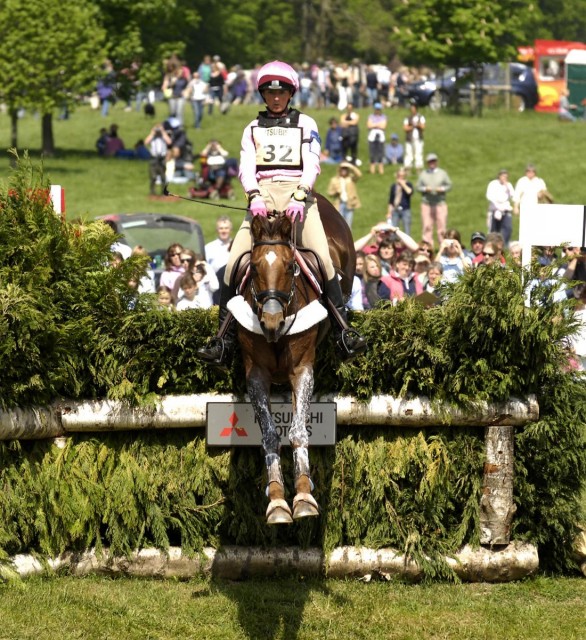 Lucinda Fredericks and Headley Britannia at Badminton in 2007. Photo used with permission from Kit Houghton.

Lucinda Fredericks just announced on her Facebook page that Headley Britannia was put to sleep today at 21 years of age. The details of her death are currently unclear. Brit — widely regarded as the top mare in the history of eventing — retired from the highest levels of the sport in 2012, capping a brilliant career with numerous victories at major events. The mare won Burghley in 2006, Badminton in 2007 and Rolex in 2009. Brit remains the only mare to have ever won all three events. She also helped win a team silver medal for Australia at the Beijing Olympics in 2008. The EN team expresses our condolences to Lucinda and all Brit’s connections.

Brit was the best horse I could have ever hoped to have ridden and I owe her so much. We were having so much fun today in the beautiful sunshine XC schooling, I was so pleased to be with her for her last moments, and to have a chance to thank her for everything she has done for me and everyone around her. She remained calm, steady and was peaceful at the end.

I am so thankful for the partnership I had with Brit, she was one in a million. She was small but had such a huge heart. She was a true professional and made my career what it is, and without her I wouldn’t be where I am. She was my best friend. She touched so many people’s lives and always brought a smile to everyone’s face”.

Brit’s competitive spirit, maneuverability, sheer guts and a will to win propelled her to the top of the equestrian sport of eventing. She is one of only two horses to have won all three of the top four-star events (Badminton, Burghley, and Kentucky Rolex), and the best ever eventing mare in history. Brit retired from top level competition in 2012 but enjoyed a win at Express Eventing in 2013.

Brit was sent to Lucinda to be sold in 2002, but no-one wanted a small chestnut mare whose ears could not be touched, and so she stayed to be competed. That year she won Blenheim.

After winning Badminton she went to stud for embryo transfer. In 2008, she won a team silver medal at the Beijing Olympics, and had two ET foals by Jaguar Mail; Britannia’s Mail, and Little Britannia both of whom will be continuing their mother’s legacy and are competing this weekend. In addition she has since had five other ET foals.