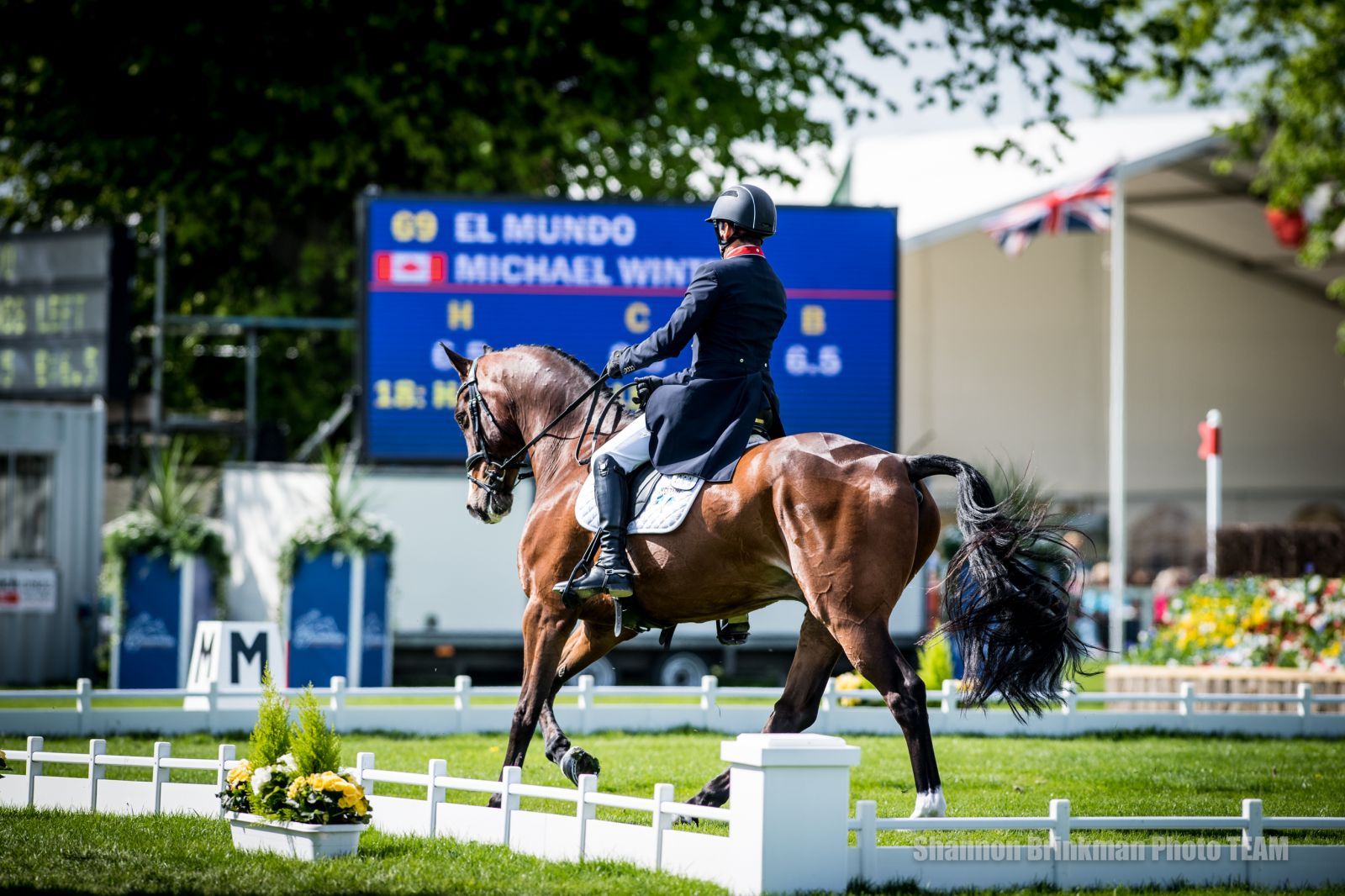 On his dressage test today: “That would be my worst score at the level so I don’t know. I thought it was an alright test. He was a bit shy at the end by the judges in the end of those shoulder-ins. I’m happy with him. I’m happy with myself, maybe not totally happy with the score.”

His thoughts on the cross country course: “I’ve walked it twice. It’s probably what I was hoping for, but that doesn’t make it any less calming on the nerves. It probably suits him. It’s quite big and bold and maybe I can take advantage of his big stride and his scope and use that to my advantage. That’s plan A and if that goes to plan and I have good ability to maneuver him at pace and stuff, I think it could be a lot of fun.”

“If I can keep him looking down the down the rein looking for his fences. He’s honest when he gets there, and he’s scopey across the widths of the fences. I think what [course designer Eric Winter] is doing a bit is where he has you come off a short turn and he then tempts you to take away, but then it’s always a scopey thing to get into the line on a scopey stride when you land. So I think he’s just daring us to be brave off the turn, isn’t he?…I mean, he’s a lot of fun to ride, and he loves his job. So just let him do his job, and hopefully give him the best guidance I can.” 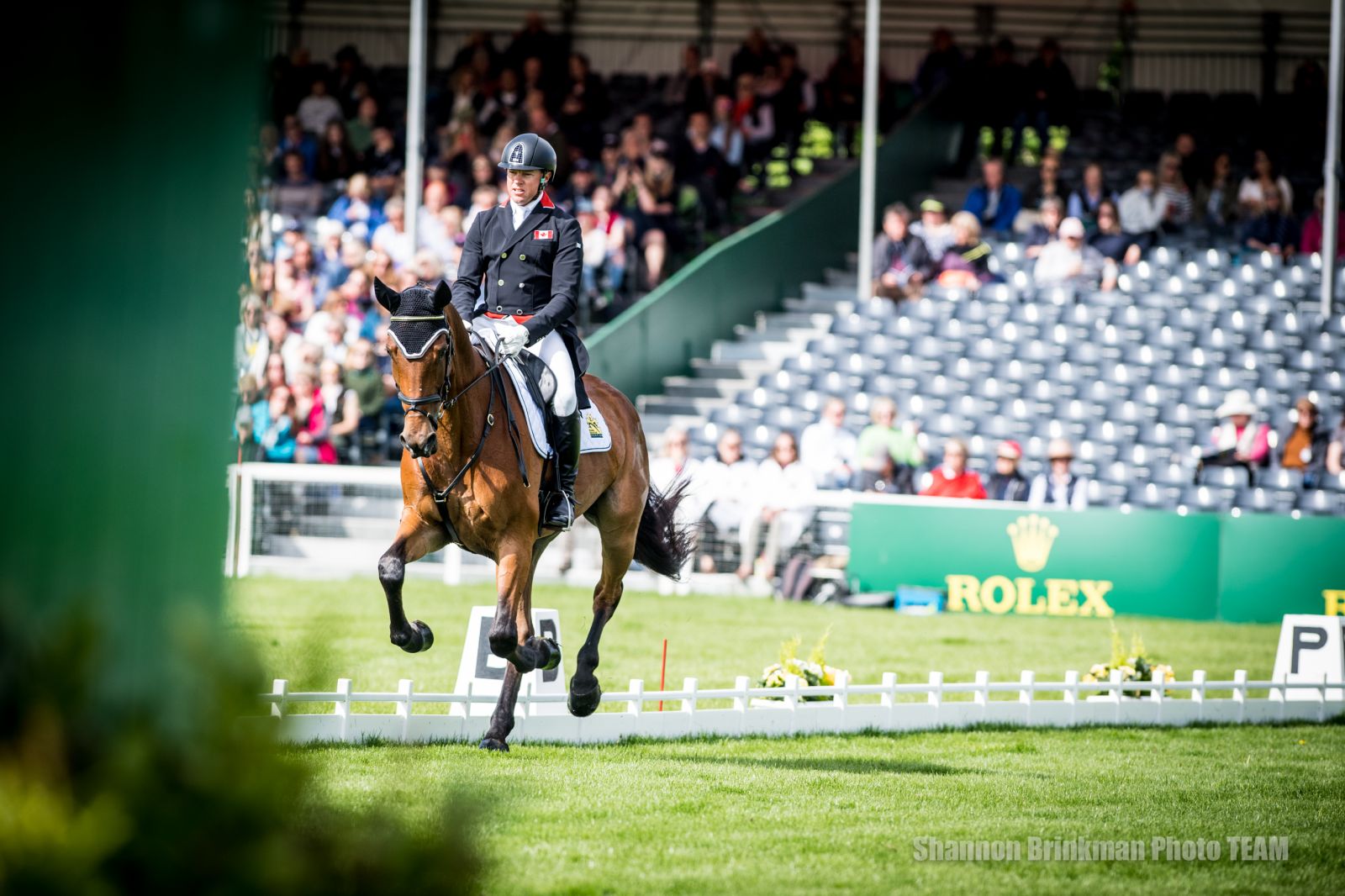 On his dressage test: “I was very happy with him. He felt energetic which is a hard thing for him — he’s usually a little on the lazy side, so I was thrilled. If anything, he got a little bit exuberant especially to the first change. Even in the half passes I thought ‘oh boy, he wants to change, he’s anticipating it’ which he doesn’t normally do. He’s usually relaxed and waiting for me, but no, I’m pleased. I was very happy.”

On the cross country course: “Looks great. I’m very excited about it. It looks all doable right now — we’ll see what it looks like when there’s a million people watching.”

On the decision to run Badminton as his spring 5*: “He is not a good galloper — he’s all about flatter ground. He loves the cold temperatures, so coming from Florida to here is perfect. I wanted that temperature change. And I trust him. How often would you have a horse that you can trust around jumps like this?” 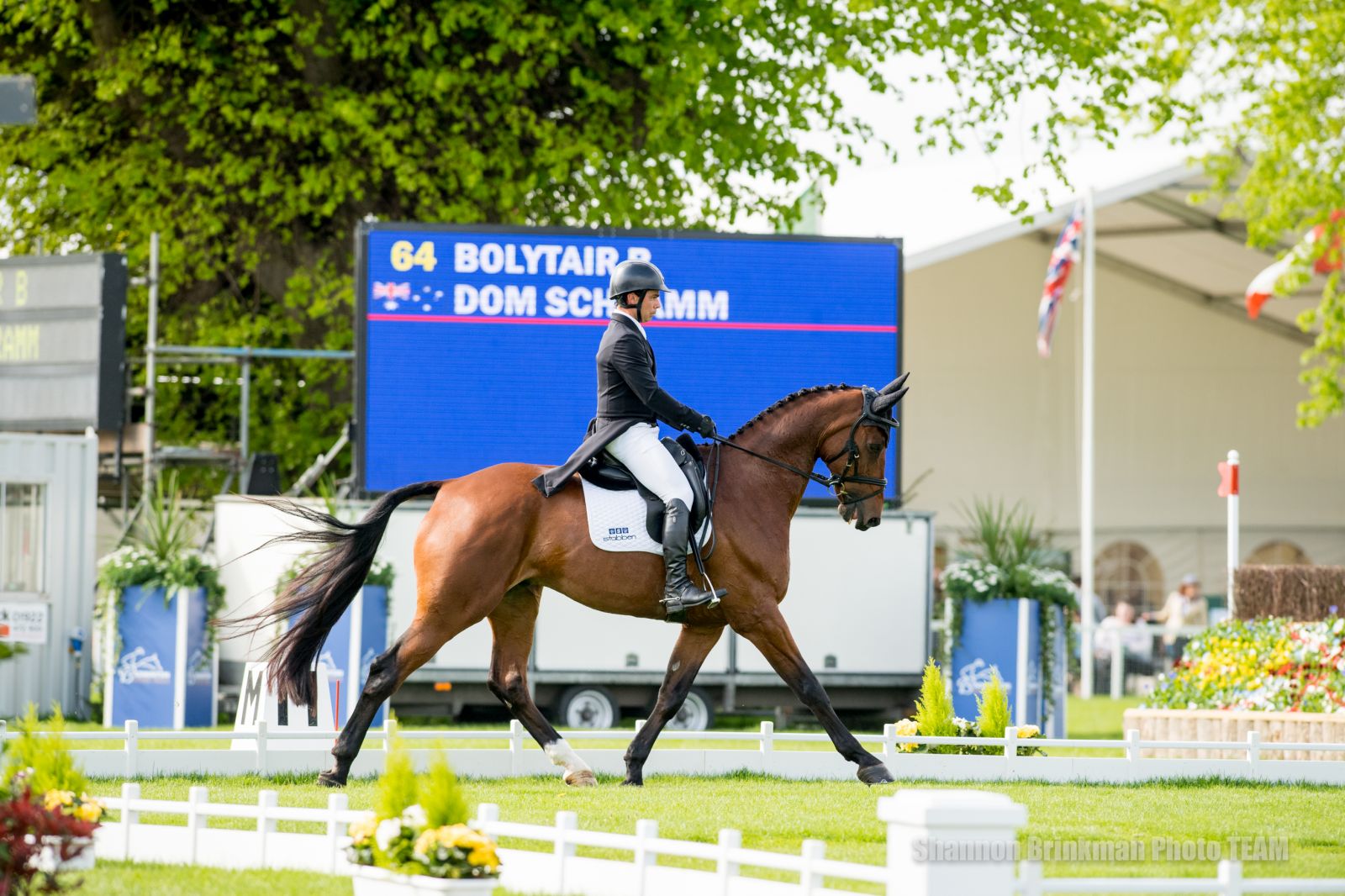 Dom Schramm and Bolytair B. Photo by Shannon Brinkman Photography.

On his dressage test: “He’s such a big, powerful horse, Bolytair B. I’ve actually been thrilled with him. I thought we were about to go and smoke it, but soon as I went around the short side, he started getting a hand taller. When he gets like that, I was just trying to keep riding him not just abandon him and so I’m actually not that disappointed in that — of course I wanted a lower score and I know he’s capable of it, but at the same time you’ve got to ride the same horse you’re sitting on in the ring…Of course, I was hoping to beat my personal best but honestly, it’s an electric ring, and I’m just thrilled to be here to you know — it’s such a special experience.”

On the cross country: “That’s what we come here for, right? And it’s a big, powerful strong horse and he’s a good cross country horse. I’m honestly actually really happy with the course for a couple of reasons. Main reason is that all the hard jumps I wanted to be on the course are there — I didn’t want to come to Badminton and not jump the Vicarage Vee! So I’m kind of pleased about that. And the other thing I like about it is I think Eric has made it really straightforward what he wants. It’s hard lines, they’re big jumps, but there’s no tricky business. There’s no wondering what number of strides you’re going to get, you know, or know half distances. So I think if you’ve got a big brave horse and you execute well, it’s there to be jumped. And we’re going to have great conditions, so I think it’s going to be awesome.”

On his fundraising efforts to get to Badminton: “So you know, unfortunately, this can’t happen — I can’t foot the bill myself. So there’s the option to do a GoFundMe, which I never really was about, because it’s kind of felt like I was asking for a handout. I wanted to find a way to be able to recognize the people that that supported me, so I came up with this big cooler and people were able to buy a patch or an embroidery spot on the cooler. I have this big, beautiful cooler he wears that’s got a lot of people’s names on it that supported us to get us here.” 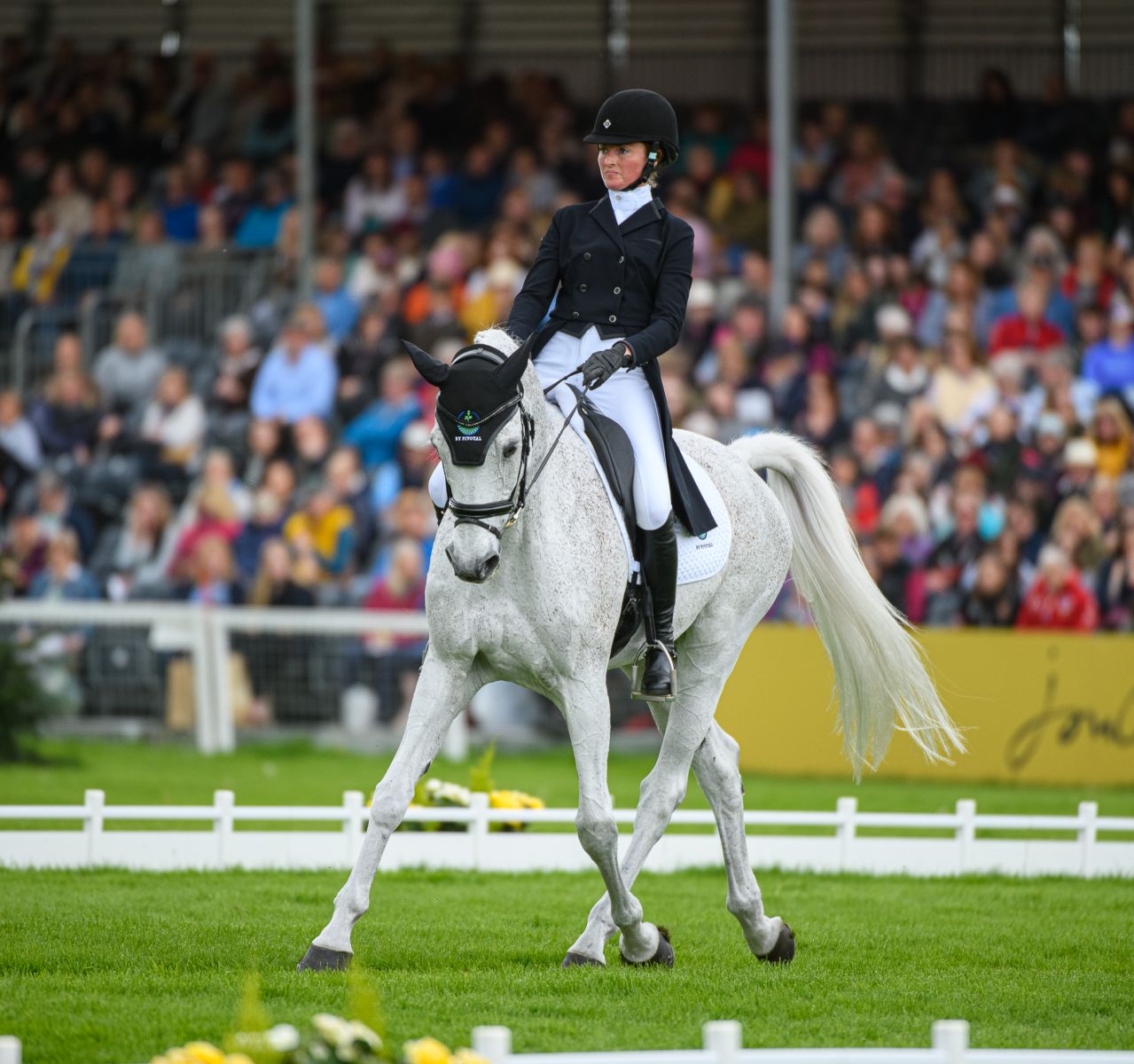 On her dressage test: “I was just excited to be in the ring and I tried to take it all in and also ride well. He was feeling pretty fresh, but overall I’m pretty happy and excited for tomorrow.”

On her trip to Badminton and how it compares to the other 5* events she’s done: “It’s a whole different thing — this is a completely different atmosphere and it’s so many spectators and it just feels like such a big deal. The American events too feel pretty big, but it’s just different. I don’t know how to explain it. It’s just different.

On tomorrow’s cross country: “He’s pretty bold and brave and everything seems jumpable, I just need to ride it well, and I think we’re going to have a good time.”

On her knee after having surgery four weeks ago: “It’s pretty good. I have tape on it right now. And I try to wear a brace and I’m not on.”

On fundraising to get here to Badminton: “I kind of made this plan like in the fall and I just decided that I had to figure out how to save money and make money to make this trip possible. So renting out my house, that was a big help — no mortgage for a year. And then I have a really good group of supporters and owners and friends, family that have done their little bits and every little bit adds up and that’s why I’m here.”