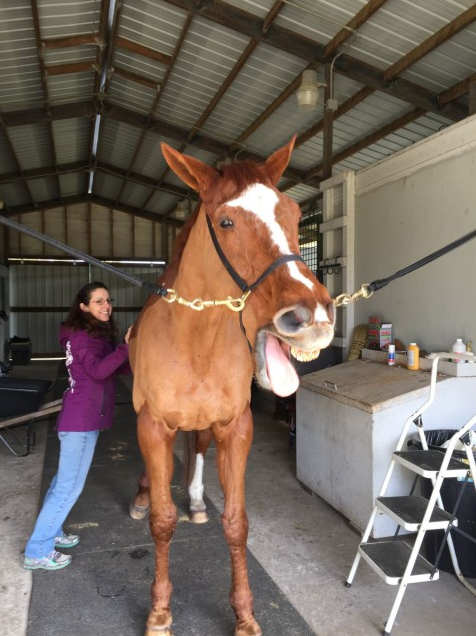 Charlotte Morris, creator of Phoenix Bodyworks, has always seen the world through the eyes of an athlete. A former triathlete, Charlotte found success before a herniated disc changed the course of her life. Now, she’s transferred her knowledge of the human body to those of her equine clients and she’s making a difference, one session at a time.

“When I was doing triathlon, I was racing hurt all the time,” Charlotte explained. “When I was diagnosed with a herniated disc, all the doctors did was give me medication. I eventually tried massage, and it changed my life. I decided to go into massage school, thinking I’d be there for three months — I ended up staying for a year and a half.”

Charlotte has always had horses in her life and knew she wanted to be able to work on horses using her newfound knowledge. A big hurdle she found early on was that there is no licensing in place for equine massage therapists, but there was a certification program that she went through.

“I started working on horses in 2006,” she said. “I had an old, broken down racehorse that went through a lot of soundness issues that probably could have been avoided with good bodywork. I named my business after him and it’s been my full-time job ever since.”

Without a licensing program, Charlotte took courses that she knew would transfer well to horses, such as sports rehab. She’s found that many techniques used on humans can often be too painful for horses, so she has adjusted them in order to make them work for horses while reducing the amount of pressure she has to use.

“A lot of bone problems are due to tight soft tissues,” she explained. “If you address the soft tissue problem to take the pressure off the joint, a lot of times you have a fully functional joint.” She gives an example of knee problems that have plagued her throughout her own life. “I had big quads. My quads were overpowering my knees, pulling my patella to the side. My bodywork therapist told me that if we released the quad and strengthened the hamstrings, it would help. In that case, it cured the whole problem.”

When Charlotte first works with a new client, she first requires veterinary permission to work on the horse, unless the client is at a competition. She then looks at the horse’s history, or at least what is available, to look for any previous accidents or injuries. 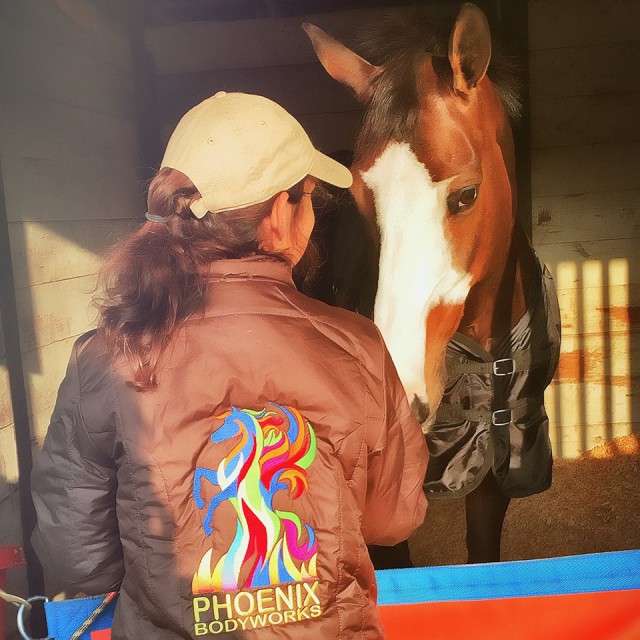 Charlotte hangs out with Wundermaske at Rolex. Photo via Charlotte on Facebook.

She will palpate the entire horse, listening objectively to the owner’s description of any problems. “I don’t chase the pain,” she explained. “Sometimes, what can appear to be one problem can actually be something different. A history definitely helps, but my hands are going to tell me the most.”

Indeed, there are many glaringly obvious differences between human and equine muscular structure. For example, a horse essentially uses every muscle in its body to perform one task. “You can have one small problem that turns into a huge problem because the horse requires almost every muscle to move. If there is one ‘problem area’, I will look at the entire body to try to pinpoint a specific area.”

Charlotte’s methods have proven successful, and she soon built herself a roster of clients such as Sharon White, Jon Holling, Dorothy Crowell, and several reining riders. This year, she traveled to Kentucky to work on horses at Rolex, both eventers and reiners.

Now, she spends most of her time on the road, working on client horses and teaching classes alongside veterinarians. She is also a saddle fitter, as she feels the two concepts go hand in hand. “I like to address the whole team, human and horse. You need to know about saddle fit — that’s a huge part of bodywork.”

When asked what type of symptoms may lead a horse owner to call her, Charlotte is quick to list many. “A lot of seemingly simply issues can indicate a need for bodywork. If the horse goes with its head tilted to one side, is heavier on one side that the other, or is displaying any out of the ordinary behavior such as refusing jumps or just having a bad attitude, that can be a sign of discomfort somewhere. Everything has an explanation.”

Charlotte is a firm believer that every horse should have bodywork from a professional. “There really needs to be some sort of licensing,” she said. “Some people will go to a short course on human massage and go directly to horses, and that does not always work out.”

She’s doing her part, though, hosting educational workshops in an effort to educate others on her profession. She’s involved with a clinic series called Arion, which is an equine biomechanics and bodywork certification course. She’s got big plans for the future of her profession and wants to ensure that horses all over the country are exposed to quality work.

At the end of the day, Charlotte has found her niche in the sport horse world — even finding time to compete herself sometimes! — despite the long days and weeks away from home. “You’re on the road all the time, and you go without eating a lot,” she said cheerfully. “But it’s very rewarding. I wouldn’t trade it for anything.”