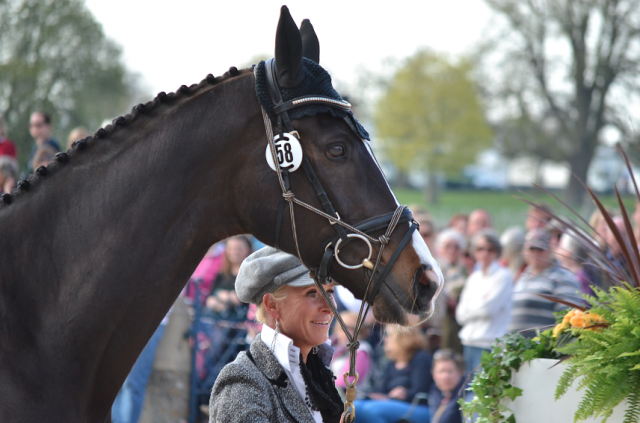 Bettina Hoy’s ride Lanfranco TSF will now change hands to former husband Andrew Hoy under the terms of their divorce agreement. Horse & Hound broke the story this morning, with Bettina and Andrew releasing different statements on the issue. Andrew said Bettina “has decided to return Lanfranco TSF,” according to Horse & Hound, while Bettina said she “has had to hand over the reins … as part of her divorce settlement,” as you’ll see in her statement below. This is certainly an interesting development, especially when you consider the horse has struggled with meltdowns in dressage with Bettina in the irons.

Bettina Hoy has had to hand over the reins of her 14-year-old Lanfranco TSF to her ex-husband, Andrew Hoy, as part of her divorce settlement. The combination finished in the top three at Blenheim and were 10th missing out on selection for London Olympics, and Bettina describes “Frankie” as her “soulmate.”

“He has not always been the easiest, as he has struggled with his nerves at the big occasions, but I have had some fabulous rides on him,” Bettina said. Lanfranco leaves Germany today to head for Andrew Hoy’s UK base. In what has been an emotional week for Bettina, she has also had to deal with her father being hospitalized with a stroke, which has left her plans for a spring season competing in the UK very much on hold. “My mother really needs me here,” she said, “and I would not feel comfortable being away from my parents at this difficult time.”

“Andrew has always been a rider whose talent I respected. I wish him and Frankie the best of luck together, and hope they can form a successful partnership,” said Bettina.