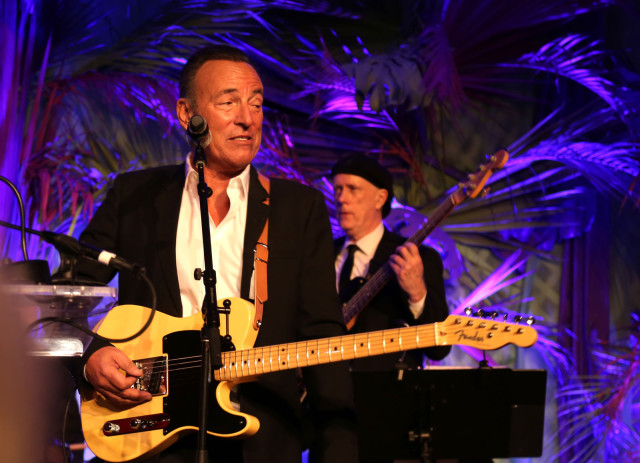 “It takes a village.” That’s a saying we use often in the horse world, and it’s one that’s especially applicable in the context of getting our athletes on the podium. From the vets and farriers to the grooms and family members who assist athletes in achieving their dreams, it takes a titanic amount of support just to participate in equestrian sports, much less compete on the Olympic stage.

Sending U.S. equestrians to the Olympics is made even more difficult by the fact that the federal government does not provide funding for our athletes. Instead, as the U.S. Olympic Committee explains it, “Team USA athletes rely on the generosity of the American people to achieve their dreams.”

That was the impetus behind the Rockin’ Rio benefit held this past weekend at beautiful Louisburg Farm in Wellington, Florida. More than 600 people attended the event, ultimately raising a record $1.5 million to help fund the enormous cost of sending our U.S. Olympic and Paralympic equestrian teams to the 2016 Olympic Games in Rio de Janeiro.

EN was lucky enough to attend the benefit to bring you a behind-the-scenes look at this very special night. With a jaw-dropping background of bright, festive colors designed to capture the Brazilian spirit of these next Olympic Games, let’s took a look at some unforgettable moments from Rockin’ Rio. 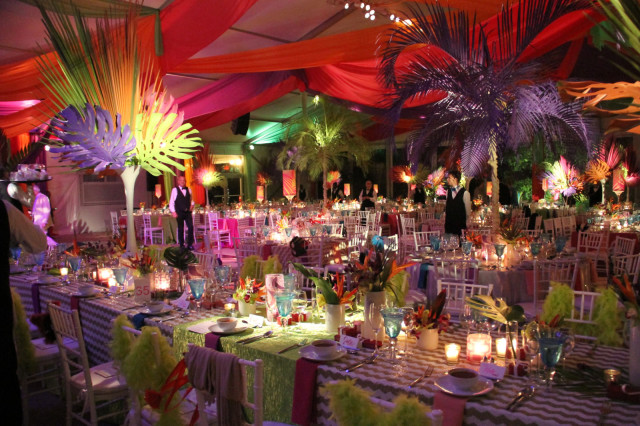 Can you say WOW? The tables were set to perfection at Rockin’ Rio. Photo by Rebecca Walton/Phelps Media Group.

A Live Performance from ‘The Boss’

When Bruce Springsteen and Patti Scialfa, parents of show jumping rider Jessica Springsteen, were announced as honorary chairs for the benefit last year, it generated plenty of excitement and raised one very obvious question: Would he perform? We all anxiously anticipated Bruce taking the stage, which he did right off the bat to welcome more than 600 guests to Rockin’ Rio.

“Patti and I have been involved with the horse world for 20 plus years since Jess started riding when she was 5 years old,” Bruce said. “Needless to say, retirement is nowhere in sight for me. I literally play for horse feed night after night.” (Even Rock and Roll Hall of Famers have to face #HorseWorldProblems.)

But Bruce didn’t play any songs then. Instead, we all enjoyed a delicious dinner, and then the live auction kicked off, with each item up for grabs somehow even more amazing than the one before it. (Scroll down for a full breakdown of what was auctioned at the event.)

Then it came time for the grand finale item to be auctioned off: a Fender guitar signed by Bruce Springsteen himself. Bruce brought the guitar up on stage and quickly upped the ante, throwing in 10 VIP tickets, sound check and backstage meet and greet passes to one of Springsteen and the E Street Band’s River Tour concerts.

And as if that didn’t already have the crowd whipped into a frenzy, then he plugged in the guitar and started to play a cover of Barrett Strong’s iconic song “Money (That’s What I Want).”  People started rushing the stage, and the impromptu performance turned into a mini concert.

Here’s a video I took on my phone, which includes the conclusion of the bidding for the guitar and concert package.

Bruce brought the house down, so it came as no surprise that two bidders really wanted to win. The hotly contested item was ultimately sold to two separate bidders at a final price of $300,000 each, raising a grand total of $600,000 in support of our U.S. Olympic teams.

Even now after having several days to digest the experience, I’m still in awe at the fact that we all were treated to a private, up-close-and-personal concert with The Boss himself. Seeing Bruce play live is an absolute must-do and something none of us will ever forget. (He’s currently touring now and just added four new dates.)

EN is in the house at #RockinRio, the USET Foundation fundraiser to send our U.S. Olympic equestrian teams to Rio!

A Live Auction With Everything You Could Ever Want

How exactly did the Rockin’ Rio benefit raise $1.5 million in total? Ticket prices certainly drew in a big chunk of that number, but a large amount of the proceeds also came from the live auction after dinner. As you’ve already seen based on Bruce’s surprise performance, this was not your typical live auction. Here’s a sampling of the items that were up for bid:

• A four-piece equine collection by artist Sharon Lynn Campbell, an internationally acclaimed artist well known for her like-like oil paintings of horses, animals and people. Sharon also donated a custom oil portrait that definitely emerged as a hot ticket item during the auction. (Click here to view a portrait gallery of her stunning work.)

• Tickets to the International Tennis Hall of Fame Enshrinement Ceremony and Championships with a stay at the Relais & Chateaux Castle Hill Inn (which looks like a totally amazing place to stay), plus the painting “Precision” by Andre Pater, donated by Misdee and James Miller

• A three-night trip for four to the Kentucky Derby and the Kentucky Oaks, complete with a Sky Terrace VIP Suite, tickets to the After Derby Party, luxe accommodations at the 21 C Museum Hotel in Lexington and a limo to drive you around town for the entire trip. Donated by the Duchossois family, Steve Wilson and Jeannie and Tom Tisbo, this trip definitely proved popular with bidders.

• A week-long stay at the Thistle House in the village of Edgartown at Martha’s Vineyard, generously donated by Mr. and Mrs. William H. Weeks. (Chinch won’t stop talking about making this his summer home.)

• A trip to California on a private jet with a stay at Montage Resort in Laguna Beach, AND an 11.63 carat yellow sapphire in the ring setting of the winner’s choice, donated by Moti Ferder and Lugano Diamonds.

• And, as already discussed above, the Fender guitar signed by Bruce Springsteen with 10 VIP tickets, sound check and backstage meet and greet passes to one of Springsteen and the E Street Band’s River Tour concerts. Holy live auction! 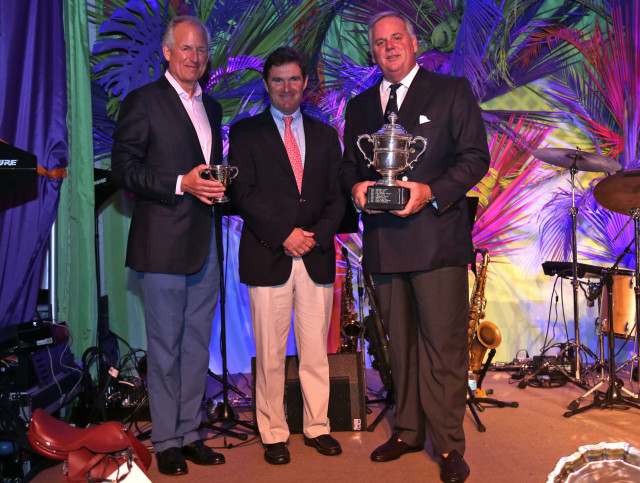 A night like this was always going to be a pretty spectacular one, but it was made all the more special by Phillip Dutton receiving the 2016 Whitney Stone Cup. First awarded to Michael Matz in 1980, the Whitney Stone Cup is given annually to “an active competitor who displays consistent excellence in international competition and high standards of sportsmanlike conduct while serving as an ambassador for the United States and equestrian sport.”

Phillip’s owners and supporters Annie Jones, Caroline Moran, Tom Tierney and Jacqueline Mars were also there to congratulate him, as was his wife, Evie, who he gave a special shout out to during his acceptance speech, which elicited huge cheers from the crowd. If you missed EN’s post about the award with quotes from Phillip, click here to read more.

Show jumping rider Lucy Deslauriers also received the Lionel Guerrand-Hermès Trophy, which is presented to a young rider in one of the Olympic disciplines who exemplifies both sportsmanship and horsemanship. Five eventers have received this award since it was established in 1983: Bruce Davidson Jr. (1998), Marilyn Little (2001), Clark Montgomery (2002), Will Faudree (2003), Kristin Schmolze (2004) and Tiana Coudray (2011).

Brownlee O. Currey Jr., chairman of the board for the USEF Foundation, received the R. Bruce Duchossois Distinguished Trustee Award, which was created last year in recognition of Bruce’s leadership, generosity and outstanding character. Bruce was a stalwart supporter of eventing before losing his battle with cancer in 2014, and it’s wonderful to see his memory and legacy preserved through this award. 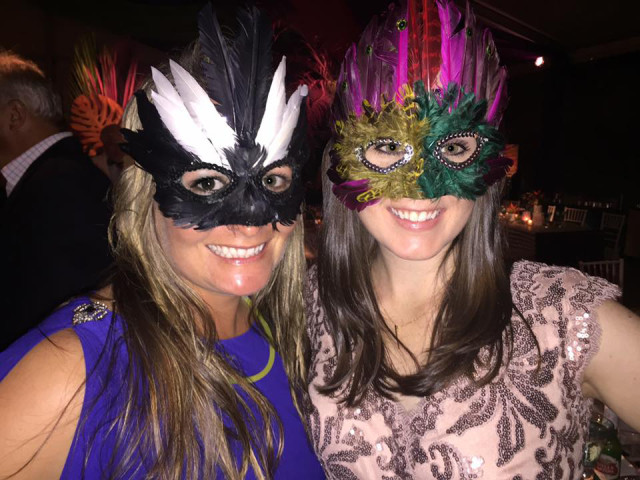 Rocking Out for Rio

In looking back on the wildly successful event, I’m struck by the the dedication and commitment to our sport demonstrated not only by all the people who attended Rockin’ Rio, but also from the people who worked incredibly hard to make the benefit happen.

A huge thanks has to go to the Benefit Committee chairmen for planning the event. Click here to view the full list of chairmen, as well as all of the individuals who served on the Benefit Committee. Jacqueline Mars chaired the Eventing Committee, with Gloria Callen serving as vice chair, and both of these wonderful supporters of eventing also deserve a huge shout out.

It was also fantastic having so many eventers and supporters of the sport in attendance at the benefit. The eventing crowd filled three full tables and had a fantastic time. (And, naturally, Plantation Field’s own Katie Walker was the only one at the event who managed to take a selfie with Bruce.)

Thank you to Bonnie Jenkins and the USET Foundation for allowing EN to be a part of such an unforgettable night. Scroll down for a full photo gallery of some of the attendees. With a record $1.5 million raised at the benefit, our U.S. Olympic and Paralympic equestrian teams are one giant step closer on the road to Rio. Go Eventing. 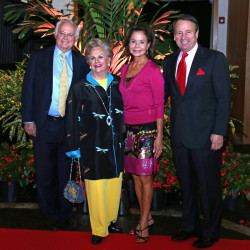 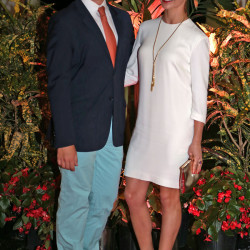 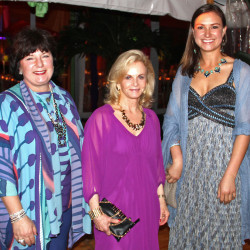 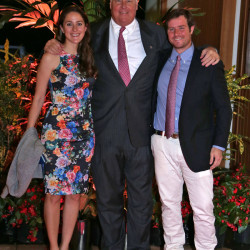 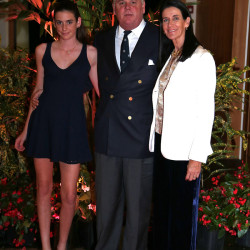 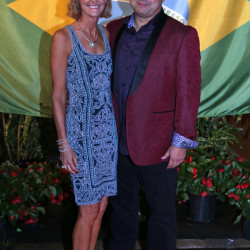 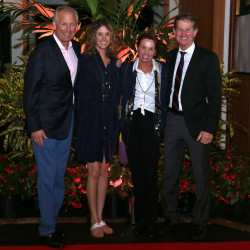 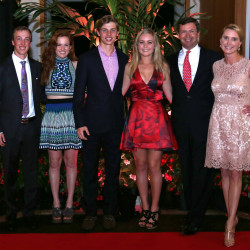 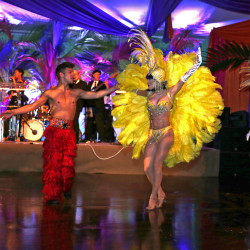 Of course there were dancers! Photo by Rebecca Walton/Phelps Media Group.