Long time no see. Well, long time no blog I guess. Two weeks turned into three, and before I knew it it had been over eight weeks since my first post. I am not going to lie … The past two months have been a bit of a struggle. I had a really hard time being motivated to write about just how much I was struggling with how I was feeling about my riding and goals.

When I first signed up for the Makeover I honestly didn’t think that the Makeover veteran saying of “stay in your lane” would end up being my own motto. All of the more seasoned Makeover trainers kept commenting those four simple words on post after post of people asking what everyone has done so far or when someone was panicking that they didn’t have their horse yet.

I didn’t imagine that being in a group of other Makeover “trainers” I would get sucked into comparing my journey to others. I felt secure. I had my horse before I applied. He was perfectly healthy and sound. This wouldn’t be my first time restarting a horse or introducing it to a new job. I even felt pretty confident in my ability to bring along another OTTB with the help of my trainer. 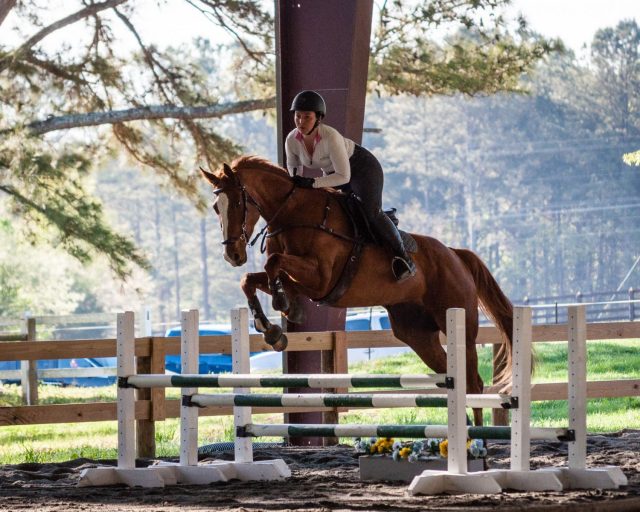 Littleorphanannex was truly something else. Photo by Eric Nalbone.

Mid-March things kind of started to stall though. It felt like for every step forward I had two steps back. It was honestly hard to stay motivated to ride and push myself and I knew I needed help to get me over the bump in the road. My horse ended up going to my trainer’s for a few rides and what I now call the “giraffe exorcism” was a success! I still felt a bit discouraged though.

Day by day I kept seeing everyone making huge leaps “ahead of us.” It was, and still is, so easy to focus on what other people are doing and what we haven’t accomplished yet. I found myself not only comparing my progress to others but also my honest young horse to my super bold late Thoroughbred mare. It is unfair to compare one horse to another anyways, but it is totally unfair when literally everything in my life is different this time around.

It is only natural that the green horse journey would be harder for me both emotionally and physically now as a new mom. I spent weeks feeling inadequate and second guessing myself. Who was I to get a big young athletic horse off the track as a new mom? Did I really want to be bringing along another green horse at this point in my life? How could I have believed I could be successful in doing this? 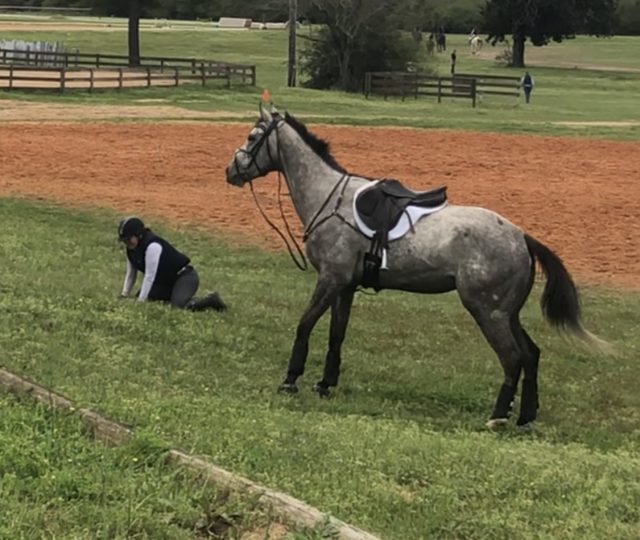 Not feeling very qualified in this moment — no one was hurt. Photo by Amanda Chance.

When I was doubting myself and struggling to get to the barn I started to really ask myself what I was doing. In that self reflection, or to be honest self doubt, I realized just how much I do really want this. It would have been a lot easier to just throw in the towel. Yes, I am lucky but it’s not all luck. I have to want it so much more now. I have to try so much harder. Things might be bumpy along the way but the highs are so much higher now and every small success means that much more.

If you focus on the struggle, in summary, the past two months have brought a mild shipping fever, four flat tires – pulled shoes, a rider fall, and a rained out show. Despite all of that I have made more progress with Whiskey Wu (Flatter x Stay Here – Dehere), or Dobby as I call him, than I could have hoped for. We have gone from jumping the occasional cross rail to now jumping courses. Dobby hauls like a champ and takes new places in stride even if he is sure every one of them is the weirdest track he has ever been to. He has a great brain and is proving to be very amateur friendly. This baby horse is a different ride than what I have been used to the past 4+ years but is making me a better rider one day at a time. 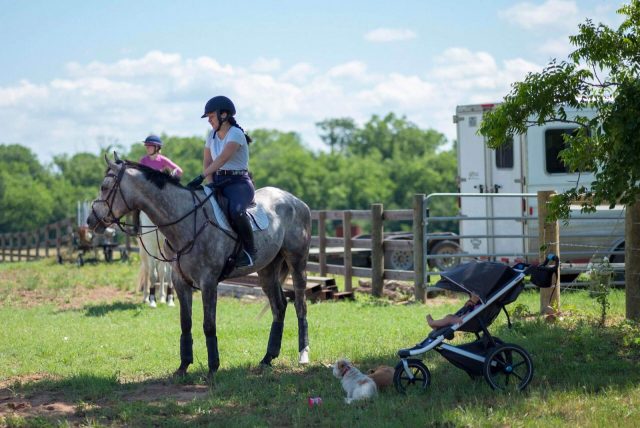 I know in my heart that I want to continue to be a better rider just as much if not more than I did before having my daughter. My goals might be smaller that they were before, even insignificant to some, but they mean exponentially more to me now and that is all that matters. At the end of the day I have to want it and if the past few months have taught me anything it is that I really do want this. All of it. Even the blood, sweat, and tears. It doesn’t matter what other people are or aren’t doing as long as I am doing everything I can to be the best that I can be. 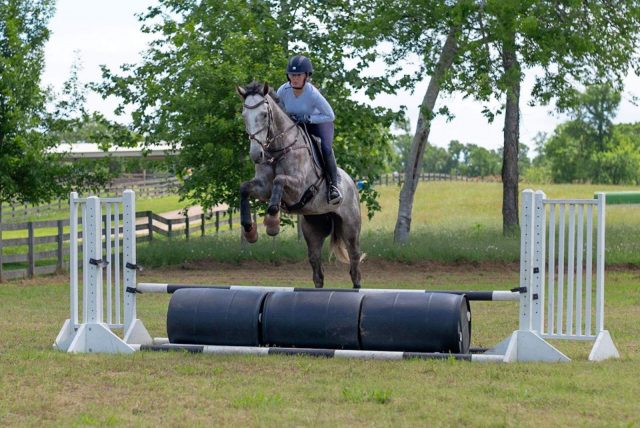 We keep going for moments like this. Photo by Dusty Brown.

My answer to anyone else who is also asking “How did I think I could do this?” would be simple. It is 100% the people. My family and friends who support me through all the ups and downs and are the real stars in my story. I don’t have enough thank you’s for the incredible people in my life that make this dream of mine possible every day. From my husband, my trainer, and barn buddy to all of the baby wranglers in between, it truly takes a village. I would never have considered getting another horse off the track without each and every one of those people and I certainly wouldn’t have set sights on the Makeover.

I definitely didn’t see myself in this position six months ago, but one sweet gangly baby Thoroughbred later here I am doing the thing and loving every single, sometimes frustrating, minute of it.