Have you ever played a game of “chicken?” Hopefully not … but maybe you have seen this madness in a movie, wherein two drivers in 1950s cars drive as fast as they can towards each other, head on, and whoever jerks the wheel and chickens out first is the “loser” (kids, don’t try this at home).

The game is incredibly stupid. As a hyperactive 10 year old I hate to admit this, but I played this game with my sister on our 10 speed bicycles. One of us pedaled as fast as she could UP the hill towards our driveway, and the other pedaled as fast as she could DOWN the hill, to see who could get to the driveway first! I think we both actually lost the game that day, although I did chicken out first and jerked the handlebars to avoid crashing into my older sister April, only to smash face first into a row of mailboxes.

But what does this have to do with riding? And why is winning a game of chicken imperative to successful jumping? 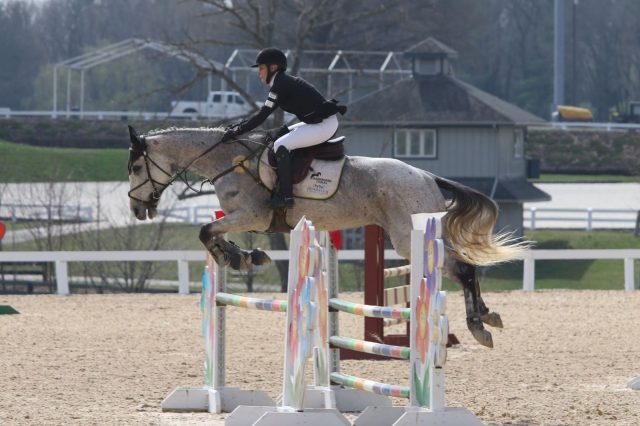 At a recent horse trial with my enthusiastic grey OTTB River, I had an epiphany. The last three strides before any fence is just like this game of chicken. You are playing the game with your horse! If you chicken out first by creeping forward with your shoulders, or throwing yourself in a two-point before the jump: you lose! This creeping allows the horse to suck back, stop, or run out right or left. It could also cause them to go long and flat, and simply have a poor jump effort, which leads to knocked rails. If you keep your shoulders back and the horse in front of your leg, ride all to the way to the base up the jump, wait for him to start to leave the ground and then you two point, you won that game of chicken! 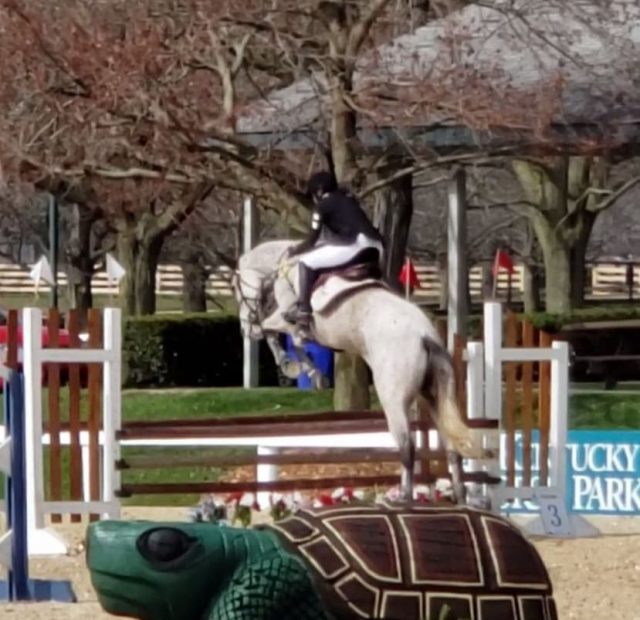 It is so much easier to tell if they are sucking back when you sit back. It is so much easier to avoid a run out if you block the exits to the right and left by sitting up and maintaining rein contact. I will forever call the final three strides before a fence: “the chicken strides.” (Perhaps I should trademark this?)

This magical realization came as a combination of years’ worth of lessons and experience, from Chrissy Hall of Texas showing me how to get deeper to an cross country fence on my spooky horse at the time, Dom Schramm putting my horse River in “trot fence bootcamp,” and Buck Davidson making me sit an entire jump course. And the final moment where it all made sense was at this particular show, after a horrific dressage round, where I went into stadium with a renewed gumption to take on my horse and not back down. 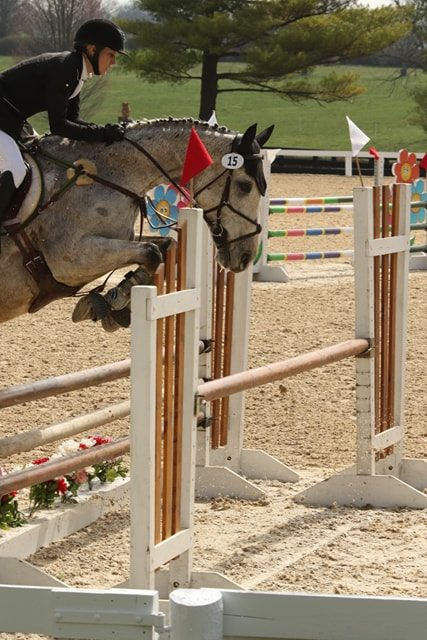 The last three strides before a fence always go as follows:

Me: “I will not. You have to have contact, and I have to sit back. You’re athletic. You can do this.”

(2…)River: “Then I will just canter in place and throw my head up in the air. I hate you. This is hard. I want to steeplechase.”

Me: “We aren’t steeplechasers. We are eventers. I’m NOT giving in. Jump or crash!”

Me: “I’m not giving in! Jump or crash!!! I’ll ride you THROUGH this fence. JUMP. OR CRASH.

(base of fence) River: jumps beautifully with the best bascule and roundness he has ever had in his life.

(in air) Me: thinking, or possible cursing in front of this nice audience, I can’t be sure, Holy $#@!

We obviously need to get this worked out before our next show, but the lightbulb moment was worth the entry fees. Next time you jump a fence, ask yourself: who won that game of chicken? Did I win (I kept connection, shoulders back, leg on, until the base?) Did my horse win (I crept forward with my shoulders, took my leg off on 3 … 2 … 1 … strides, and allowed a run out or poor jumping effort)?

This is IMPERATIVE cross country. Ride every jump with the mindset of “over it or through it.” “Jump or crash.” Because I’m betting your horse would much rather choose jump. And if they do pick the wrong one, they will learn from this. Ride your “chicken strides.” Win the game. 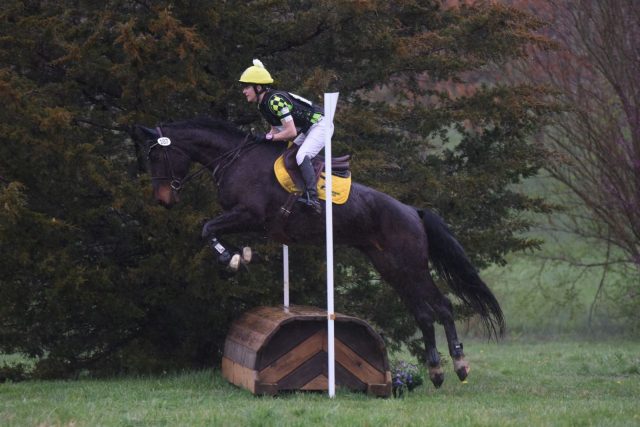 A recommended exercise for this would be a start with a simple pole on the ground. Start at the trot, sit your chicken strides … then two-point only over the pole. Slowly build this up to a crossrail at the trot, then a low Swedish oxer, then an oxer. Sitting the trot during your chicken strides makes it obvious if you won. Did you are horse just trot really big or did they actually jump? Did you give up at the last stride and throw yourself into a two-point?

You can then work your way up to cantering a low oxer. Eventually build it up to a course. To play the game of chicken, my students had to shout out after every jump who won that game  — was it them or the horse? This made them very self aware of what their shoulders were doing, and if their position was correct.

The greatest joy in this exercise is to go around a course and shout out “I won! I won!” after every jump. Ride the chicken strides. I may not win a show just yet, but dang it, I’ll win those chicken strides. It really starts to make you feel great by the end.

Why is this so important? It’s vital to win the chicken strides because in cross country, or even stadium, you’re less likely to have a run out or a stop. Riding this way helps eliminate your horse’s poor jumping effort, such as long and flat jumps, which will drop rails. If you win the “chicken strides,” your horse will more likely get to the base and go up-and-over, with a beautiful bascule.

Play chicken with your horse. And win. 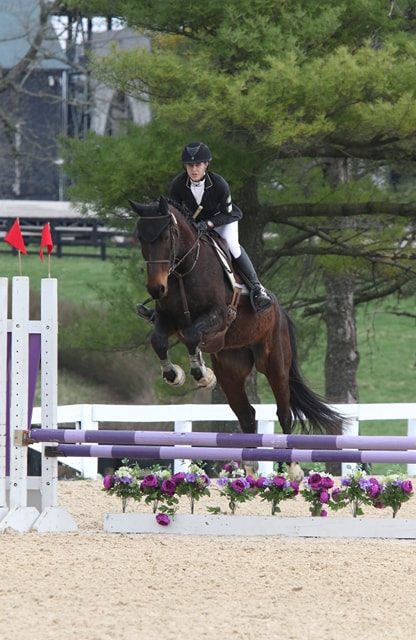