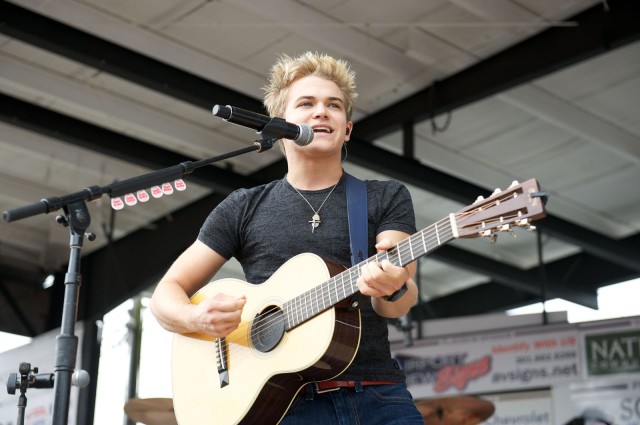 When Rolex announced that a kid named Hunter Hayes would be performing in concert on Saturday, April 30 following cross country, I was underwhelmed. The name sounded familiar but I couldn’t quite place it. Had he won American Idol? Was he dating Selena Gomez?

Then I remembered: McKenna Oxenden, a junior eventer who wrote a column for Horse Nation called “The Secret Life of McKenna” before the time crunch of juggling college with riding swept her away, was a superfan. I knew this because she constantly referenced him in her columns, which were supposed to be about horses.

The zenith of her fangirldom came in 2012, when she waited in line for four (FOUR) hours to procure second row tickets to a show. “The wait was also worth it when a mom fight broke out,” she wrote, blatantly ignoring her editor’s directive to stay on topic.

But the performance was a seminal moment in her life, apparently, and she just couldn’t hold it in. “He puts on a really great concert,” she wrote in her column. “He makes eye contact with you to make you feel special.”

I’ve always tried to give McKenna constructive feedback on her writing, which is probably the main reason why she is now an award-winning sophomore journalism major and school paper editor at Marquette University in Milwaukee, Wisconsin.

Never forget who made you, McKenna. 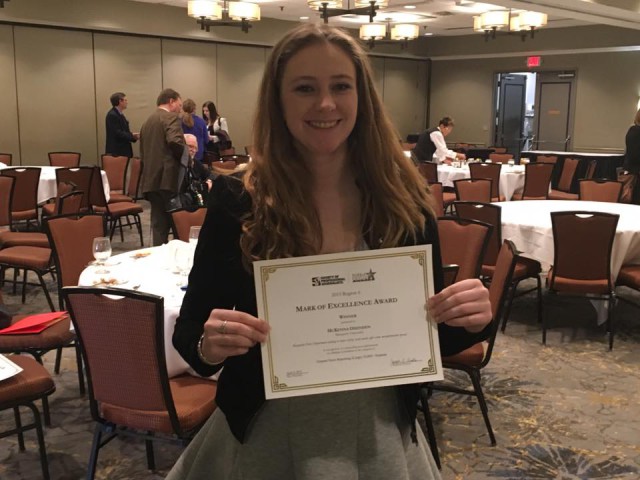 Earlier this month McKenna won a Society of Professional Journalists award for the category of General Assignment News. Photo courtesy of McKenna Oxenden.

Anyway, one of the journalism concepts I tried to impress upon her as an HN writer was the judicious use of exclamation points and emphatic capitalization. But I had to pick my battles, and in the case of her Hunter Hayes concert report (to her credit she did segue into something horse-related eventually), I let her have her way.

“The icing on the cake was MEETING and getting his AUTOGRAPH!!!!!!!” McKenna wrote. “Also I got pictures with the other band members, Sam Ellis, who is my home boy, the bassist who we nicknamed ‘Dreads’ but is really named Matt, and Steve the drummer.” 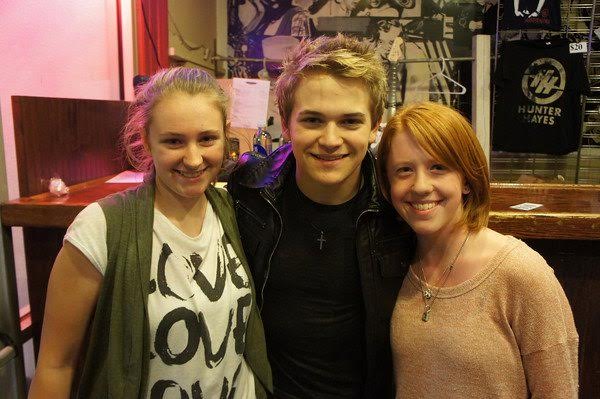 McKenna’s obsession with Hunter has only escalated in the years since. 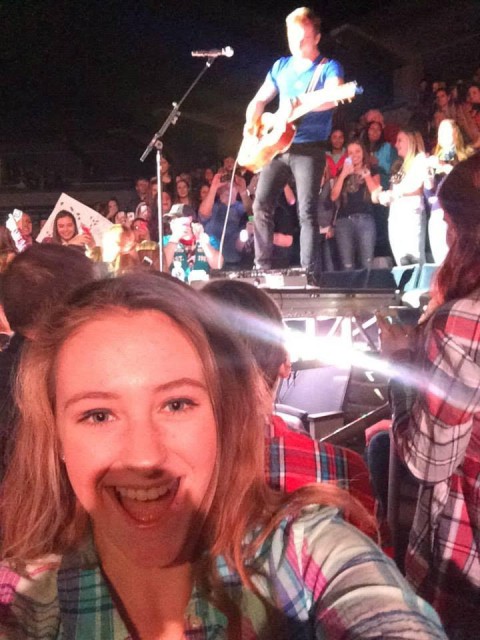 Selfie at a 2014 concert in Milwaukee, Wisconsin where he opened for Dan + Shay, another band I have never heard of. Photo courtesy of McKenna Oxenden.

Now, at ripe old age of 19, McKenna’s two life passions — eventing and Hunter Hayes — are set to collide at the 2016 Rolex Kentucky Three-Day Event. If you want to find McKenna on Saturday night, you know where to find her.

And when I needed the 411 on Hunter’s upcoming show, I knew just who to call (er, Facebook message — kids these days never pick up the phone). This was our conversation.

Leslie: So, McKenna, this Hunter Hayes guy. He’s a singer? Enlighten me. No rush or anything — just respond when you have a minute.

McKenna: He’s not just a singer, Wylie. He is a beautiful man, a gift from God and a flawless human being with the most amazing singing gift. He has a song for every occasion. Broke up with a significant other? He’s got one for you. Need a great drinking song? Don’t you worry. What about a song to profess your love? He’s an expert. Oh! And a song to cry to because I’m marrying him and you’re not? Yeah, he can make that happen, too.

Leslie: I hear what you’re saying. Songs about love, heartache, drinking … that stuff has been the bread and butter of great country singers — Hank, Johnny, Merle, Waylon — for decades.

The difference is, Hunter Hayes looks like he’s all of about 17 years old. MAYBE 18. (Note from Jenni: Hunter Hayes is 24.) Definitely not old enough to get married or order a beer. (You’re not old enough to do those things either, McKenna, so don’t be getting any fresh ideas.) Which is to say, as far as fountains of wisdom are concerned, I’m not sure how much life advice we should be taking from this kid.

McKenna: Now Wylie, he might look like a youngin’ but this country stud is wise beyond his years. The guy has been on a country music stage performing pretty much since he could walk. AND he played all of the instruments on his first album… now that’s talent and also admirable!

Leslie: Precocious, talented, yada yada yada. Let’s circle back to the part when you called him a “country stud.” I dunno… to me he kind of looks like a cross between Justin Bieber and Joffrey from Game of Thrones. Explain to me the appeal.

McKenna: I think the Game of Thrones reference might be a bit out there … but he’s just so cute! He’s got the baby face going for him and the blonde hair. Another big seller is the personality — extremely personable and humble! He’s like a cute little nugget.

Leslie: I assume you’ve seen the video where Tim Price, Jennie Brannigan, Buck Davidson, Boyd Martin, Hannah Sue Burnett, Lynn Symansky, and Sinead Halpin are “getting crazy” for Hunter Hayes. Do you think they actually already knew the words to the song?

McKenna: I’m pretty positive they all knew the words. They can deny it all they want but deep down they know they want crazy and love the little nugget. And Sinead, Hannah and Lynn definitely fangirl for him.

McKenna: Gotta keep an open mind, expand your horizons and give the little nug a chance! And don’t forget that on his very first album, he played every single instrument you hear in it and that’s pretty neat if you ask me.

Thanks for enlightening us, McKenna.

Tickets are $35 for general admission, and a Taylor Harris Insurance Services VIP Access Package is available for $150, which includes a VIP Pit Pass at the front of stage with a full cash bar, VIP lounge with full cash bar and food, an invitation to the VIP After Party and memorabilia signed by Hunter.

Doors will open at 4:30 p.m. and the concert will begin at 6 p.m. Click here to purchase tickets (scroll down to select the Lexington show). A portion of the ticket sales will benefit the Thoroughbred Aftercare Alliance and the USET Foundation. 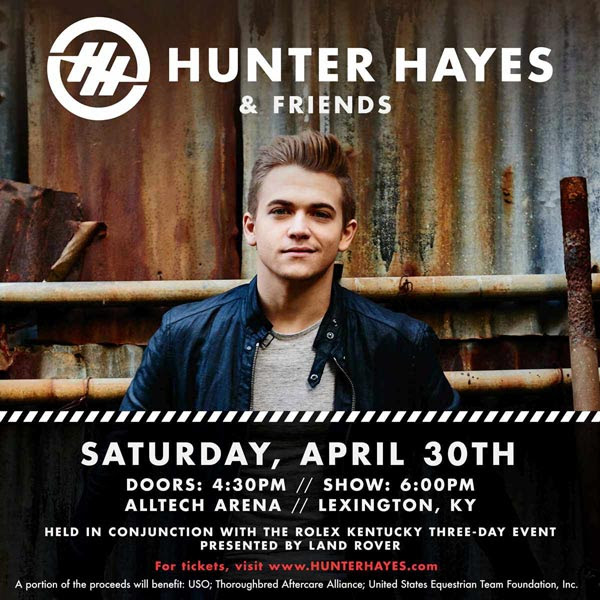 McKenna Oxenden is a 19-year-old sophomore in college hailing from Columbia, Maryland. She is a Training level event rider with her eyes set on a Preliminary move-up in early summer with the 15.1-hand Trakhener cross mare “Gossip Girl” aka Gigi. She has worked for CCI4* event rider Emily Beshear and Advanced eventer Courtney Sendak of Defying Gravity Eventing. McKenna currently trains with Chrissy Hollnagel and Sara McGowan of Willow Run Eventing. She is presently attending Marquette University in Milwaukee, Wisconsin, to attain a degree in the field of Journalism and a minor in both Photography and Digital Media