Olympic eventing has shape-shifted quite dramatically over the years, with early editions being nearly unrecognizable side-by-side with the modern sport. As we approach the 2016 Olympic Games in Rio, and with so much discussion taking place about where to take the sport in the future, we’re taking a look back at its evolution over the past century. Click here to read previous editions. 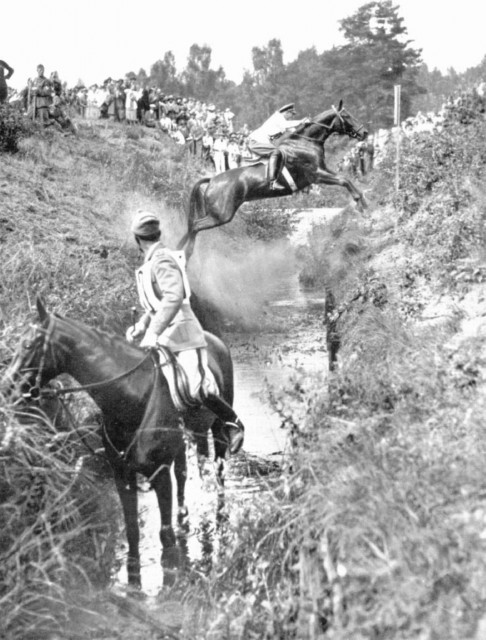 As a journalist who was literally evacuated from the equestrian venue during the test event last year — because a major drug lord had been killed and there was concern about retaliatory gang violence in the streets, no big deal — and then was kept up all night by the sound of gunfire and mysterious explosions in the distance, I GET IT.

But believe me when I tell you that when it comes to eventing, whatever happens in Rio will have nothing on what went down at the Berlin Olympics in 1936. Here’s a synopsis of the competition, as gathered from the official IOC report.

Things started off innocently enough. After dressage had a stint as the sport’s final phase in 1912, then was scrapped altogether in 1920, by 1936 dressage was back and occupying its modern position as the first phase of the eventing competition. Beginning with the first movement, “Enter at the gallop,” and featuring 13 minutes worth of various paces and figures such as the “zigzag,” the dressage at this Olympic Games went off without a hitch.

The real trouble began during the cross country competition, a five-phase test that spanned 36 kilometers (22 miles) with a time limit of just over two hours.

Nobody saw this thing coming.

Many riders, not knowing how to approach such a jump, ran at it full-tilt, clearing the hurdle only to succumb to the drag of 3-foot deep water and treacherously boggy footing on the other side. According to the event report, of 46 horses who jumped into the pond, there were 18 horse falls and 10 rider falls.

Here’s a video of competitors negotiating the pond with varying degrees of success:

I can’t decide whose save is more amazing: the Italian’s …

But for sure my favorite moment is when the soggy rider marches off in disgust when his horse decides, post-fall, to seize the moment for a water break.

Later the fairness of the obstacle was called into question. Some claimed the competition was rigged, that the Germans had known such a jump would be on the course and thus claimed an advantage.

Home-team advantage speculation wasn’t limited to three-day eventing, as the Germans claimed all individual and team medals in straight show jumping and dressage as well.

The officials rebutted, “In Olympic tests, above all, horses and riders should prove that they can overcome any difficulty.” They pointed out that “several other obstacles had much more influence in determining the final results or causing the elimination of horses,” citing the obstacle immediately after the pond, a ditch where 10 horses were eliminated, as an example.

(Later that year, however, the FEI ruled “to bar jumps over hurdles into ponds in international three-day-events because these obstacles might cause too many accidents” — a decision that, of course, has since been reversed.)

At the end of the day, 27 out of 50 entries completed the course.

Out of all this chaos, a few narratives of glory emerged. One of them was the story of Jenny Camp, the great American event mare ridden by Col. Earl F. “Tommy” Thomson, who posted relatively few jumping faults (40 on cross country and 10 in show jumping) to bring home the individual silver medal.

The event report spared few words for non-German competitors but had this to say of Jenny Camp: “It was a delight to watch this eager yet careful horse work. Her rider, the American, Captain Thomson, is the prototype of a splendid military rider, with a brave heart and clear judgment.” 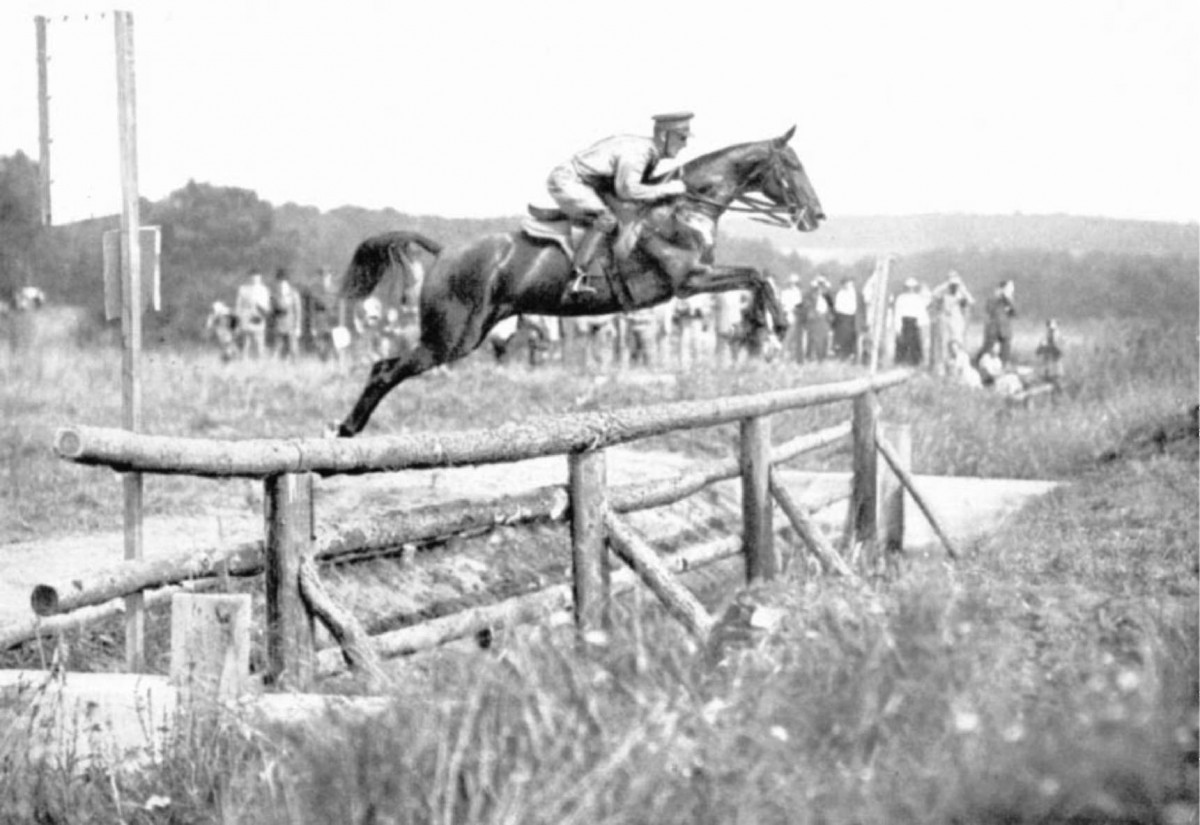 But my personal favorite story of the Berlin Olympics is that of Kurfürst, ridden by Lt. Freiherr von Wangenheim of Germany.

After sitting 46th following dressage (the IOC report reads, “For reasons which could not be exactly determined, Kurfürst became somewhat confused during the dressage test with the result that some of his figures were failures”), horse and rider set off for cross country.

Like so many before, Kurfürst fell at the pond. Although the horse waded into the middle and for several moments refused to be caught, Wangenheim eventually remounted and, despite a broken collarbone, finished the course without interruption. 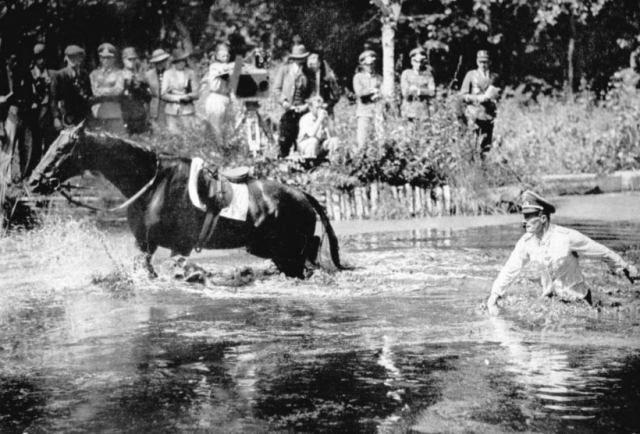 Lt. Freiherr von Wangenheim of Germany broke his collarbone at the pond, then fell again in show jumping, but completed the event to help Germany win team gold. Photo: IOC

Unfazed by the previous day’s disaster, and with Wangenheim’s arm immobilized in a sling, the pair prepared to tackle the final jumping test. The goal: to finish the course so that the German group would remain complete and eligible for a medal.

Things were going well … until the in-and-out. Kurfürst, who was said to be “fresher and more enterprising than ever,” made a rush for the second fence. His rider hauled back on the reins, causing Kurfürst to rear and fall over backwards against the jump, momentarily pinning Wangenheim beneath him.

No one recounts the drama of what happened next better that the IOC report itself:

“The rider quickly crawled out from under the horse. Kurfürst, however, lay as if he were dead. There was breathless silence in the stadium. Then Kurfürst leapt to his feet as if he had awakened. His rider mounted him without help. From this point to the end he made no further faults. Despite Kurfürst’s 310 penalty points on the cross country stretch, the German riders had also won the team competition. No pen can describe the impression made when over one hundred thousand enthusiastic human beings give vent to their delight.”

All of which is to say, even before there was red on right and white on left, there was always insanity in the middle.

Stay tuned for our next edition of Weird But True Olympic Eventing History. Go Eventing.