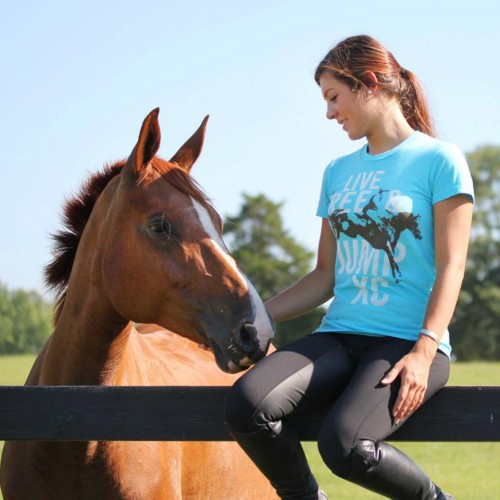 “Live Free and Jump XC” (photo by Rather Be Riding Photography)

Ah the holidays. Colder weather, over-eating, baking, clipping horses, gift giving and gift buying, and of course, gift anxiety. Tis the season to have absolutely no idea what to get any of your friends or family, for the umpteenth year in a row. Every once in a while you find the perfect present, but especially for horsey friends, the pressure is on. Obviously you’ll be purchasing something horse-related, but does it have to be pink and have a fat pony on it? We here at Eventing Nation say NAY! That’s why this holiday season I’ve corralled each one of our impressive staff writers into picking one unique, amazing, thoughtful and clever horsey gift to help you along during this time of stress. We’ve chosen things that we want to get for the holidays, so obviously they are phenomenal ideas.

I’ve chosen to get the ball rolling with a particular company that I stumbled upon this summer while perusing the internet. Dapplebay is a small up and coming business run by a young eventing enthusiast (Leah Anderson) who recently moved into the middle of the eventing hub from the state of Washington about a year ago. “I originally worked in a normal office with regular 9 to 5 hours in Seattle as a graphic designer” says Leah, “so my background in that has really benefited me in this venture.”

“In July of this year, I designed the ‘Live Free and Jump XC’ t-shirt and it got shared on Facebook and positively blew up!” explains Leah, “I decided to take a chance and I printed out a bunch of them in a friend’s screen printing shop, went to a horse trials at Chattahoochee Hills and sold out over the weekend.” 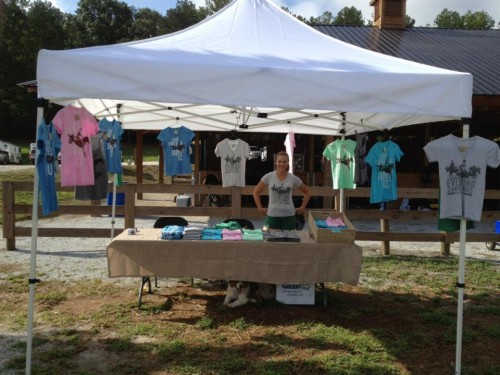 This information is unsurprising, since her designs feature smart and bold graphics with colorful options. I immediately ordered a v-necked t-shirt and I have been impressed with several aspects so far. The fit of the t-shirt is incredibly flattering, not too tight, but just enough tuck at the waist to compliment your figure. The material is super soft, but also durable for riding 10 horses, throwing it on the floor, and then washing it with the lack of sophistication that comes with being 20-something and not really bothering with the intricacies of the washing machine. It also helps that the shirts are incredibly reasonably priced, and since the chinchillas at EN aren’t bankrolling mink coats, I appreciate that. I have thus far been complimented on my shirt everywhere I go while wearing it.

“Recently, I did a few more designs, on few more types of shirts and colors, and went to the AEC’s, where I also sold out. For the winter, I have even more new designs, and I’ve introduced long sleeve t-shirts and hoodies. I also had a lot of requests for shirts without words, so now I have new designs that feature bold graphics that wrap around the body of the shirt.” 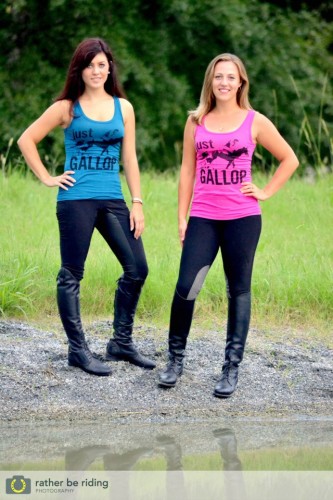 “Just Gallop” tank (photo by Rather Be Riding Photography)

When I asked where I could find these shirts besides her website, Leah told me about her plans for the future. “I’m hoping to be able to set up wholesale, as a product line that tack stores can carry for 2013. Eventers are such an enthusiastic people, it’s amazing that there aren’t eventer-specific clothing like this out there already.” C’mon Dover, SmartPak, get with this girl! These shirts will sell like hot cakes!

I’d never really thought about it before, but most clothing that is horse-related is either in the pink Thelwell design, or in the super serious professional manner. This is part of the reason I was so excited to find these shirts, they don’t make me look like a 9 year old girl, but they don’t make me feel like a 45 year old maiden either. Leah laughed, “ The modern bold design doesn’t really exist in equestrian clothing. It’s everywhere in stores like Express or American Eagle, but nowhere in horse clothing. I wanted to design something trendy, but also cool. I want to be able to wear something that represents my passion, but won’t make my non-horsey friends think I’m crazy.” 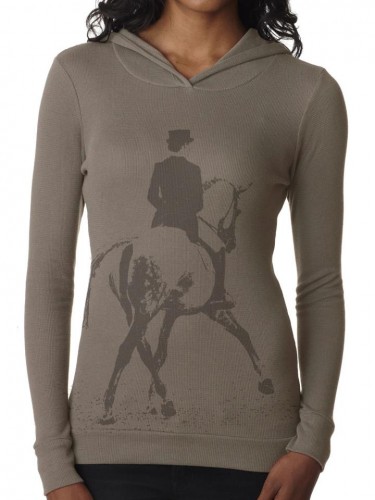 Feeling the cold snap? Check out the new soft and cozy hoodies! (photo by Cheval Photos)

While Leah’s shirts are taking off in a way she never expected, she still spends as much time as she can with her OTTB project horse, Pie, who she brought all the way to Georgia with her when she moved. “I haven’t really evented since High School, but I’m really excited to get out again on Pie this spring.”

For my part, I see these shirts as great gifts for the younger kids who are currently in the “barn rat” stage, the teenagers who are fashion conscious, and pretty much anybody who wants to be trendy and promote their Eventing enthusiasm everywhere they go. Check it out!