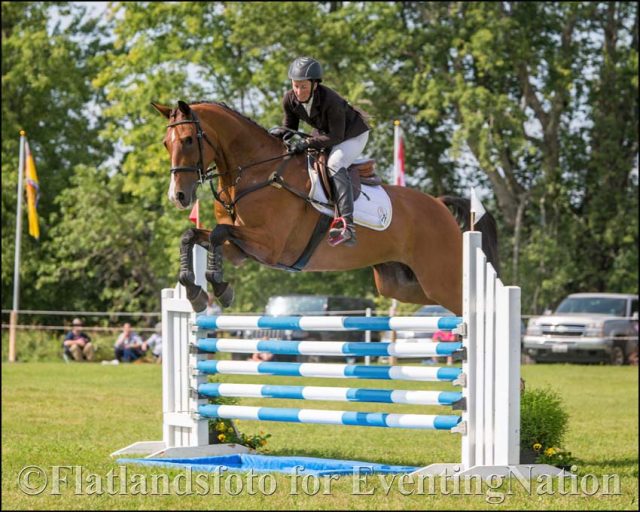 Holly Jacks-Smither dominated both CCI divisions at the inaugural Foshay International CCI in Lower Jemseg, New Brunswick, which awarded $25,000 (CDN) in prize money and was praised as a fantastic addition to the Canadian eventing calendar by competitors and spectators alike.

Finely Brewed won the CCI* and stablemate Candy King placed second, but it was Holly’s one-eyed mount Favonious Nite who stole the show with his victory in the CCI Introductory 1.05-meter division.

Bred to be a dressage horse but ultimately deemed “too naughty” for a career in the sandbox, Favonious Nite found his way into Holly’s barn to try his hand at eventing. She successfully produced him through the lower levels, but when he lost his left eye in a trailering accident last August, Holly wondered if he would ever event again.

Holly owns the now 8-year-old Dutch Warmblood gelding with Mark Marquis, and they agreed that if “Favy” didn’t want to jump after losing his eye, he would go to Canadian Grand Prix dressage rider Alex Dvorak as a pure dressage horse. 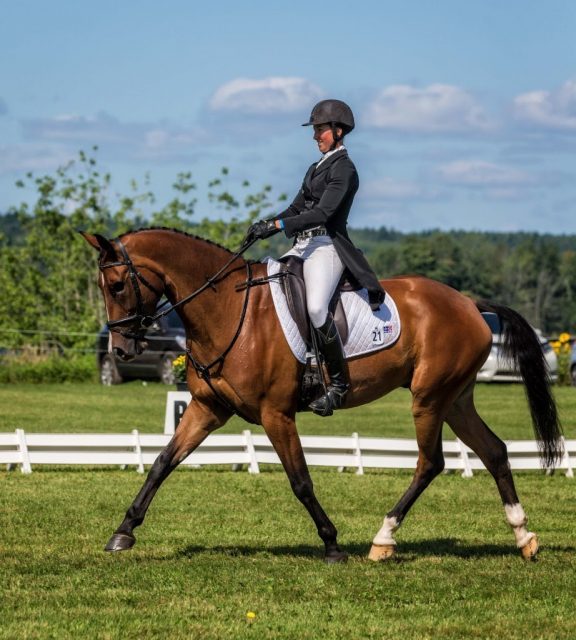 But Favy made it very clear that wanted to keep jumping and running cross country. Six weeks after losing his left eye, he returned to eventing at Training level and won. Holly said Favy has adapted remarkably well with the changes in his vision, and her coach Buck Davidson has helped her develop certain strategies that allow the horse to cope.

After she retired on cross country at his first CCI* at the Ocala Three-Day in April, Holly decided to take Favy to Foshay in the lower 1.05-meter CCI Introductory division, which the FEI introduced as a new height in 2018.

“He’s qualified for a CCI*, but he’s really strong,” Holly said. “I knew I wouldn’t be able to make time in the one-star, so the Intro division was perfect. The course was fantastic and challenging with perfect footing, and I found it tougher than the CCI* course since those horses aren’t as seasoned.”

Holly and Favy led the CCI Introductory division from start to finish, adding 2.0 time penalties on cross country and one show jumping rail to their dressage score to win on 32.8.

Lena Rindermann and her own Maniac 4, a 12-year-old Trakehner (Faberger X Moosliebe, by Hohenstein), finished second in the CCI Introductory on 35.7. Roxanne Valois and her own Power Play, a 12-year-old Canadian Warmblood (Ikoon X Duchess Law xx, by Bridle Path xx) bred by Nicolas Pasquier, finished third on 36.3. 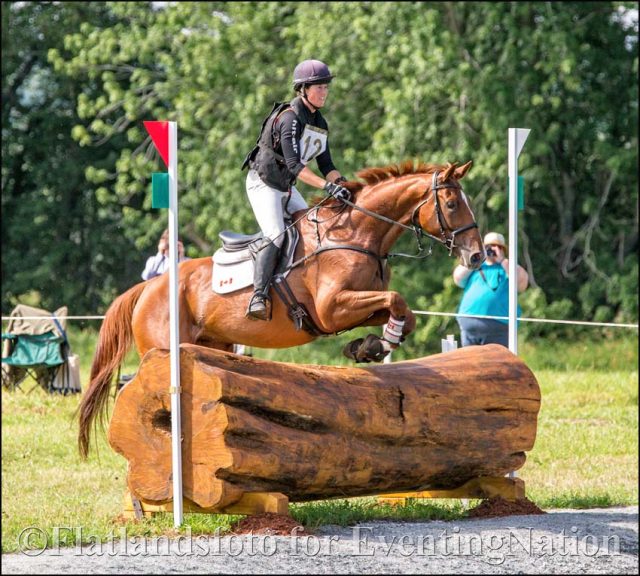 Looking to the CCI*, Holly won with Finely Brewed, a 7-year-old Thoroughbred gelding (Milwaukee Brew X Capture The Spirit, by Conquistador Cielo) bred in Canada by Mane Stream Racing Ltd., on his dressage score of 32.0.

“Bud” came to her husband, Bruce Smither, to be re-broken after he had thrown multiple people while in race training. It took six months to re-break the horse, and while his owner Bernadette Johnson agreed to let Holly take Bud as an event horse, Bruce was not exactly keen on the idea of her competing him.

“My husband is an extremely good horseman,” Holly said, “and to to this day if the horse gets worried and you tell him ‘woah,’ he will listen” — but Bud still retained plenty of quirks.

“He is funny on the ground. He has to be tacked and untacked a certain way, so I have to ask to be excused early from the vet box at FEI events,” Holly said. “He’s a horse that I’ve always loved, and I’ve always had big dreams for him. It’s also special because I used to gallop racehorses for Bernadette, and she has supported me ever since I came out to Ontario.”

Bud has had a strong season since stepping up to the CCI* level at the Ocala Three-Day in April. He finished 20th in the Bromont CCI* in June and then won the CIC* at GMHA last month.

After winning the CCI* at Foshay, Bud will enjoy a break before ending his year with a move-up to Intermediate to cap the season. Holly’s end goal is to get him qualified for the 2019 Pan American Games early next year in the hopes of representing Canada in Lima, Peru. 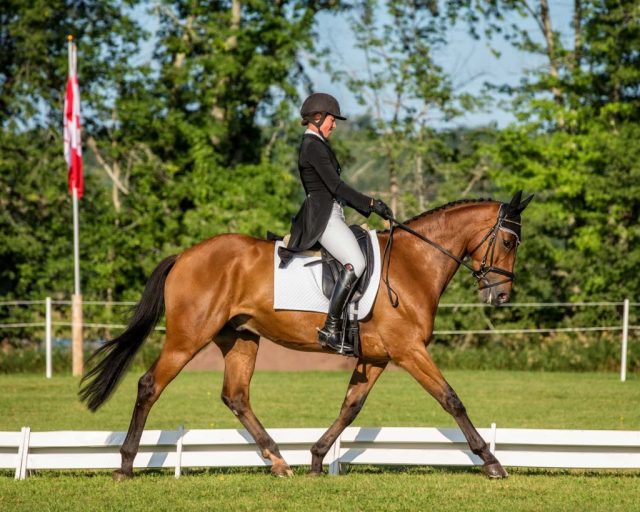 Holly joked that she had a band of misfits at Foshay — a horse with one eye, a quirky one that had to be re-broken, and one that survived colic surgery. She is also excited about Mark Marqis’s Big Pretty, a 6-year-old Thoroughbred mare who sat third in the CCI Introductory after dressage but had a green mistake in cross country.

“At this time last year, things were looking pretty grim,” Holly said. “It goes to show you how much things can change in a year. It’s exciting to have a group of four horses who are all so talented and going so well.”

Looking to the rest of the CCI* leaderboard, Waylon Roberts finished third with Aletta Martin’s Wil Celtic Charlie on 36.0 in the horse’s debut at the level. “Charlie,” a 6-year-old Irish Sport Horse by Porsche, won the Bromont CIC* last month, and Waylon intends to qualify him for the Pan American Games early in the 2019 season. 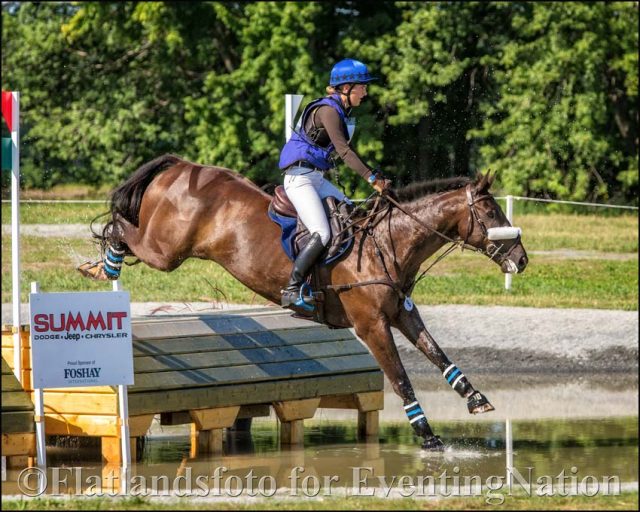 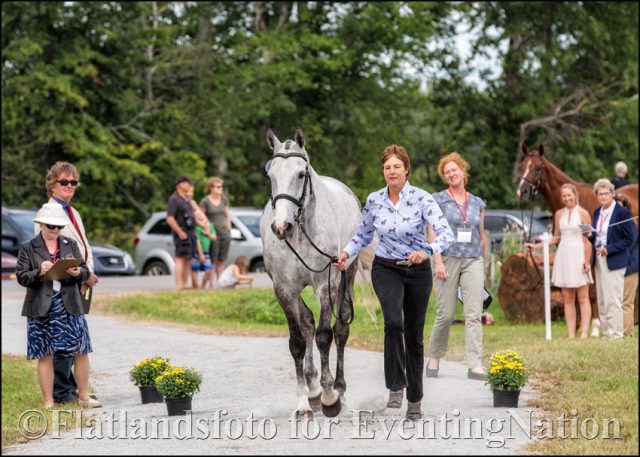 Looking to other award winners, Penny Rowland received the award for Best Turned Out with Dynamo, and Debbie Recoskie was named Best Groom after providing top care for Holly Jacks-Smither’s horses. 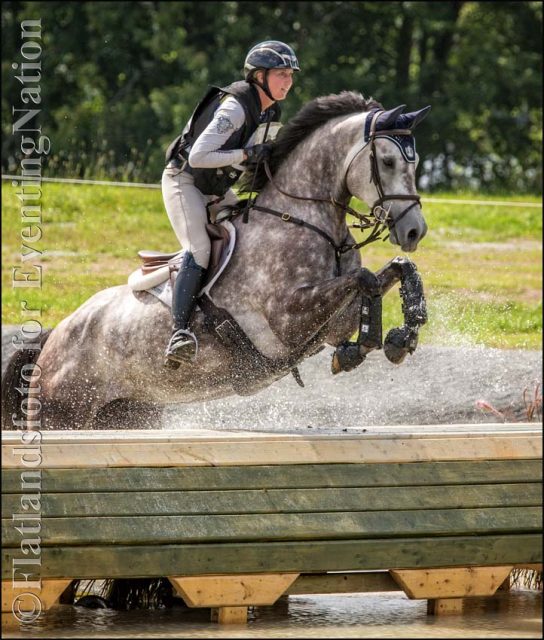 The inaugural running of Foshay was hailed a massive success, with the community surrounding Lower Jemseg coming out in full force. An estimated 1,800 people from the Maritime provinces and beyond lined the galloping lanes on cross country day to cheer on the competitors.

“The event truly has an international feeling, with proper galloping lanes and the same level of hospitality that you would see at a major FEI event,” Holly said. “We camped on the Saint John River and had bonfires every night. It was a fantastic time. I plan to come back with a huge group of people next year.”

A post shared by Foshay International (@foshayinternational) on Sep 1, 2018 at 10:28am PDT

Foshay co-chair Rob Stevenson not only ran the event but also competed in the Modified division with Gigolo VK. We have to send a huge shoutout to Rob and Suzanne Stevenson, technical delegate Sue Ockendon, cross country course designer and builder Jay Hambly, show jumping course designer James Atkinson, and a slew of team members and volunteers who worked tirelessly behind the scenes to make the event a success.

“The inaugural Foshay International exceeded my own expectations — it took on a life of its own,” Rob said. “The horses, the riders, the officials, the volunteers and the community all seemed to be having a great time. That really was the whole idea: to host a fun and accessible FEI event.

“Jay Hambly designed and built inspiring courses. James Atkinson flew from California to set the show jumping. Diarmuid Byrne of EquiRatings joined us for the weekend to ensure that all key statistics were captured and communicated.

“We are very lucky to have such great ground along the river — when the horses are happy, it sets a great tone for the whole event. I believe that a great many positive forces came together to create the amazing experience that we had this past weekend.” 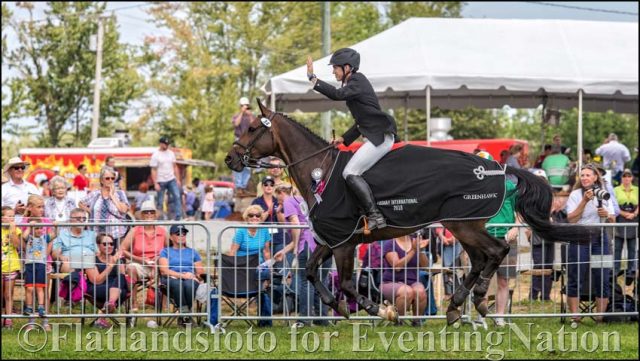 Mark your calendars for next year’s running of Foshay International, Aug. 29-Sept. 1, 2019. Stay tuned for a special edition of Who Jumped It Best featuring beautiful images from Joan Davis/Flatlandsfoto. Be sure to follow Foshay International on Facebook, Twitter and Instagram for all the latest updates on Canada’s newest FEI event. Go Foshay. Go Eventing. 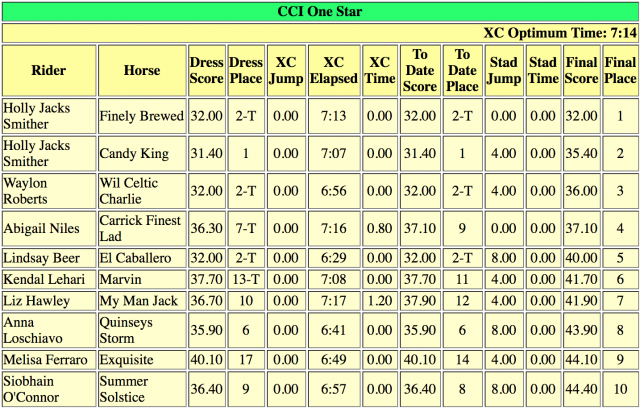 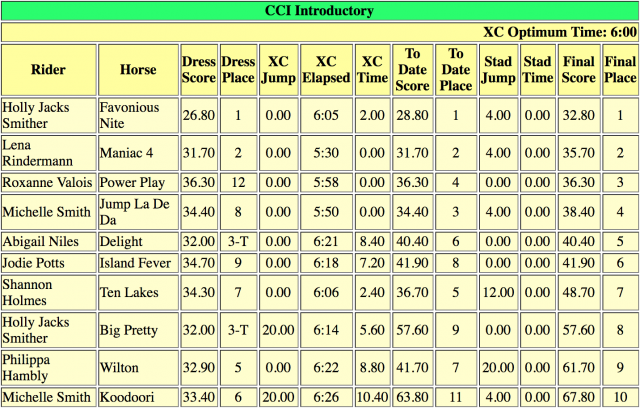