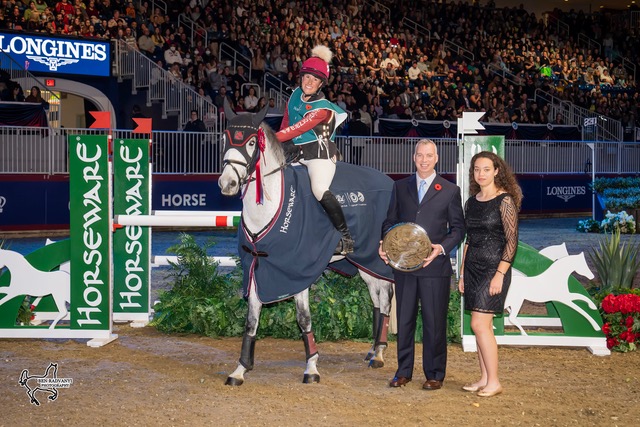 Canada’s Royal Agricultural Winter Fair was a (barn) family affair for Holly Jacks and her crew of approximately 60 friends, clients, and supporters who came together to cheer on her efforts competing in the indoor eventing, in honor of Zara Buren. The Horseware Arena Eventing Challenge, which featured two evenings of classes, was comprised of 2*-4* level cross-country fences incorporated into a challenging course designed by Captain Mark Phillips.

Imagine having to navigate 16 solid cross-country jumps and three traditional show jumps, in an arena the size of a hockey rink, with the winner laying down the fastest optimum time. Those questions came up quickly, as Holly and Josephine masterfully navigated each question on Friday night with the fastest time and one rail. On Saturday they edged out the previous winner, Waylon Roberts, and guest competitor Michael Jung when they laid down the only clean round of the evening.

Josephine is a 2013 TB/Appaloosa/Swedish Warmblood owned by her breeder, Donna Van Beek, and was backed as a 3-year-old by Holly. During her three- and three-year-old years, Josephine would spend the summer months with Holly in Canada, before heading home to Donna’s for the winter. But as she progressed in her training, it was evident that she was a bit more challenging than a typical amateur’s horse.   She went into full-time training with Holly as a seven-year-old, traveling to Ocala to compete during the winter and early spring seasons. 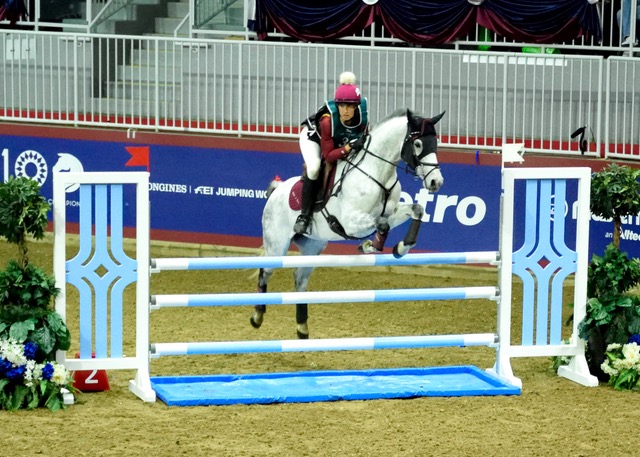 Having owned both Josephine’s dam and grand-dam, it was not surprising to Donna that the mare could be a bit tricky.

“I rode all three generations of the mares who were bossy, opinionated mares,” she says. “In fact, that aspect of their character is apparent in Josephine — as they, too, could be tough at home, but would step off the trailer at a show as if to say ‘look at me!’”

And according to Holly, that is exactly how Josephine entered the electric arena atmosphere at The Royal.  “She’s not always an easy mare to ride,” says Holly, “but we got to The Royal and she wouldn’t put a bare foot wrong.  That was the classiest she’s ever been, and it appears she’s ready to step up.”

Donna is very complimentary of Holly. Josephine was bred to be Donna’s last horse, and she does get to enjoy flatting her at Holly’s training base in Ontario, Canada.  She didn’t envision that Holly would campaign her up the levels, but the mare just keeps getting better and better.  She’s only competed for two seasons, both with Holly, and has never had a stop on cross country, with top placings at many of her events. She stepped up to the CCI2* level last spring at Ocala Horse Park, placing eighth, and was sixth this past summer at Bromont International.

“I’d just like to see her be the best she can be,” says Donna. “It’s a bit of a surprise how quickly she’s ready for the next level and stepped up. The bond and trust between the two of them is amazing. Holly takes every opportunity to prepare her for what’s to come.”

On her plans for the horse’s future, Donna says: “I don’t have grand thoughts but I’m happy she’s moving along. Holly’s bond with her is just like she had with [More Inspiration]. I just basically enjoy riding her. To have bred and owned three generations of horses and to have my horse win at The Royal is beyond belief and very exciting!” 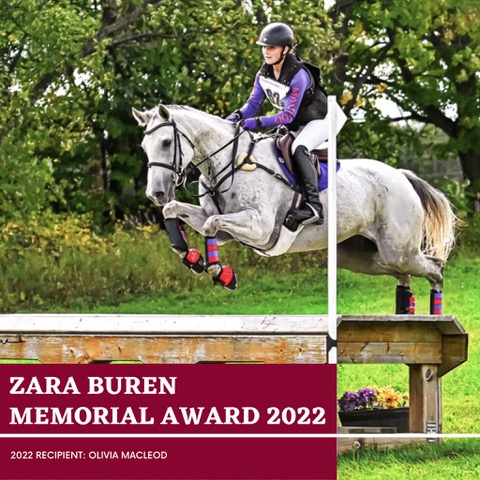 The weekend at The Royal was also a time for barn family connections at the Winter Fair, as this was the first time since Covid, and losing Zara, that the show has been held. Although reflective and bittersweet, it was a coming together in remembrance of Zara Buren, an incredible young student of Holly’s who was lost in a heartbreaking accident while hacking out with her mother in 2020.

There were 60 people strong in attendance from the barn who came to celebrate Zara — including her mother Sabrina Haque, who continues to ride Zara’s horse, Monkey.

Holly continues to be inspired by Zara’s family, who have faced the loss of their daughter with such grace.

“Zara’s family is amazing. Her Dad became a paraplegic from a mountain biking accident and has raced in iron man competitions,” she explains. “He was the first Canadian to finish the Kona IRONMAN® World Championship in Hawaii and was 2nd overall in the wheelchair division. Zara’s older sister is also a very talented ballet dancer, currently studying in Amsterdam.”

Shortly after Zara’s accident, the family established the Zara Buren Memorial Fund, an annual award given to a young applicant who best exemplifies the same qualities as Zara.

“Zara’s award is based on horsemanship and the love she had for the sport and her barn mates. I was lucky to have had Zara in my barn; she was a role model to all, even at 14. It has brought our barn really close together, as we talk about her often and really try to help support each other,” Holly reflects.

The award is made available annually to an Ontario rider, 18 years old or younger, with a preference to 14 and under, who has competed in the discipline of eventing at the Preliminary Level or below, and who exhibits a passion for eventing as well as a commitment to their horse. The recipient will demonstrate horsemanship and sportsmanship and will show a desire to train in the Young Rider/U25 development program. The award recipient will receive $6,000, distributed in three equal installments throughout the year to support training, rider development, and competition participation.

Olivia Macleod was selected as the recipient of the 2022 Zara Buren Memorial Award out of an applicant pool of 17 young riders.

In addition, the following outstanding applicants will receive Grants of Distinction:

“Olivia, who won this year, is actually one of my students,” says Holly. “In addition, the foundation made a one time donation of $1000 to support Cassandre Leblanc’s trip to Tryon to be part of Team Canada’s Young Rider team.”

Cassandre, who has been training with Holly for more than seven years, had to dig deep and overcome some setbacks in order to achieve her place on the team and make the 22 hour trip to Tryon, North Carolina. According to Holly, “Last winter Cass came to Florida and didn’t even finish an event. She just worked on her show jumping at home and at schooling venues to save money.  She was in a place where she often found herself being eliminated, or worse, in the dirt.”

But Cassandre didn’t quit.  “She put so much time into cantering cavellettis, counting, changing the balance, working on her position, all the little basics that I promised her would make a big difference,” reflects Holly. “There was blood , sweat and a lot of days of tears. After months of work she qualified for Young Riders, she was put on the team and didn’t think she could attend due to financial reasons.”

Through the help of Zara’s Memorial Fund, and additional donations, she was able to make the trip — and her efforts paid off.  Not only did Cassandre win individual bronze, but her incredible determination also helped Team Canada win the silver medal.

“This year with the World Championships, Cassandre’s trip to Young Riders, and Olivia’s grant success, we have had a great year and the support for each other has been amazing. Zara was a shining star who still rides on our shoulders.”

Holly wants to take this moment with her win at The Royal, and the success of her young students, to draw attention to the memorial fund.  Zara was an incredibly loved member of Holly Jacks Eventing, and the barn family wants to see her memory celebrated each year through this fund.

Please consider making a donation through the following link: https://www.zaraburen.ca/.