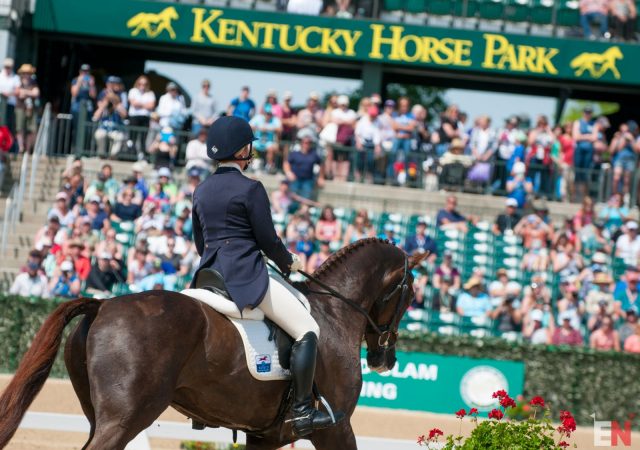 The economic devastation of the global coronavirus pandemic continues to impact businesses both large and small, forcing quick thinking and willingness to pivot in order to survive. In the wake of the cancelation of the 2020 Land Rover Kentucky Three-Day Event, Equestrian Events, Inc. (EEI) — the organization that has managed major horse trials at Kentucky Horse Park since 1975 — is looking ahead to this year’s event, scheduled for April 22-25, with cautious and realistic optimism.

With many variables still up in the air, EEI Executive Director Lee Carter this week issued a letter stating his team’s determination to run the event. The state of Kentucky, at this juncture, has allowed small percentages of spectators at sporting events, which Lee views positively as he looks to April. The event’s success this year, he says, is highly reliant on ticket and spectator revenue. This remains a fluid situation, however, as the state remains in the “Critical” tier for its Current Incidence Rate and the COVID-19 vaccine has been slower than anticipate to roll out.

EEI was forced to reduce its staff by nearly 70% at the height of the economic withdrawal, but was able to secure Paycheck Protection Program and Economic Injury Disaster funding to bring its staffing numbers back up to 50% — still a skeleton crew of six for the monumental task of pulling off an international event.

Regrettably, Lee says, the prospect of running without spectators at all is not financially feasible. The organization has $900,000 in its reserve from rolled over ticket and sponsorship sales. If the event is canceled or run without spectators, those funds will need to be returned, effectively eliminating the funding to run the event at all.

So what can we do to support what was North America’s sole five-star until the Maryland Five Star came to fruition? Lee says Equestrian Events, Inc. is asking for tax-deductible donations and is also open to suggestions for fundraising and other ways to salvage the event in the worst case scenario.

“We are a 501(c)3 nonprofit, but historically we have not gone out and solicited donations,” he explained. “We haven’t needed to, as the event in April has sustained us. We know how hard other, smaller events work to stay afloat and we don’t want to take away from that. We want to use our event to lift up the entire sport as best we can.”

“Those funds rolled over from 2020 are going to come due one way or another,” Lee said. “So if we have to refund everybody, how much do we have left and how much can we deal with?”

There are too many variables to make a definitive call right now. Lee says EEI will apply for the second round of funding for the Paycheck Protection Program, which opened up this week. He also feels comfortable with the status of EEI’s investments — though a tumultuous market in 2020 has him cautious in terms of future projections.

At the end of the day, Lee does “believe there is a pathway forward,” but with so much still up in the air — and likely still to change — the best he can do is plan for the best but prepare for the worst.

Lee told EN he is happy to accept ideas for fundraising or other means of assistance — those interested in providing feedback can email [email protected]. You can also make a tax-deductible donation to EEI here. Those donating $500 or more will qualify for an exclusive ticket presale for the 2021 event.

“The eventing community is tremendous,” he said. “I meant what I wrote in my letter that we know they will do whatever we ask them to do to run this event responsibly. There is a scenario where (the end of the event) is where we are, but there is also a scenario where we live to fight another day.”

We will continue to update this story as it evolves. Go Eventing.