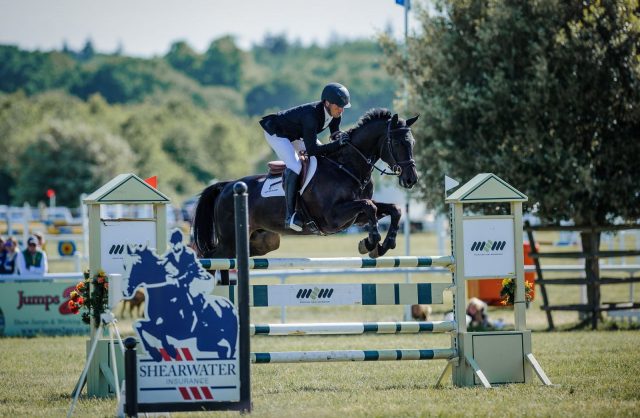 Tim Price and Vitali retain their first-phase lead after a faultless showjumping round. Photo by Tilly Berendt.

We’ve seen the showjumping phase at Houghton International‘s CCIO4*-S and Nations Cup exert plenty of influence in the past: set on an undulating grass arena, it cleverly tricks riders into using more of the available space than they really need, which can make the time as much of a decider as the rails that inevitably fall. Today, though, it was considerably less dramatic, with just 34 of the 90 starters pulling rails and a scant six riders adding time penalties. That meant that the upper end of the leaderboard was largely unchanged through the course of the afternoon’s action: Kiwi team anchors Tim Price and Vitali remain at the head of the class on their first-phase score of 21.2 after logging a neat, stylish round that helped to put their tricky Tokyo showjumping round into the annals of last season. 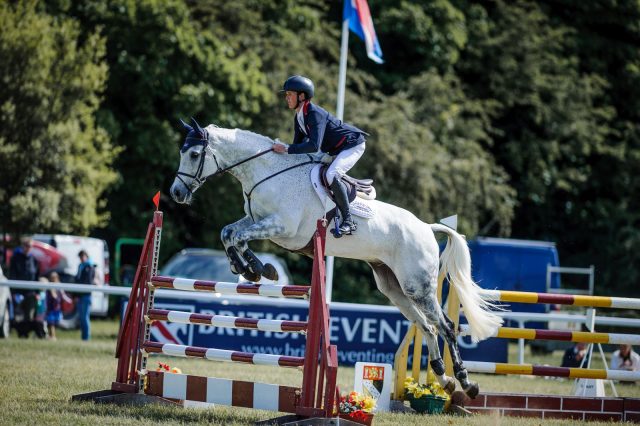 In fact, the entire top five is unchanged: Tom McEwen and Bob Chaplin, who are pathfinders for the British team, remain in second place on their clear round, despite a slightly tricky warm-up, and Oliver Townend‘s exciting young mare Cooley Rosalent keeps her place on the podium in what is just her second start at the level. 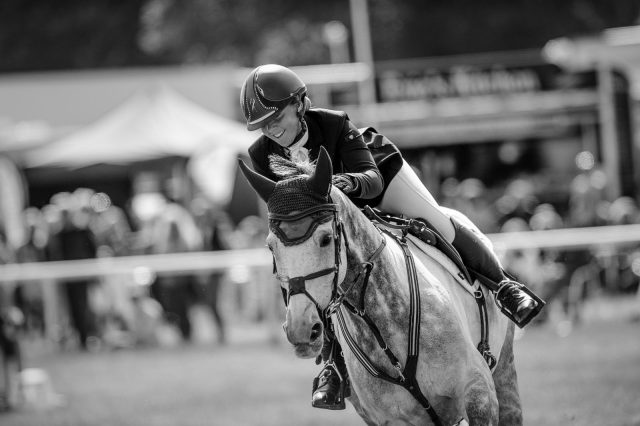 Heidi Coy celebrates after an exciting clear with the ten-year-old Russal Z for fourth overnight. Photo by Tilly Berendt.

Heidi Coy‘s assault on her Nations Cup debut continues on apace, and she’ll go into tomorrow’s cross-country finale holding onto fourth place with the ten-year-old Russal Z, who carries over a score of 26.3, followed up by Kitty King and her Rio Olympics mount Ceylor LAN, who has ‘retired’ to tackling four-star shorts for fun these days. 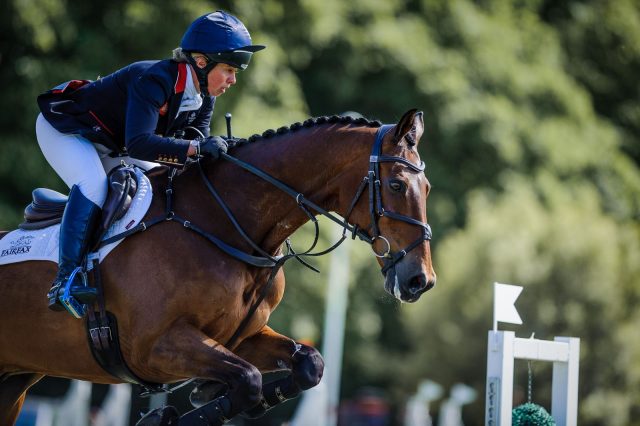 Kitty King and Ceylor LAN get the job done to remain in fifth place. Photo by Tilly Berendt.

In fact, the most significant influence exerted on the leaderboard came in the form of withdrawals: just four horses were pulled prior to showjumping but one of those, Izzy Taylor‘s Monkeying Around, was ninth after dressage and another, Bundy Philpott‘s Henton First Lady, had been a part of the New Zealand team, whose three remaining combinations’ runs will all count tomorrow.

That doesn’t stop the Kiwi team, helmed by Tim and Vitali and well supported by Jesse Campbell and Cooley Lafitte (39th on 35.4) and Bruce Haskell and Ex Cavalier’s Law (33rd on 34.9), from remaining in second place overnight on an unchanged aggregate score of 91.5. Great Britain, too, add nothing to their overnight aggregate score of 79.2, with all four riders jumping clear and inside the time allowed today. 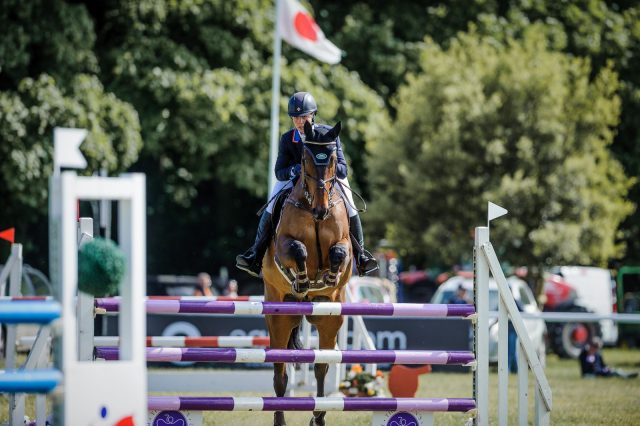 Team USA holds onto third place for another night, though with a slight switcharoo: Isabelle Bosley and Night Quality had an unfortunate rail at the final fence, putting them on a two-phase score of 43.3 and moving them into the drop-score spot, taken over from Cornelia Dorr and Daytona Beach 8, who jumped a sparkly, speedy clear.

“The atmosphere definitely perked him up a bit but we had one unlucky rub at the last, when he got a bit strong coming down the hill and just kind of caught it the wrong way in front,” says Isabelle, who goes into cross-country tomorrow in 70th place. “But I’m so happy with how he handled the atmosphere, and he felt super the whole way around.”

Though many US venues are blessed with surfaces for showjumping, Isabelle compares Houghton’s undulating ring to that at Pine Top: “but then, you add the atmosphere here,” she says, “and they really sit up and take notice. But that actually helps him jump better.” 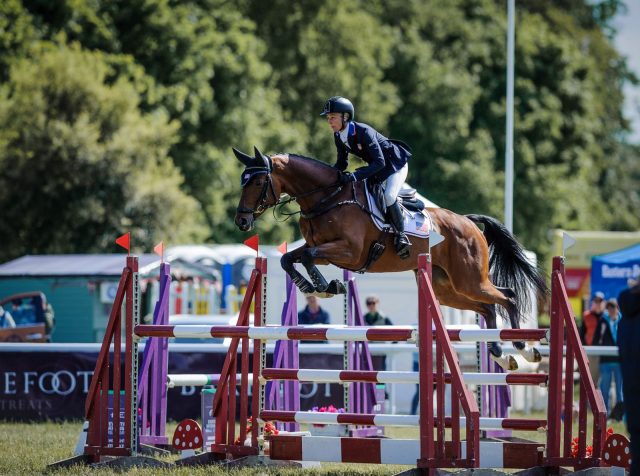 Cornelia’s team pathfinder round was an impressive exercise in tact, as the speedy, huge-jumping Daytona whizzed her way around the track in a sharp reversal from how she’d behaved in the warm-up: “She was so quiet in the warm-up, and I sort of know that if she’s quiet in the warm-up, she’s wild in the ring,” says Cornelia with a laugh. “I went in and was like, ‘I’m not really sure what to do right now — I just really need them to ring the bell!’, but she was really good. She’s so switched on, but I do wish she’d let me help her a bit more today. When she’s like that, I have to rely on her athleticism a little bit — she just needs me to steer!” 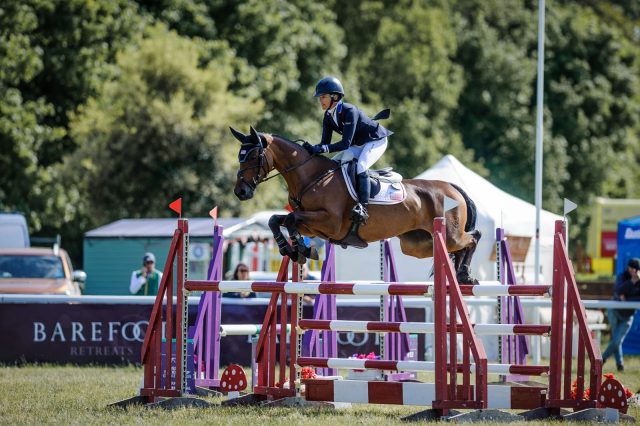 Allie Knowles and Ms Poppins flirt with the top ten after another excellent performance. Photo by Tilly Berendt.

Allie Knowles and the super-smart Ms. Poppins remain at the forefront of the US effort, pinging their way to a tidy clear and sitting 12th as individuals overnight on their 29.6.

“She’s a wonderful jumper — she just went in there and felt like Ms. Poppins,” says Allie, who is quick to praise the eleven-year-old’s consistency. “She went in there and pricked her ears up, after having been dead quiet in the warm-up. I saw the ears go up and I said, ‘okay, good, you’re present!’ I probably should have gotten her going a bit more before we started the round, but once I jumped that first fence, she was right there. She’s fun to jump, and if I make a mistake, she gets out of the way for me — but luckily, today was pretty smooth! As we went around, she just kept getting higher and higher — I was like, ‘okay!‘”

The close team rotations meant that each rider only got to watch one or two of their compatriots before being spirited away to the warm-up ring themselves: “That was a bit of a shame, and Leslie [Law] couldn’t watch our rounds because he was in the warm-up helping us, which was a bummer — but we did have hours and hours to watch [the non-team competitors] and see how it was riding, and overall, it did ride well.” 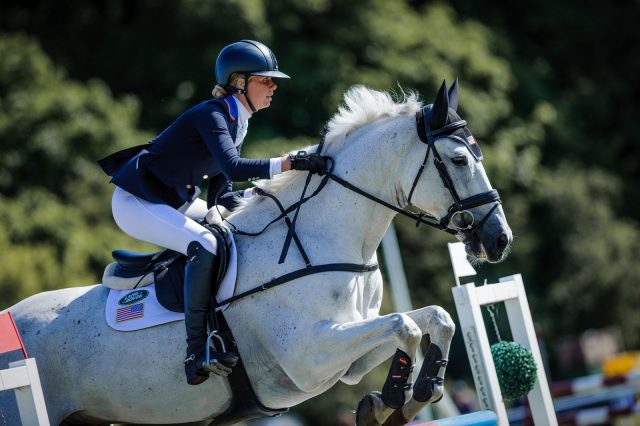 Fifteenth-placed Caroline Martin‘s clear round with Islandwood Captain Jack consolidated a great effort for the US, which sees the team take a score of 102.7 into the final phase — and, more pertinently, opens up the narrow margin they had ahead of fourth-placed Sweden yesterday. After dressage, they sat on 99.3 to Sweden’s 100; now, their 102.7 gives them 5.3 penalties, or 13 seconds across the country, over Sweden’s 108. Italy’s three-man team remains fifth, now on a 124 after tipping five rails across their rounds.

Tomorrow’s 3810m course, designed by Alec Lochore, will zig-zag our competitors across Houghton Hall’s parkland for an optimum time of 6:41 — and it’s here that we’ll likely see some significant influence exerted. Houghton’s variable distances are paired with tricky Norfolk ground that runs to the harder side, and we’ll likely see the majority of our field cruise around for time penalties, or join the seven pairs who’ve already withdrawn since the culmination of showjumping.

You can take a closer look at the challenge to come via the CrossCountry App‘s interactive coursewalk, and tune back in tomorrow for a full report and jam-packed image gallery spanning all the action here on EN. Go Eventing!

The team standings following the showjumping phase at Houghton CCIO4*-S.

The individual top ten after showjumping at Houghton.