Two months ago a trip to Germany had never crossed my mind. Then Max, Michelle and I gave up our plane seats to get the Jungs to England, Michael won the Grand Slam, and the rest is definitely part of history.

The response we got for our act was very gratifying and immediate. Aside from the article getting over 70,000 hits, Michael shared it and thanked us on Facebook, they invited us to their farm if ever we were in Germany, a German magazine picked up the story, and the press officer of Luhmühlen sent me a message. She had heard about what we had done and wanted to thank us for giving Michael a chance to win, which he later did, and Luhmühlen wanted to give us tickets to their event if we chose to attend. 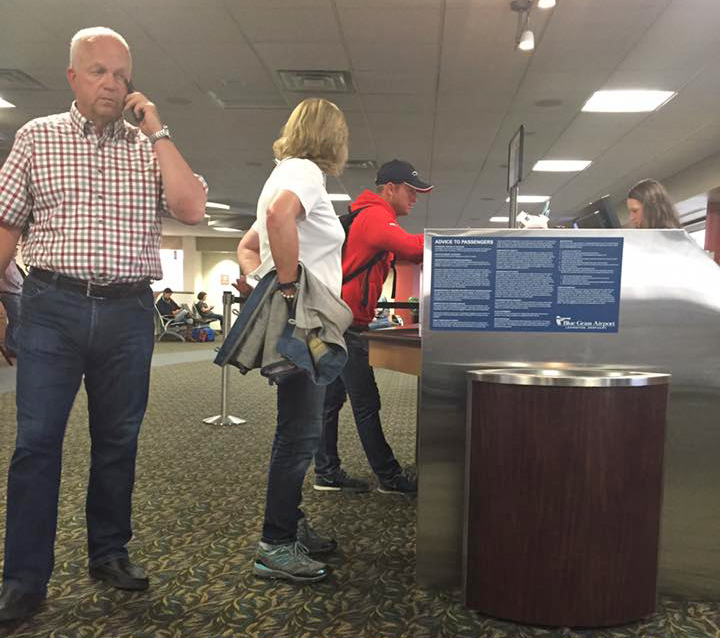 “Just did our good deed of the decade & gave up our seats to Michael Jung & his parents so they can get to London & make it to Badminton after United oversold their flight.” Photo courtesy of Asia Vedder.

A week after Badminton we also received a letter from the German Equestrian Federation, acknowledging the role we played in getting Michael to Badminton with enough time to adequately prepare and thanking us for what we did and our “very special example of sportsmanship” and inviting us to the Bunderschampionate and Annual Champions Gala, both held at the training center in Warendorf.

Max and Michelle were not going to be able to travel to Germany this year, and I was bemoaning the lack of a travel partner to my housemate Liza Horan, and how I wasn’t sure I was going to be able to take advantage of such a wonderful opportunity. She raised her hand and said, “Uhm, I’ll go with you!” Liza is the owner of Baystreet Equestrian LLC, a sales agent, and she had some clients looking for horses she could shop for. I sent an email off to the Jungs, asking to visit the farm and we were set for a week in Germany.

Upon arriving in Hamburg we grabbed our rental car and headed out to look at some horses. The next morning we were off to Liza’s long time business partner Elmar Lesch of Top Eventers, in Bavendorf, to check out a few more prospects and then we headed over to Luhmühlen for an afternoon of dressage.

Liza was working student with the O’Connors years ago and she got a message from Karen while we were sitting in the sponsor tent spectating and catching up with Rebecca Howard, who was competing in the CIC3*. Karen had just flown into town, was going to be around for the weekend and asked if we wanted to meet up for dinner.

We headed over to her hotel, which is also where many of the riders were staying. Karen is a wonderful person to spend time at an event with because she knows Everyone! Erik Duvander, Chef Equip of the NZ team dropped by for drinks, Boyd popped by with Nox, and Tim and Jonelle Price stopped on their way by.

The whole weekend followed a similar vein as Karen, Liza and I watched cross country and show jumping, Karen continued to introduce us to people I had only read about, and she imparted all sorts of wisdom and observations. This ranged from how to build relationships with owners, picking out horses, responsibility and regrets and of course comments on rides and horses we saw. I was gratified to find that we did not disagree on any horses and rounds that we liked or disliked, or why. 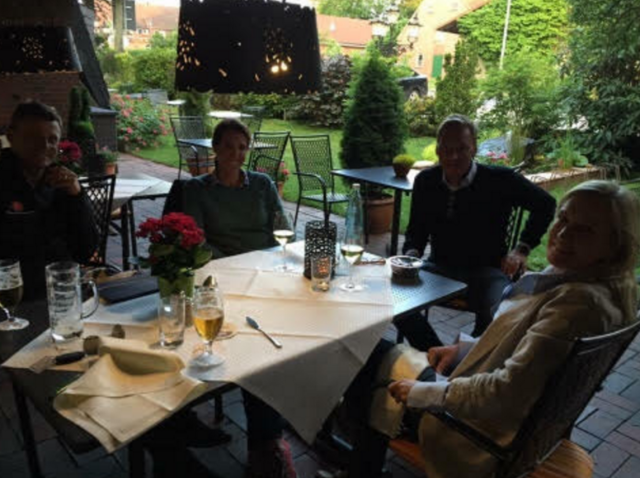 While lunching in the members’ tent on Saturday, Rosemary Barlow, owner of Andrew Nicholson’s horse Qwanza, stopped in. She was a bundle of nerves as this was his first four-star back since breaking his neck. She laughed and said that everyone was nervous but Andrew — he was an oasis of calm.

On her way out she introduced us to Luis Alvarez, current show jumping coach for the NZ team and a man who has the distinction of competing in both eventing and show jumping in the 1992 Olympics, and we sat and watched some of the cross country with him.

Sunday, after the conclusion of showjumping we were off to look at more horses, then one final dinner with Karen and the Martin family, and Monday we were headed south, getting a tour of the country on our way to look at another horse.

Tuesday we were set to go to the Jungs’ farm, and as we drove further south on Monday afternoon we detoured off to check out some beautiful watchtowers we kept seeing scattered throughout the countryside. We decided that we had had enough driving for the day and I did a quick search on line and found a very cute bed and breakfast in Old Town Heppenheim.

Tuesday we headed even further south to Horb, and Reitschule Jung. Michael right there to greet us, and upon my congratulating him on the Grand Slam his immediate response was “without you, it would not have been possible.” It was extremely gratifying how greatly he attributed our help to giving him the time to get Sam properly prepared. He proceeded to show us around the farm and answer any question we could possible think of, with absolute frankness and thoughtfulness, and a complete absence of any arrogance.

His parents also stopped in and we all sat for coffee and bounced from topic to topic, and a nicer, more genuine family would be hard to find. Michael invited us to watch some lessons, one of which was taught in English as the rider is Italian. When asked if he ever did clinics, he said no, but anyone was welcome to come ride there. 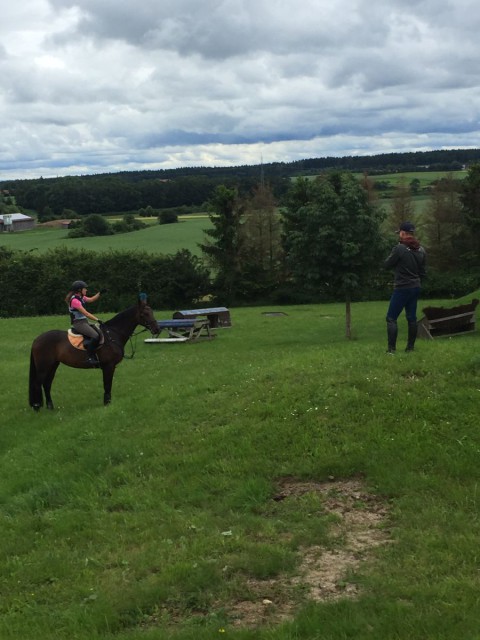 We went out to visit the equine stars of the farm, Rocana and Sam, who were hanging out in paddocks next to each other, with worn fly masks, bell boots and nothing else. Rocana was set to leave for Strzegom that evening and the shiny horse trotting around the dressage ring was a far cry from the mud-crusted creature who happily wandered up to us in the field.

While visiting Sam I asked Michael if he always knew he was special. Michael laughed and said that at the two-star level Sam was so bad at the dressage that they almost sold him, but reconsidered because he was so good jumping. Just think of how different his path would be if they had sold the Grand Sam! 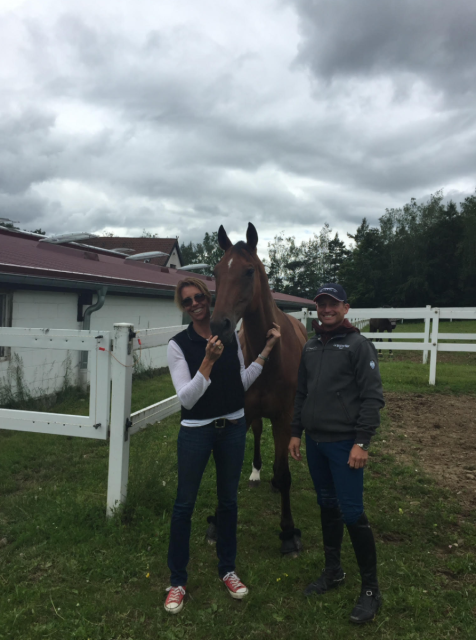 Asia, The Grand Sam and The Terminator. Photo courtesy of Asia Vedder. 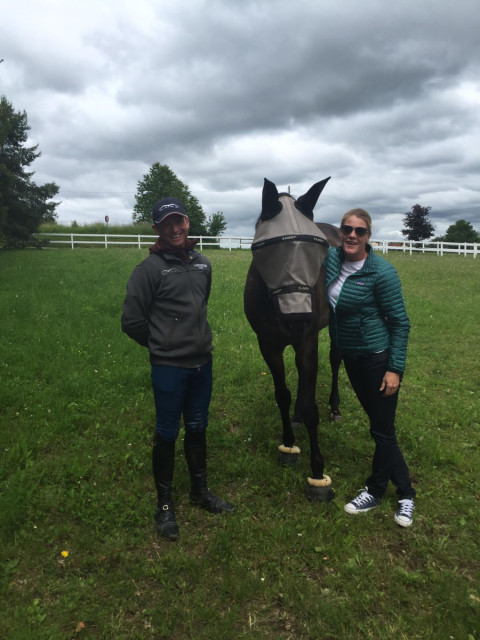 One of the most surprising thing about our visit is how involved in the everyday minutia of the barn Michael is. Throughout our time there people came up to ask questions about where to turn horses out, tack, and at one point he had to go consult with the farrier. You definitely get the feeling that rather than just riding, he knows everything that goes on with all the horses. 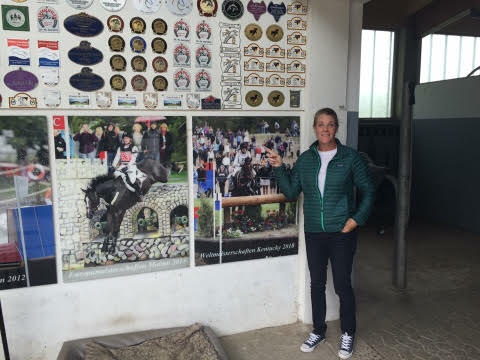 After a wonderful three hours, Liza and I reluctantly took our leave, and received warm hugs from all. Brigitte made sure to say thank you again and to please pass their gratitude on to Max and Michelle.

We headed down to Stuttgart where we were flying out and spent the evening marveling over all we had seen and experienced. Wednesday we were back in Santa Barbara, tired and jet lagged, but inspired from the trip. It was definitely a trip of a lifetime and an experience that I will cherish, all brought about by an overbooked flight!