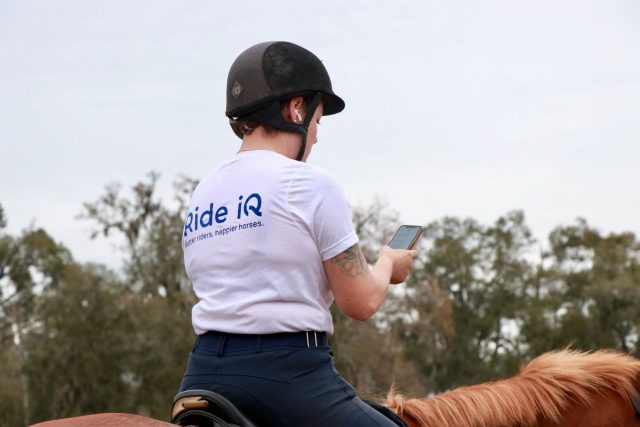 Jessa, 32, and Kinsey Lux, 28, are sisters. They grew up in Minnesota but spent most of their high school years in Ocala, FL riding and being coached by Kyle and Jennifer Carter; Kinsey even transferred to an online high school to live next door to the Carters. Jessa and Kinsey both competed to the 2* level before going to college, which marked a big transition: they sold their horses and pursued careers unrelated to equestrian sports. Jessa landed in Denver and Kinsey in New York City.

Kinsey worked for five years at Blackstone, a large hedge fund in New York City, on a real estate trading desk. Jessa was most recently the Community Manager for a digital design agency in Denver, and prior to that was a Marketing Director at a commercial real estate company for five years, and a website designer for a tech company.

In January of 2021, when the Covid-19 pandemic turned the world on its head, Jessa and Kinsey scratched an itch — the itch to discover a business opportunity within equestrian sports. Their experience working in the business world drove home an understanding that the best business ideas do two things: address consumers’ needs and add value to consumers’ lives.

They knew from experience where shortcomings existed in riders’ experiences, but they needed to hear from others to understand where to focus. So they talked with countless riders, the vast majority of whom they didn’t know. They’d have one phone conversation and end the call by asking who they should talk to next. A lot of “shortcomings” surfaced through those discussions, but the ones they felt most excited to address were the shortcomings that exist around independent riding.

One of the shortcomings of riding alone is that it can be hard to feel motivated and make progress. Whether you’re mindlessly riding in circles or finding yourself frustrated by something you don’t know how to solve, there’s definite room for improvement in independent riding. I find this to be true myself: my horses always go better when I am riding them in a lesson, whether it’s on the flat or over fences.

According to Jessa and Kinsey, people ride alone 80% of the time; some riders are lucky to work with an in-person coach once a week, and some once a month or even less frequently. Riding lessons are expensive, time-consuming, and often require travel to a coach’s facility. Jessa and Kinsey identified the lack of quality, consistent coaching as a major issue for many riders.

Their conviction was that riders were ready for this status quo to be disrupted.

How to address the opportunity came quickly after that: people need quality guidance while they ride and they need to be able to afford it as often as they want. These are simply boxes that FaceTime lessons and educational videos can’t simultaneously check. Jessa and Kinsey decided that the best way to address these needs was with on-demand audio lessons taught by top coaches. Like Nike Run Club for runners or Headspace for meditators, this solution allows riders to get guidance while performing an activity.

From here, the plan for what is now known as Ride iQ formed: to create a lesson, they would have a coach record themselves while riding a horse. The coach would explain what they were doing while riding (i.e. “to create bend around this circle, I am closing my inside leg at the girth and keeping my outside rein steady, while keeping my eyes up and looking around the circle”). This audio file would then be uploaded to an app, where Ride iQ subscribers could click “play” as they started riding their own horse and follow the patterns and directions of the coaches. The idea was simple, and they hoped that it would work.

At this point, Jessa and Kinsey called the Carters out of the blue. Having been students of the Carters growing up, Jessa and Kinsey knew they wanted Jen and Kyle to be on their team as they worked on building this business. Jessa and Kinsey went to Florida, where Kyle, Jennifer, Leslie Law, and Jon Holling were the first coaches to record lessons so the concept could be tested.

Fortunately, Jessa and Kinsey’s initial discovery calls had left them with lots of contacts who were willing to help at this stage, and 50 of those people (all ages, locations, disciplines, and levels) agreed to be official test riders. Jessa and Kinsey sent the beta version of the app and lessons to this group, and over the course of eight months they adjusted the product according to feedback, built an app, and recruited more coaches across both eventing and dressage. 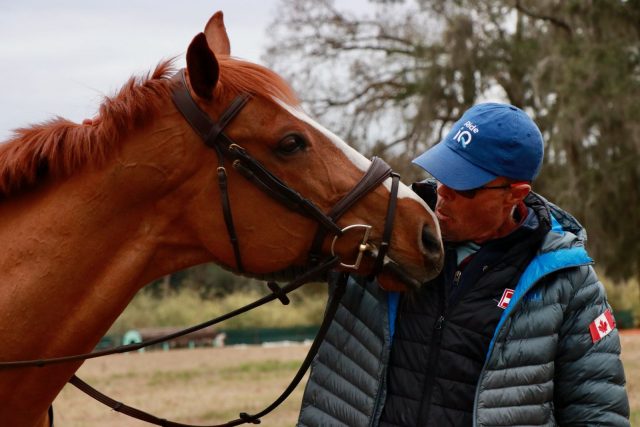 Ride iQ was founded on the principles of loving the horse, and that better-educated riders make better horse people. Photo by Sally Spickard.

It was in the early summer of 2021 that Jessa and Kinsey approached me and asked me to be a coach on their app. I was intrigued; this sounded like one of the exciting ideas that my smartest friends in undergrad would have come up with for a startup. I was also struggling, as all of us were, to create a new normal in the pandemic. I jumped at the opportunity to record lessons for them. I have done recordings on all of my horses, from my 5* partner Bendigo to my young horses.

Ride iQ officially launched on August 17, 2021. Although test riders were enjoying and frequently using the app up to this point, there was much to learn during the earliest days after launch.

Were riders ready to embrace a new way of doing things? Would they embrace a brand-new concept and the use of technology in day-to-day rides? After launch, all the signs pointed to “yes!” — the equestrian market was eager to adopt a tool that made riding alone better. Ride iQ exceeded its first month’s membership goals within the first few days, and the Ride iQ community has continued to surpass expectations over the past 16 months.

Since its inception, Ride iQ:

But the most important highlight, Jess and Kinsey tell me, is that they continue to hear from members every day about how Ride iQ has positively impacted their riding, their relationship with their horse, their enjoyment of the sport, and their connection to others.

The impact piece is incredibly important to the Ride iQ coaches, too — it’s special to them that Ride iQ is a way they can help a lot more people. Members made a year end video for them at the close of 2022 to express their gratitude.

Some things to look forward to in 2023 for Ride iQ include:

How can you try out Ride iQ? The best and easiest way is to download the app in the app store on iPhone or Android and start a two-week free trial. You can cancel anytime and still have access for the full two weeks, and you can have access to all 400+ lessons. The other perk of starting the free trial is getting full access to membership perks beyond the lessons: you will be invited to join the private Facebook group with members and coaches, be invited to a live Ask An Expert event every week, and get access to all of Ride iQ’s exclusive podcasts (like Hack Chats and Conversations with Coaches).

Alternatively, those interested in Ride iQ can search “Ride iQ, A Preview” on Spotify, Apple Podcasts, or any podcast platform – there, you can choose from a handful of full-length lessons plus a couple of examples of full-length Ride iQ podcast episodes.