When it was announced that the eventing portion of the Adequan/FEI North American Junior & Young Rider Championships would be held at Rebecca Farm in Kalispell, Montana, riders were thrilled to get the chance to compete at one of the most scenic venues in the country.

In the months leading up to the Event at Rebecca Farm and the coinciding NAJRYC, young riders and their friends, families and coordinators from eight USEA areas and Ontario have been hard at work across the country to secure the funds needed to send their teams of talented youth to this pinnacle event. 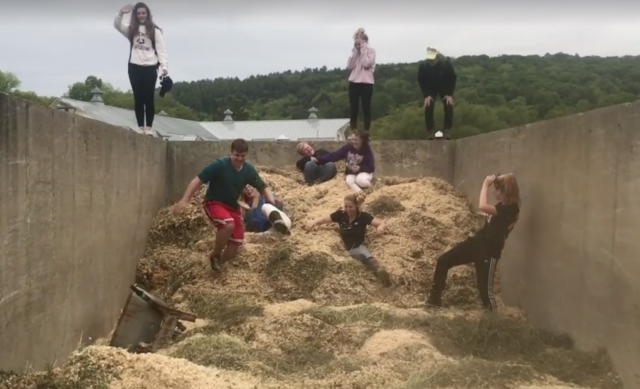 Area I “Mega Muckers” celebrate a successful day with a jump into the muck pit at GMHA. Photo by Deb Meek.

Area I set a goal of raising $50,000 to send seven riders and eight horses out west to compete this year. In addition to fundraising, the young riders and their families and friends also campaigned throughout the area to promote their programs by holding bake sales and giving away carrots and peppermints at local schooling shows and early season sanctioned events.

“The candidates and their families gave from their hearts,” Margaret Potorski, Area 1 Parent Volunteer and Fundraising Coordinator, said.

A strong showing of support from the New England eventing community helped the Young Riders exceed their ambitious fundraising target, raising enough not only to help fund the trip to NAJYRC this year, but to contribute to the area’s other Young Rider programs and leave a starter fund for next year. Support from additional members of the Area 1 community, especially Carol Mayo, George Cheney and Brenda Jarrell, were also pivotal, Young Rider Program Coordinator Deb Meek explained.

At two very popular events, the GMHA Spring and Groton House Farm horse trials, the young riders provided a stall cleaning service and stripped more than 60 stalls at the conclusion of each event.

At Groton House, which served as the fundraising finale, the young riders also held a silent auction with items generously donated by local businesses, members of the eventing community, and friends and family of the riders. The young riders also hosted a Barnyard BBQ, a meet-and-greet event with the NAJYRC candidates attended by nearly 100 people, all of whom were treated to good food and fun lawn games. 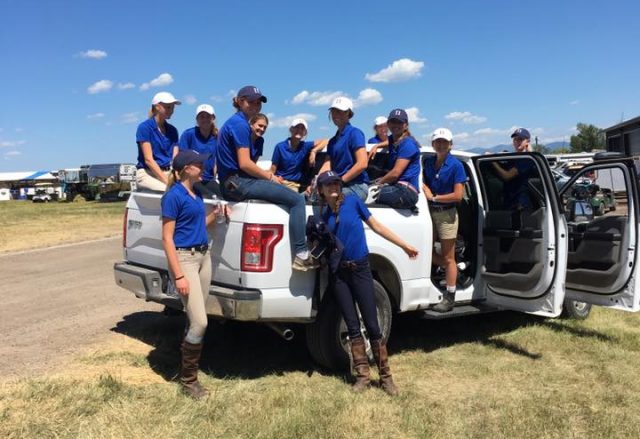 How many Young Riders can you fit into a pickup truck? Photo via Mary Dembosky‎ on Facebook.

“Area II is a large area with lots of eventing, and you might think it’s easy to fundraise here, but actually there are so many upper-level riders, all of whom either have major and minor sponsors and are constantly gaining new sponsorships and support from equestrian businesses, so there is quite a bit of competition for any supporting dollars for eventing here,” Holly Covey, a member of the fundraising committee, said.

“Most of our contributors give generously all year round to many other 501(c)3 charities in this very competition-rich region, so we are challenged to make sure young riders are included.”

Throughout the spring the entire Area II community banded together to hold an online silent auction of more than 60 items from generous donors, including the young riders and their families, upper-level riders and local businesses.

“It really takes a village to get these talented young riders to NAJYRC,” said Kimberly Horn, the fundraising committee chair, “and many of the young riders themselves also held their own fundraisers and clinics as well as solicited donations from local businesses.”

A benefit night held at Waredaca Brewing in June served as the grand fundraising finale where the team selection was announced. Details were also unveiled about one more extraordinary auction item — a seven-night horseback safari in Botswana — coordinated by Carolyn Tett, whose daughter, Alexandra Tett, is a one-star team member for Area II. Jay and Kris Ennis, longtime supporters of eventing in Area II, won the trip.

“We’ve plugged away all year, working together on all the donations by email communication, to find the best way to use them for the kids’ benefit,” Holly said. “We bounce ideas off each other and never say no to a donation, finding a way to leverage each one — from the smallest, a pair of tiny cubic zirconia earrings, to a large cross country jump!” 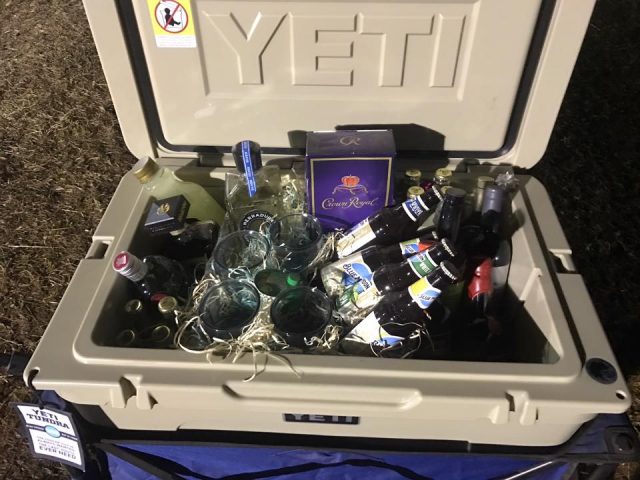 More than $10,000 was raised through an online silent auction coordinated and managed by Lisa Shurtz, even after her own daughter’s NAJYRC quest was cut short due to injury. 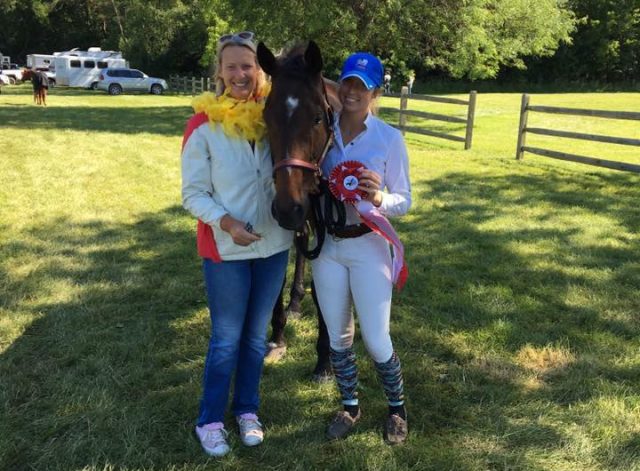 Area IV is being represented by two riders, both competing in the two-star. They will be placed on a team along with the sole Area I two-star rider.

At the Inaugural Area IV Young Rider’s Trainer Challenge at the Fox River Valley Pony Club HT, attendees cast a vote for for the trainer they wanted to see wear a funny outfit by placing cash donations in the container associated with that trainer. Jennifer Rousseau, whose daughter Melanie is competing at NAJYRC, won the honor of donning of a yellow fellow boa by having the most cash in her container at the end of the contest.

Area IV Chairperson Kathy Kerns also offered to donate $25 to the Young Rider Program for each young rider who volunteered to scribe or assist with timing and help put away jumps at the Mid-America Combined Training Association schooling shows this year, supporting both the local schooling show organization and the Young Rider Program at the same time. 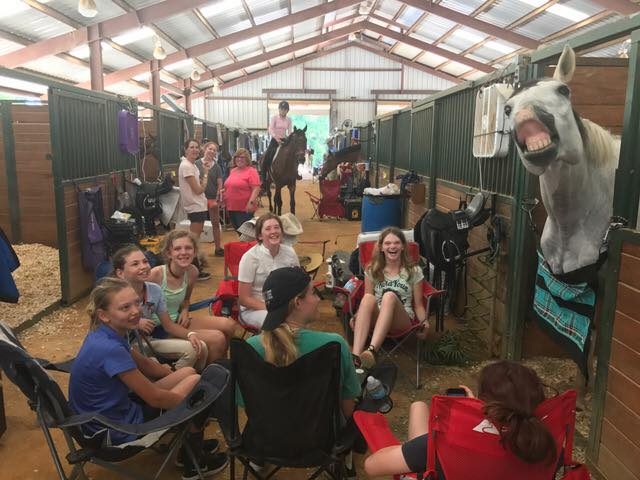 For Tayler Owen, the Area V Young Rider Coordinator, it was important to focus on having the rider’s earn the money they raised to send their six combinations to Montana, rather than soliciting in-kind donations.

“It gave these kids the opportunity to meet others in our area as well as allowed some of the adult riders to meet these kids and see where their financial support was going,” she said. “I am a firm believer that you need to work for things to build appreciation rather than have things just be given to you. I know more people are willing to give financial support or donations when they see these kids work for it.”

Tayler made a point to have a fundraiser set up at each of the early-season events. At one show, the riders set up a tack-cleaning service and asked for donations in exchange for dropping off tack to be cleaned. As the riders had time in their schedule at the event, they would drop by the booth to clean tack.

Other events offered braiding and stall-stripping services, which eventually became so popular that some competitors interested in the service had to be turned down because there weren’t enough hands on deck to meet the demand.

“It let them see that I was with them in this journey helping lead and support them, rather then sitting back and watching them do the work,” Tayler said. “It gave me an opportunity to really get to know some of these kids as well as them to get to know me better.” 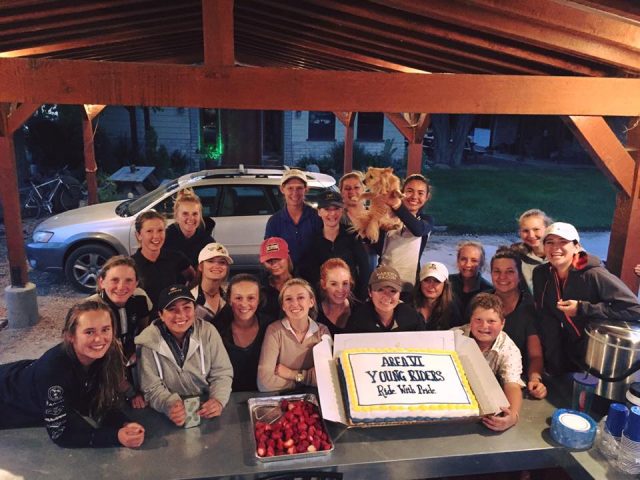 What better way to cap off a great time at Younger Rider camp than with cake? Photo via Area 6 Young Riders on Facebook.

Eight Area VI horses and riders made the trip from California, with six in the one-star and two in the two-star, thanks to an extensive online auction that benefitted many of the area’s rider programs. 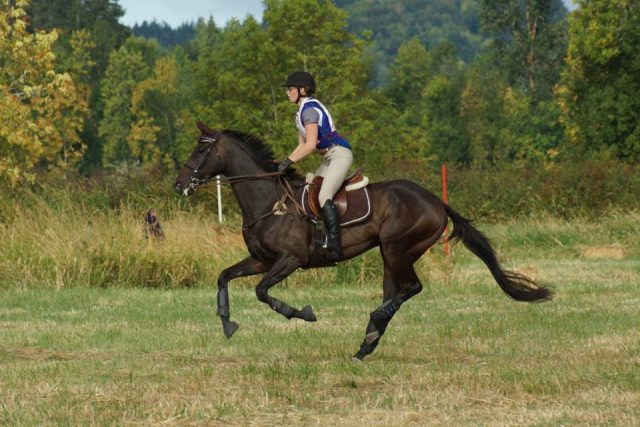 Unique to the nation, Area VII holds a sanctioned horse trials annually to benefit the area’s young riders. This year the benefit horse trials raised the funds to send three horses and riders to compete as a team in the two-star.

Run for 30 years and currently held at Lincoln Creek Farms in Centralia, Washington, the benefit horse trials offers Starter through Preliminary levels. Because the event is a fundraiser for the Young Area VII Rider Program, the young riders themselves are particularly encouraged to volunteer and support the event. 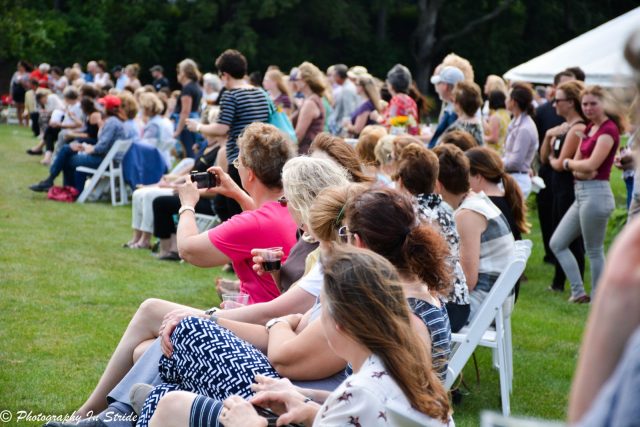 A sold-out crowd enjoys ‘An Evening of Beautiful Horses’. Photo courtesy of Miranda Atkins/Photography In Stride.

“The riding was a wonderful showcase of the equestrian talent in northeast Ohio,” Jeni Gaffney said. “The eventers had fun going cross country to rock music.”

Brooke Burchianti, who is competing on the one-star team for Area VIII, served as one of the exhibition riders. Area VIII has four combinations in the one-star and one in the two-star. 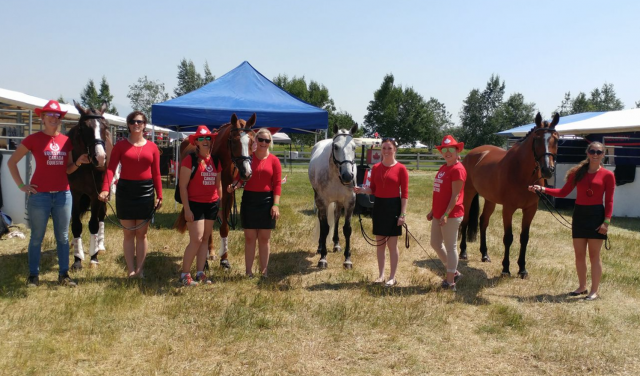 They made it! The Ontario 2* riders celebrate after the trot-up. Photo by Lisa Thompson.

The Ontario Horse Trials Association (OHTA) initially announced it would not be sending a team to NAJYRC this year due to the distance and cost to get to Montana. Despite this declaration, a determined pack of young riders banded together to make their dreams of representing Canada at NAJYRC a reality. An impressive eight riders — four one-star and four two-star — have made the journey to Rebecca Farm.

Among the fundraisers OHTA organized were two that proved particularly fruitful. An online silent auction, with a website built by a team member and all donations solicited by team members, touted an assortment of generously donated prizes, including a helicopter ride and lessons with Nationally Certified coaches. OHTA also hosted show jump schooling days at venues in both Florida and Ontario to raise funds.

“As a team, the young riders were very active and focused on raising the funds they needed to get their horses from Ontario to Montana for NAJYRC,” Helen Richardson, OHTA’s Young Rider Program Coordinator, said.

Helen credits the young ladies on the team with doing all the hard work to raise the funds for their big trip. EN salutes all the young riders who worked hard to both qualify to compete and fund their trip to NAJYRC. Go Eventing.