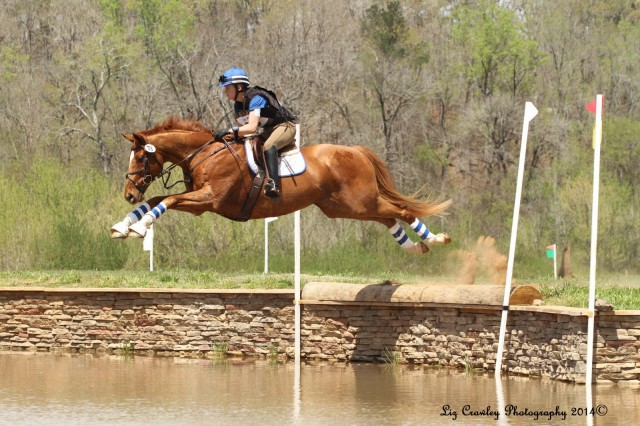 Julie Pate and Catch Me If You Can at Chattahoochee Hills H.T., April 2014. Photo by Eileen Dimond of Liz Crawley Photography.

Julie Pate and her OTTB, Catch Me If You Can, made a splash at Chattahoochee Hills last weekend when they took a by-all-accounts spectacular flier into the Training water. Photographer Eileen Dimond of Liz Crawley Photography captured the moment on film and kindly shared it with Eventing Nation.

Julie, of Knoxvillle, Tenn., explains that “Bosco” has quite the personality. Around the barn he’s known as the Red Dragon or the Red Terrorist for his propensity for getting into trouble. “We always say that he makes bad choices,” Julie says. “Every day he has four shoes and no blood is a gift from God.”

Under saddle, she says, Bosco is a people-pleaser who always gives 120 percent but he tends to be a little melodramatic. “He is such a big goofball. He spooks at the dumbest things. He hates lines in the sand in a newly drug arena. He hates changes of colors of grass — ah, scary! And he leaps in the air when he steps in a squishy spot. He is the scared-iest brave event horse ever!”

Julie and Bosco dominated the USEA Novice Adult Amateur Leaderboard for much of 2013 with three wins, a second and another second at their move-up Training level event. On the cross-country course, Julie says, “Bosco is a cocky punk. Super brave, scopey and powerful, but he always thinks he knows best.”

The pair has a difference of opinion when it comes to drop jumps, however. “I have always hated drops. They feel unnatural! But Bosco could care less,” Julie explains. His bold leaps into space haven’t helped Julie’s confidence: She lost a stirrup when he took a big one at their first Training at Jump Start H.T., then they had their first cross-country stop ever at Poplar Place in February when they came to the drop (“probably a little too fast,” says Julie) and it caught him off guard. He popped off it nicely on the second go, but when Julie saw the water on the Chatt Hills course she knew she needed to give it a smart ride.

The rest of the story, in her own words: “Walking the course I was thinking, ‘If we can just get into the water, we will be golden.’ I knew it was hard to see the water until we were right up close, and since we were way ahead on time, I planned on trotting a few steps to give him a few extra seconds to see what was in front of him. Over Bosco’s dead body! He refused to trot (it’s like pulling on a concrete wall). At the moment of truth, I forgot all of my training and closed my leg and instead of slipping my reins and leaning back, I went fetal.

“In hindsight, it probably helped me stay on because I ended up using his neck to push my body back up! Of course, he didn’t even hesitate at the drop. But he did take a flying leap. I think he tried to superman his way across the water complex. You can tell by the pics he never lost his focus. His balance stays up (even with me on his neck) and his ears pricked on his next jump. It all happened so fast, I didn’t really have time to think about it. I just sat up and pointed him at our next jump. It wasn’t until after the finish flags did I think, Wow, I almost came off at the water!”

The photo series confirmed her suspicion, but Julie says the moment just made her heart grow fonder: “I love that horse so much! He has the heart of a lion with the brain of a marble! A shiny marble! With glitter in it.” 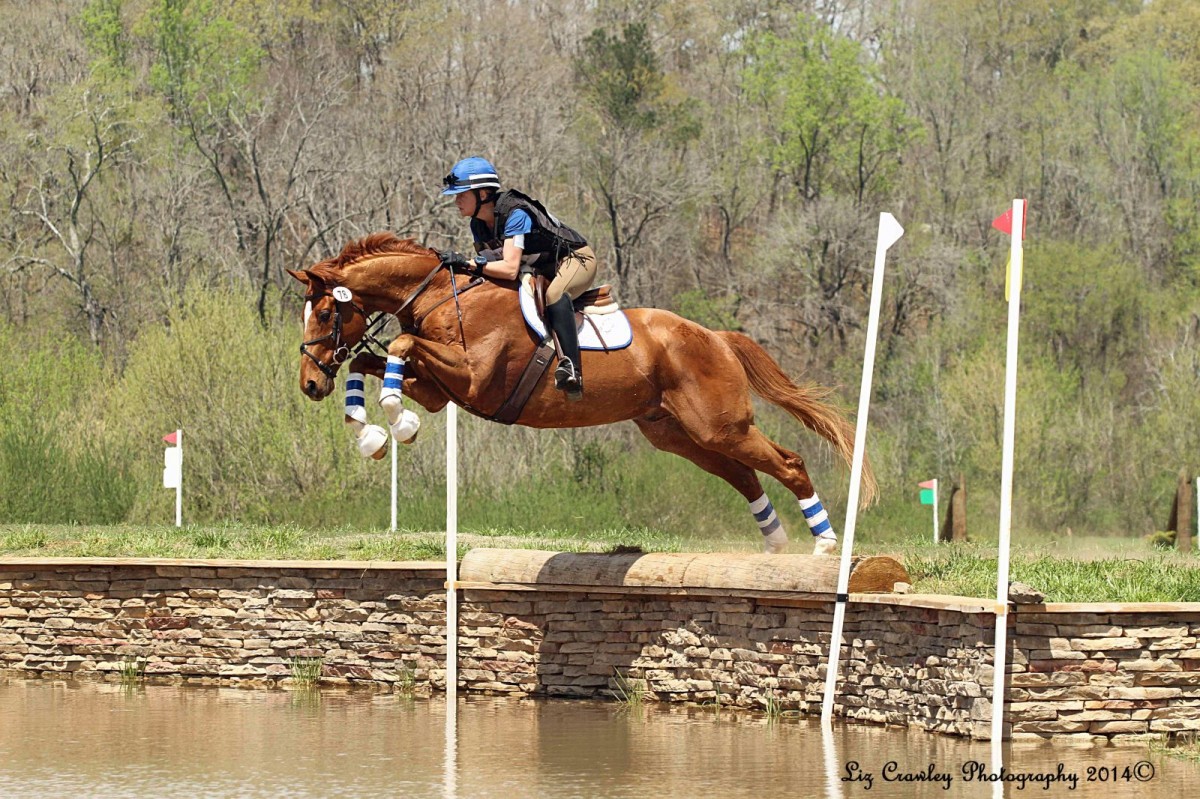 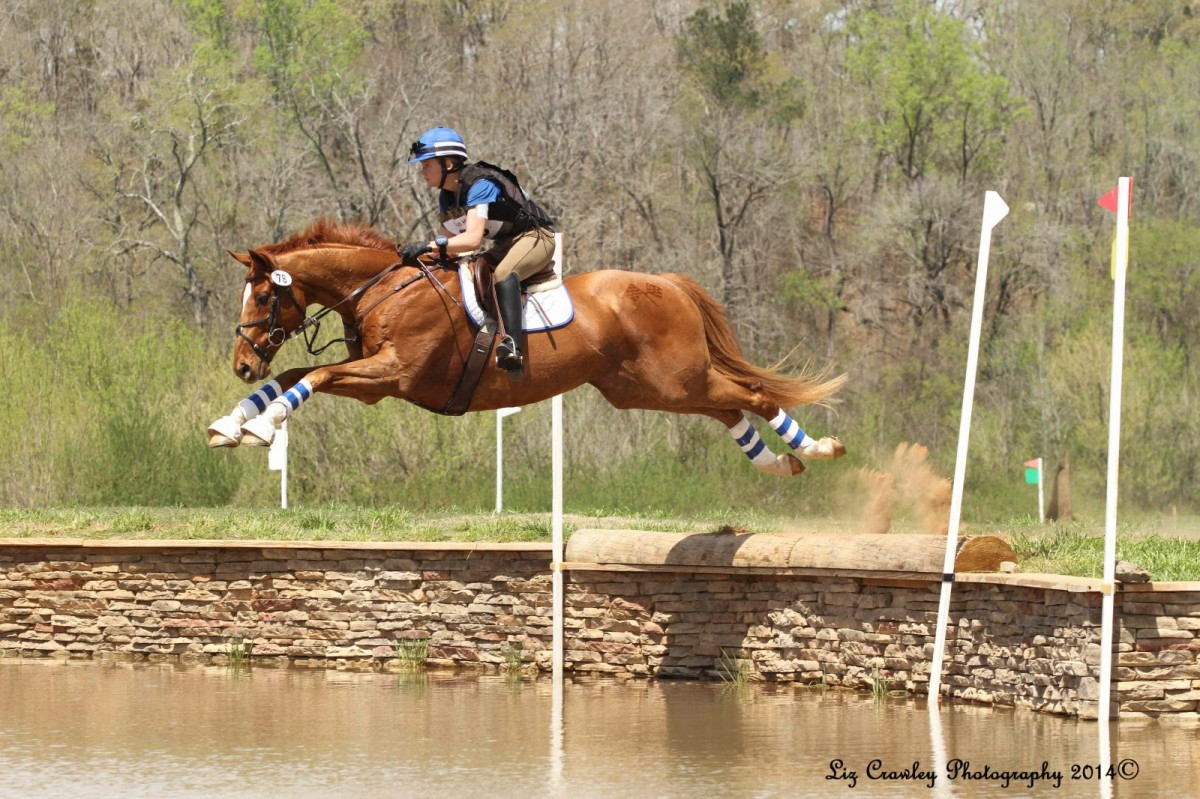 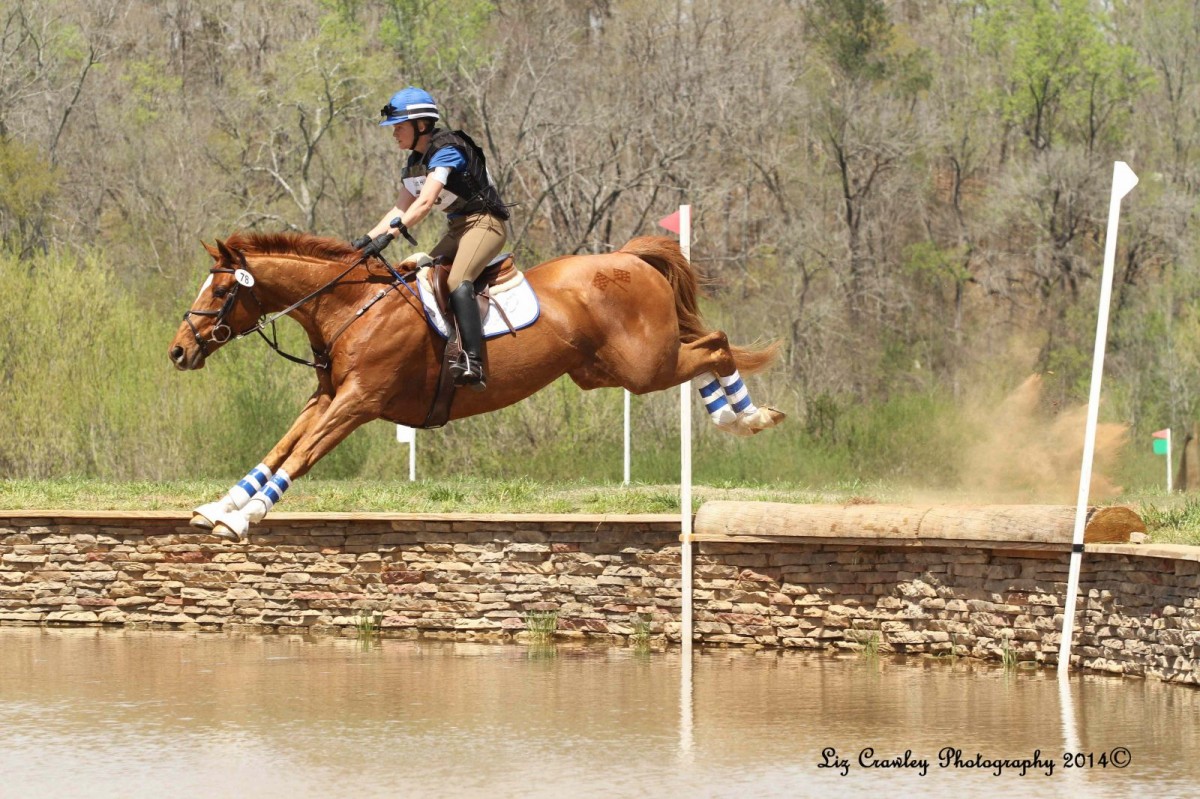 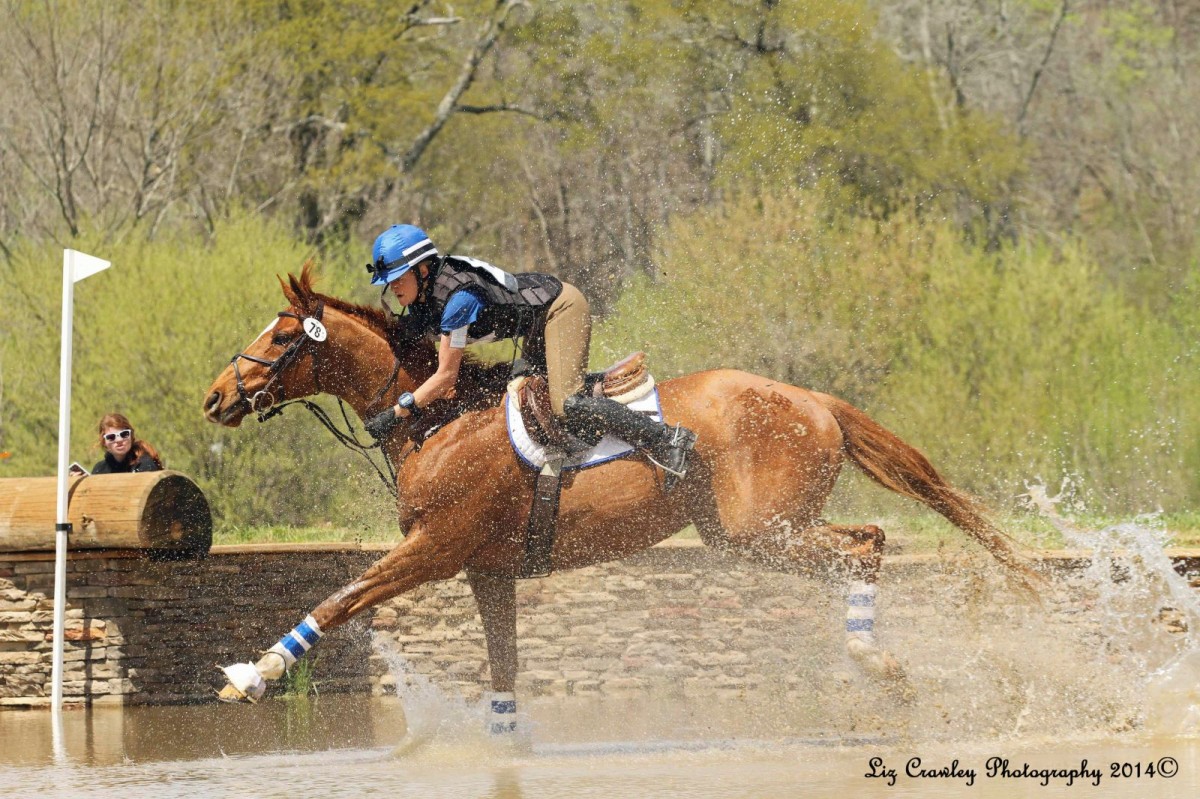 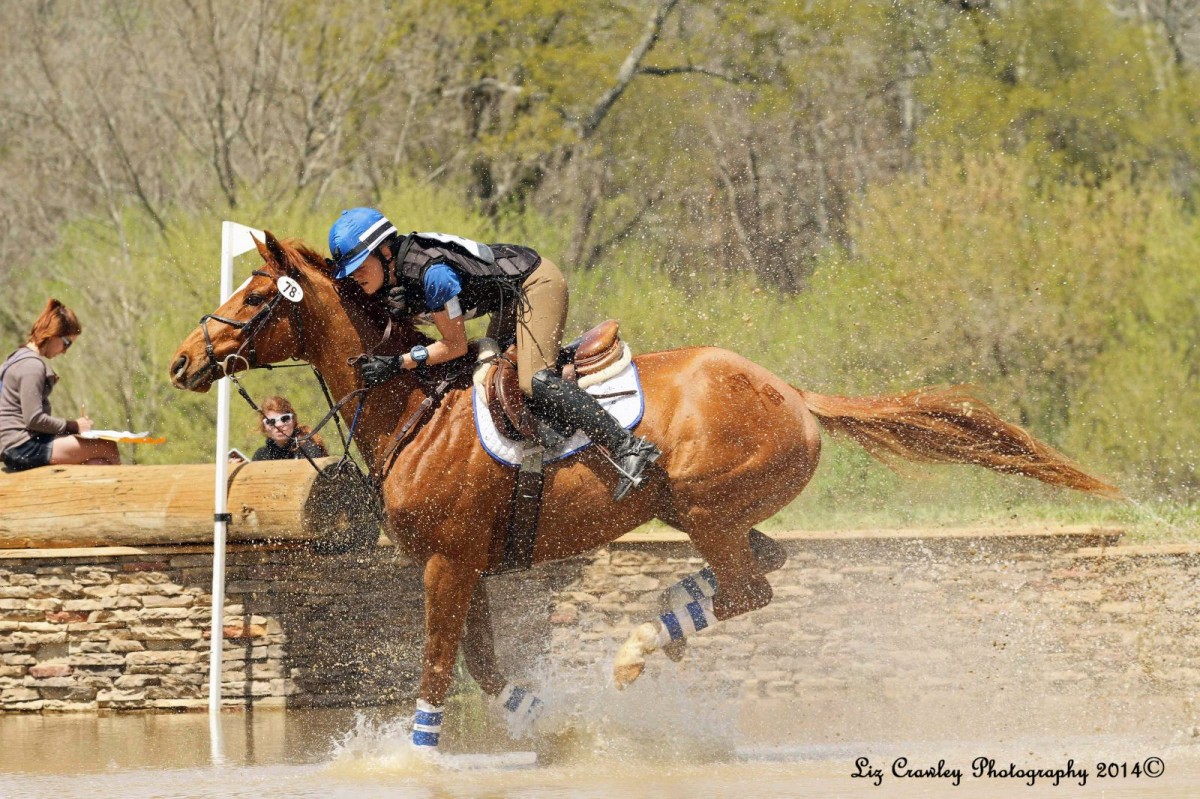 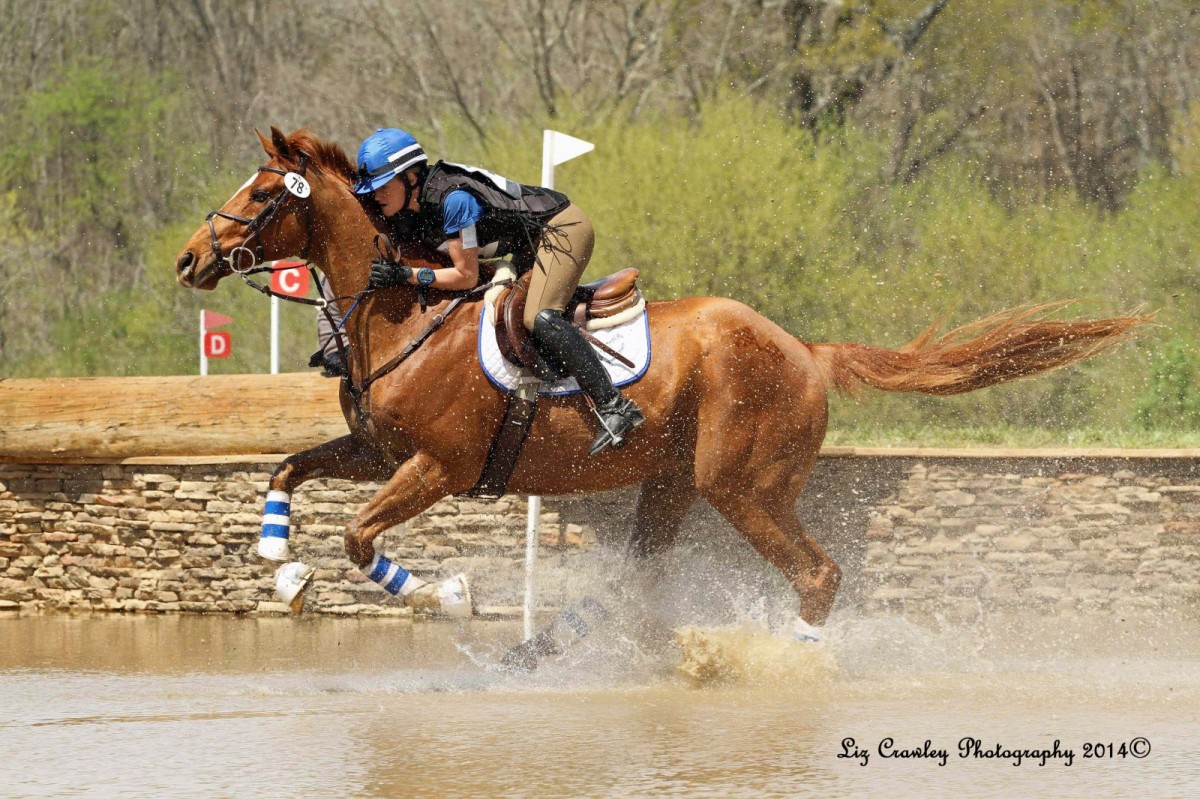 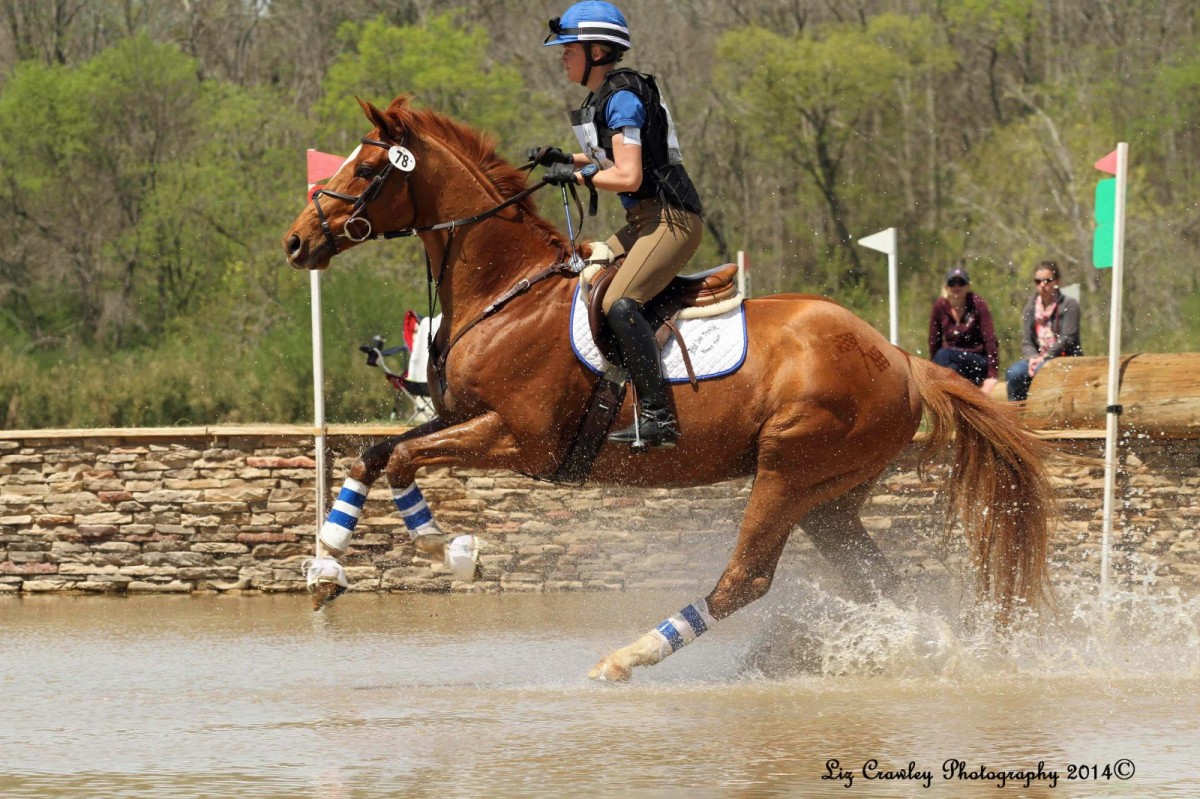 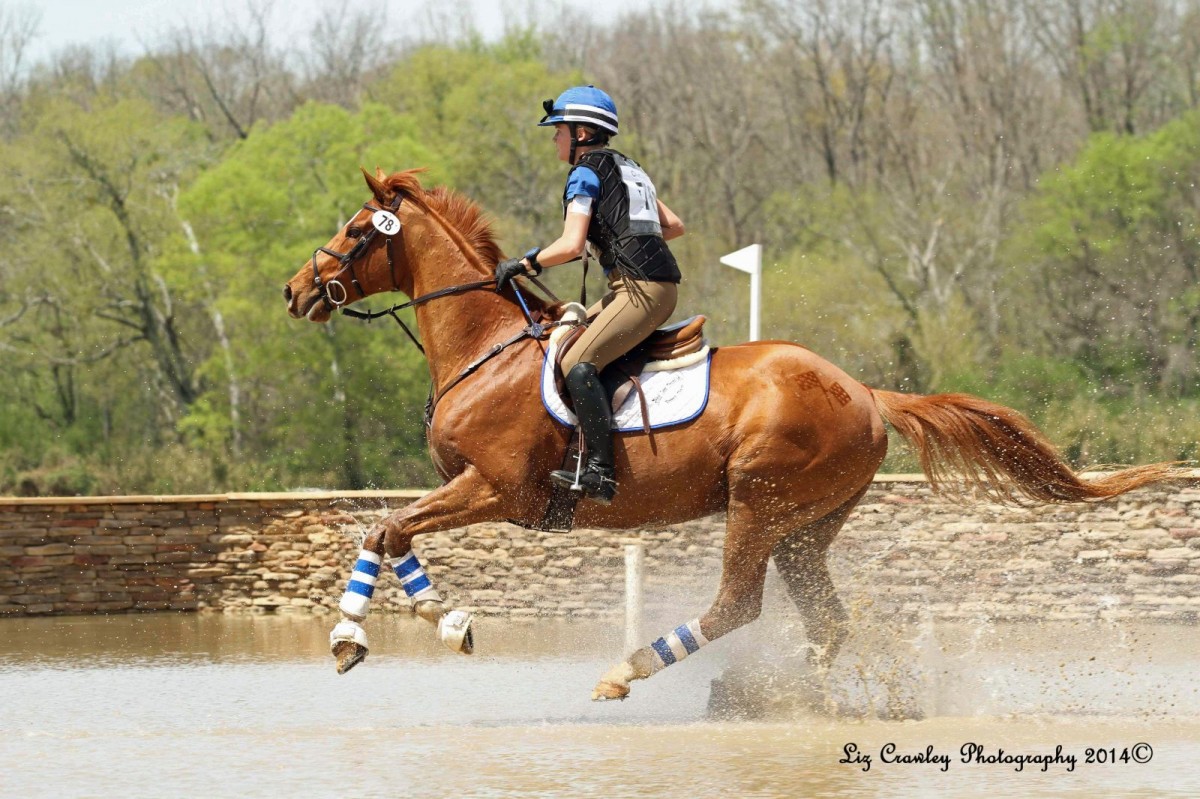 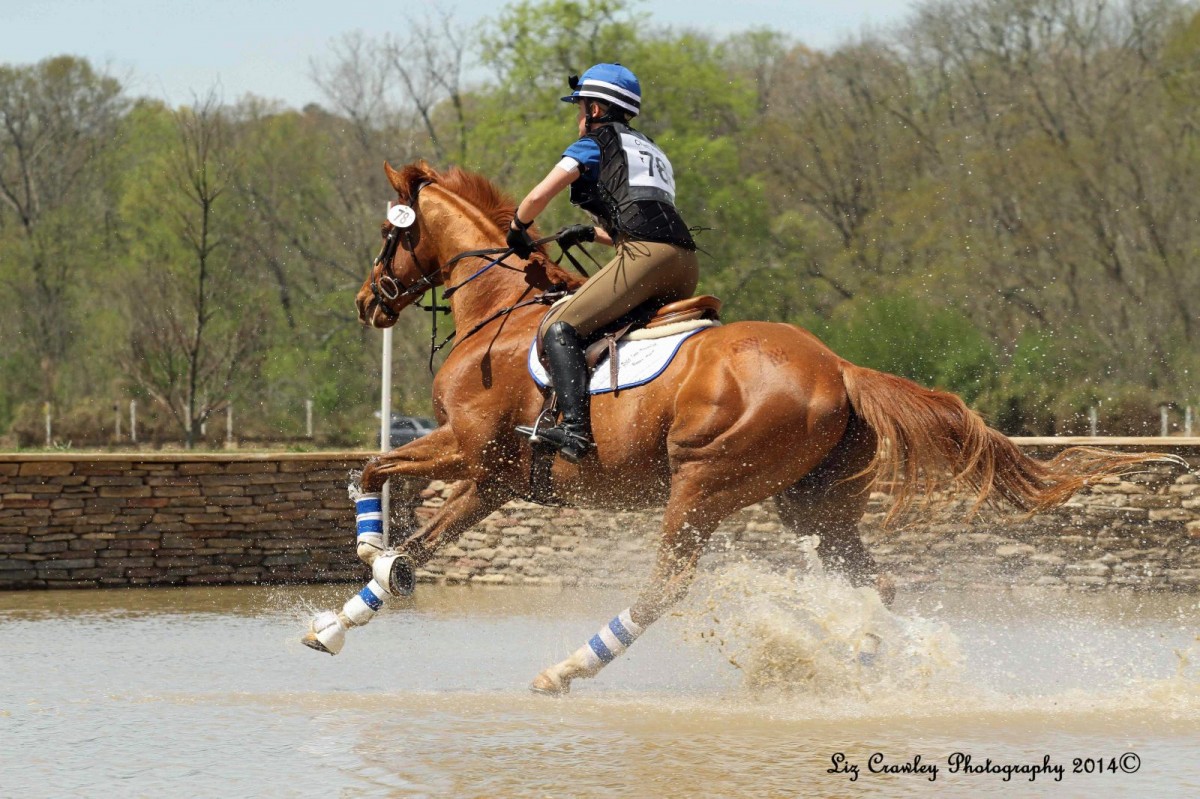 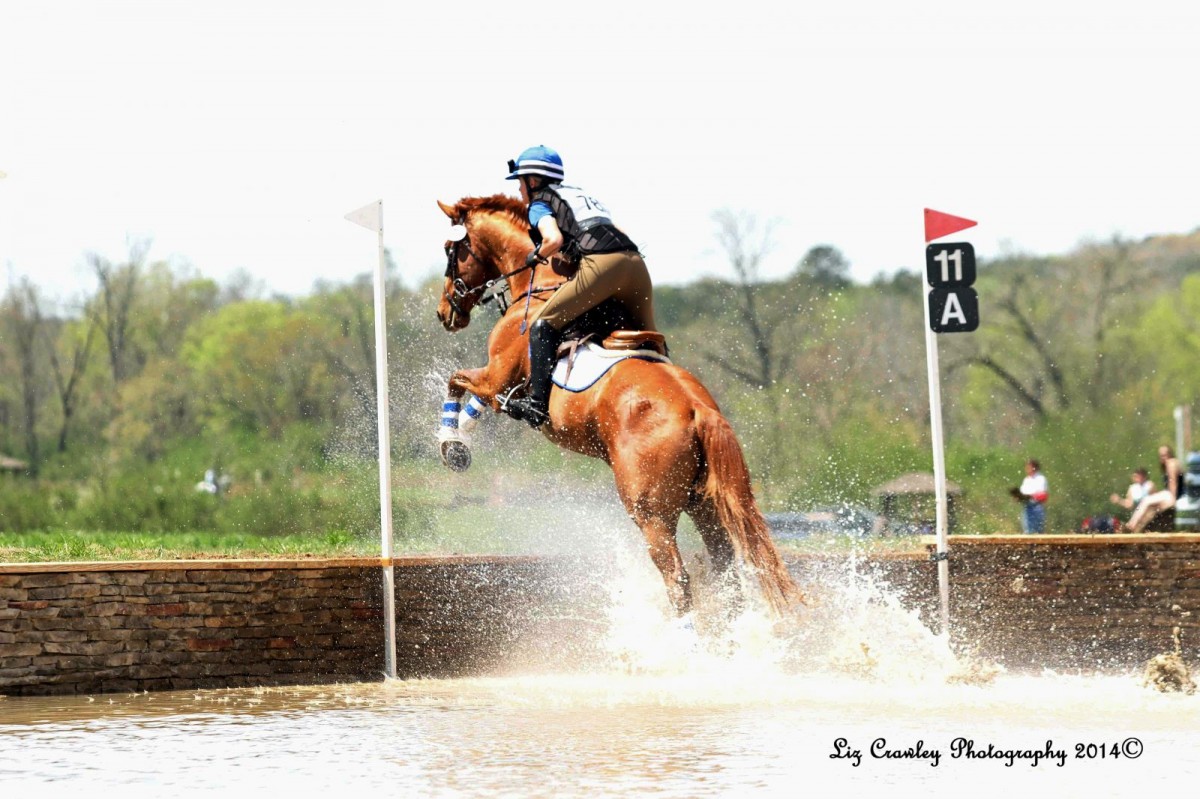 Many thanks to Julie and Liz Crawley Photography for sharing. Go Eventing!