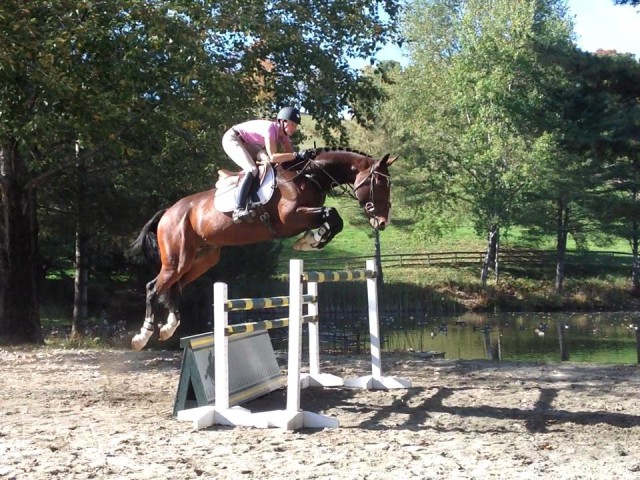 I recently had the privilege of sitting down and listening to a distinguished member of the Special Forces Regiment, Major General Sid Shachnow.  He was the guest speaker for Denny Emerson’s Adult Camp at Tamarack Hill Farm in Southern Pines. What a remarkable individual with a wealth of knowledge and wisdom to share with those lucky enough to be listening.

Sid was born in Lithuania, and at six years old was imprisoned for three years during WWII in a German concentration camp. He immigrated to the U.S. in 1950, and in 1962 he volunteered for Special Forces, which ultimately led to his title as Major General of the Special Forces. He also served as a Green Beret for thirty-two years.

Even though Sid essentially has nothing to do with the sport of eventing, everything he had to say, and every story he shared absolutely shared commonalities with our sport in more ways than I could count.

He spoke of determination and fear, of resilience and leadership, and of confidence. He covered a great deal more, and shared some amazing stories, though one in particular story stood out for me. This might not be word for word, but this is the general gist of the story:

There were two young men about to go through part of the training session, which consisted of climbing a rope. The first man was incredibly agile and powerful, therefore climbing the rope effortlessly. The second man was not as fortunate as the first. This individual started climbing about half way up the rope until he slid down while gathering painful rope burns in-between his fists along the way.

Sid noticed this guy never gave up. He continued and struggled, but never stopped. Sid said the first guy didn’t stand out at all, even though he climbed the rope effortlessly. The second guy, however, was someone who had what it took to be in the Special Forces. He demonstrated commitment, and utter determination, even though he wasn’t the best rope climber in the world.

I absolutely love this story that Sid had to share because when you’re sitting in a room with twenty other die hard and enthusiastic non-professional event riders, perhaps one of those twenty has what it takes and is truly a naturally gifted equestrian, but what about those other nineteen individuals?

What about those riders who are not going to the World Equestrian Games anytime in the near future, but have perseverance, grit, and are unwilling to give up no matter how difficult the lessons?

I like to think I am learning how to become a much better rider all the time. I was not born yesterday. I know I am not the next Michael Jung, or Ingrid Klimke, but that doesn’t mean that there’s not a spot for me in this small eventing community. This does not mean that I throw in the towel because I have to constantly work on and train myself to become more finessed and more able.

Talent can only take you so far in life, the rest boils down to how willing you are to work hard.

Do you mind getting your hands dirty? Does it bother you to start at the bottom and work your way up the rope, even if you slip fifteen thousand times before reaching the top? How badly do you want this life, and what are you willing to sacrifice in order to reach your goals?

Falling down, and feeling the rope slide through your hands may seem like a constant deterrent, but giving up won’t get you anywhere. Focus and fortitude will get you to the top of that rope, no matter how talented, or untalented you are, so never give up and keep on climbing!