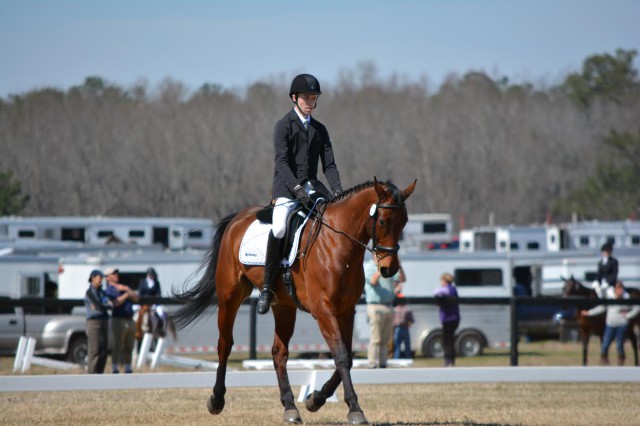 My name is Michael Willham and I am a Nutrena® sponsored rider and member of the Otterbein University Eventing team in Ohio. I got a much later start into the world of horses than many others, I started taking hunter/jumper lessons when I was 11. However, after several years, I got tired of “looking pretty” and started taking some dressage lessons, then dove headfirst into the craziness that we all know and love: eventing.

This was when I got my first horse, a Knabstrupper mare named Elmegaardens Affair.

Knabstruppers are a rare warmblood breed from Denmark known for their spotted coat coloring, but are no relation to the Appaloosa. There are only about 125 or so in the U.S and only about 3,000 worldwide.

“Affair” is an 11 year old, 17.0 hh leopard spotted Knabstrupper mare who ran away with my heart (as well as wearing a couple heart-shaped spots in her coloring!). I evented her for the past three years, starting out as one of those “blind leading the blind” situations; as I was still a green rider, and she was only under saddle for about 2 years.

Affair and I have had our ups and downs, but this past 2014 season we really clicked and figured everything out. We competed in six events, never placing below third place in any of them. We won three of them, placed second once, and placed third twice. We had such a great year that I was ranked the number one Young Adult Rider at Novice Level on the USEA leaderboards while she was ranked #22 Novice Horse. 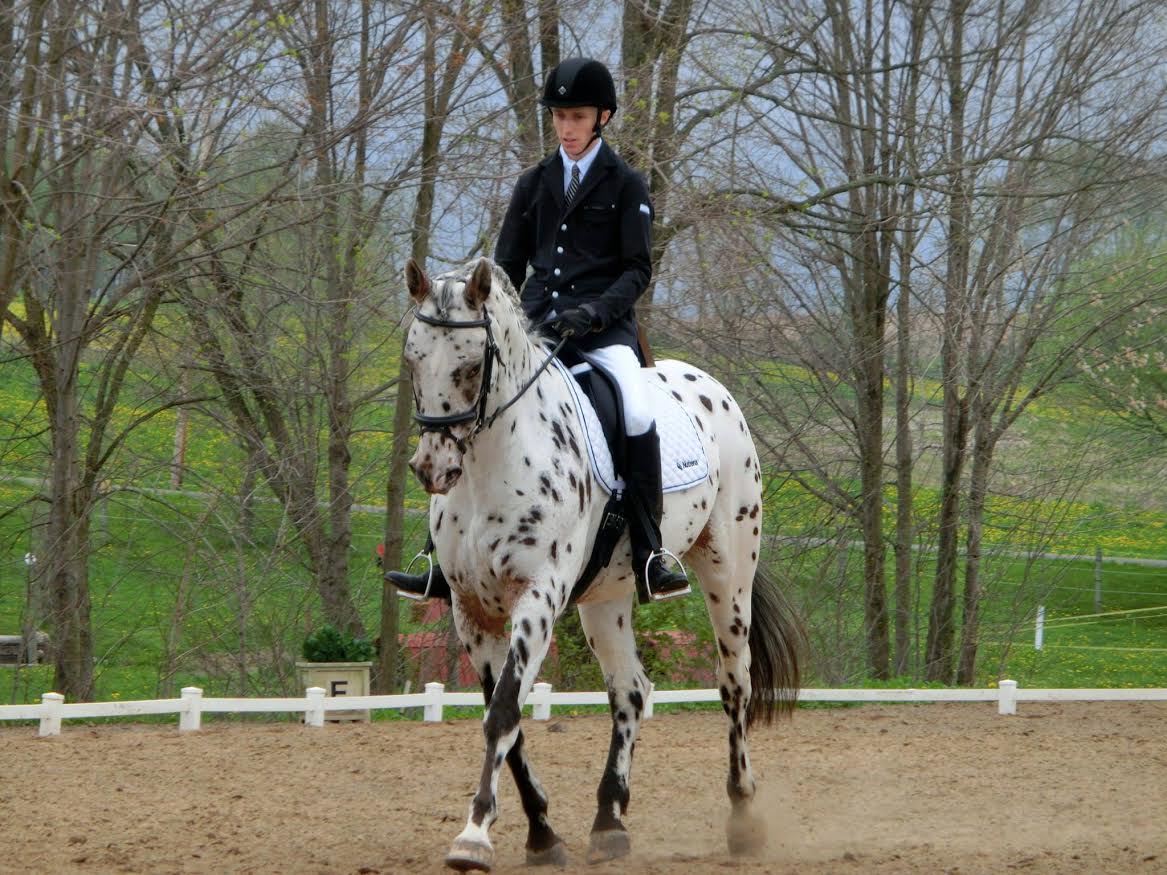 Michael and Elmegaardens Affair. Photo courtesy of the Willham family.

We were riding high on all of our accomplishments and were set to travel down to Texas for the AECs in late September.

We had a pretty quiet week, taking it easy with our last jumping lesson and dressage lesson with my trainers Kari Briggs and Bruce Mandeville before we went to Texas. However, the day before we were to leave, I noticed a small bump on Affair’s leg. I became worried and called the vet out.

My worst fears had been realized: she had a slight tear in her superficial digital flexor tendon. My horse’s well being is of the utmost importance, so I immediately scratched from the show and started making plans for treatment and rehab.

It looked like not only would our 2014 season come to an early end, but I would also not be showing in 2015 due to the long recovery time to ensure that everything was healed before coming back into such a strenuous sport.

That was when my parents and I sat down to talk. They knew how much Affair meant to me, as well as how much my sport meant to me and my ambitions to keep progressing up the levels. They offered their financial support (as well as their undying mental and emotional support) in finding a horse with some upper level experience to “teach me the ropes” and help me move up the levels and continue showing.

I am eternally grateful for all the opportunities they have provided for me throughout my life. Words cannot even come close describe how important their support is to me.

With the help of Phillip Dutton, we found a fantastic young horse who had competed up to the one-star level in Ireland at none other than the famous Fernhill Sport Horses. It was a little nerve-wracking, as I had never gotten to sit on the horse myself, but we saw competition videos as well as videos of Phillip riding him, and we trusted in Phillip’s judgment.

A couple of weeks later, I came home from college for my winter break to be surprised by an early Christmas present: Fernhill Cayenne, a 16.3 hh bay Irish Sport Horse with springs in his feet, a heart of gold, and a glimmer of kindness in his eyes.

I spent the last two months figuring out his buttons and trying to solidify our partnership before heading down to Aiken, South Carolina for an early start to the season. In late February, we left bitter cold Ohio and 10 ½ hours later arrived in warm and sunny South Carolina. 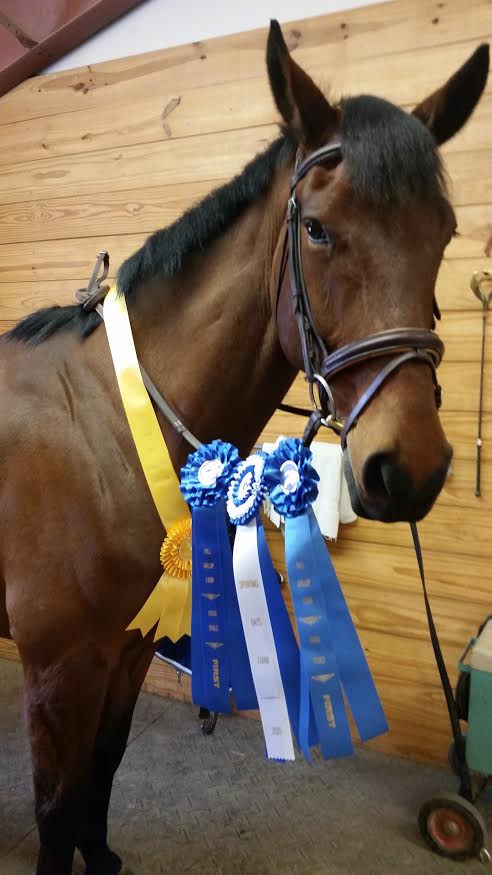 We stayed at Phillip Dutton’s barn, getting several lessons from him in between a packed schedule of three shows in two and a half weeks. I didn’t quite know what to expect, because I didn’t have the chance to ride him in a dressage ring yet, or even outside!

I knew Cayenne was capable of putting in a great dressage test since he has such fantastic movement, and he certainly delivered. At our very first show together at Full Gallop Farm, we put in an astounding 22.8 dressage test and went double clear in stadium and cross country to lead from start to finish in our Novice class. I was ecstatic with how well we performed at our first show together.

But wait, there’s more! Cayenne repeated this performance not once more, but twice. We put in a 25.7 dressage test and double clear rounds at Sporting Days (along with earning third in our random scramble Team Challenge) and then again for our third show back at Full Gallop with a 27.8 dressage test and double clear rounds. After an exhausting few weeks of training and showing, we came home with three blue ribbons. Not too shabby of a start to our partnership and show season!

Not to worry though, Affair will not take it lightly that her new Irish brother is taking all of the glory. She will be fit and raring to go once my vet and I deem it safe for her to resume competing. Affair is not one to be out-done!

After our impressive showing down in South Carolina, I am planning our move up to Training level once shows start up here in Area 8. I could not have done all of this without the immense support of my passion by my parents, as well as my sponsor Nutrena, Phillip Dutton for finding me such an amazing horse, and Carol Gee for producing and selling me this wonderful guy.

Watch out Area 8, we’re taking this season by storm!