EN received an overwhelming response to Hylofit’s Next Top Amateur Contest, in which we sent out a call for amateur eventers to share the big goals they’ve got their sights set on for this season. In addition to winner Courtenay Tuxhorn, who received a Hylofit System and lifetime membership, Hylofit also selected four finalists who will receive a discount on the hardware and a lifetime membership: Kathy Nolan, Jolie Jantz, Jeffie Chaplin and Mallory Stiver. EN is honored to publish all of their entries, and best of luck to all! Read on to meet finalist Kathy Nolan. Go Eventing. 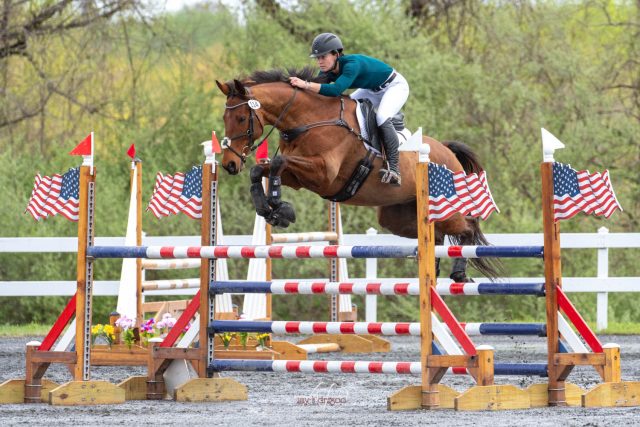 My story starts with a tale of bribery. After graduating from college, I traveled the world and spent several years living in Kenya, Mongolia, and Belgium before attending graduate school in the States. When my graduation loomed and the threat of me moving to India became real, my parents thought they would be sneaky and buy me a horse as a graduation gift. When I called them out on the blatant bribery to keep me in the States my mom simply asked: “So? Do you have a problem with that?” What could a crazy horse girl say to that? Ummm no. Not at all.

That led me to a racehorse breeding barn five years ago where I stepped out of the car and took one look at the bay gelding in the crossties and said: “I want that one.” Now, I like to think that I’m a rational person who goes through the various attributes of a horse and decides whether or
not he has the right build, a good walk, and seems athletic before making any sort of life-changing decisions like bringing him into my life as my first horse. However, once I laid eyes on him I knew I had to have him.

His name was Guido (yes, you read that right) and he was a gangly chicken legged young gelding who barely knew what a canter was and steering was frequently optional. If you patted him while you were riding he would just stop and decide he had been a good boy and must be done for the day. When you watched videos of his races you had to wait several seconds after the penultimate horse crossed the finish line to see him cross. It was long enough that you started to wonder why the camera was still on the finish line. After losing quite miserably in two starts his race trainers did the right thing and retired him to a field of mares and foals who promptly chewed his tail off. When I picked him up his tail was about 2 feet long and his ears were almost as big and I thought he was the most handsome horse I’d ever met. Guido become Theo on the long drive home and, at 27 my dream of owning a horse had finally come true.

After graduation, I had no idea what I wanted to do with my newly minted master’s degree so I did what every horse girl longs to do and moved to Florida for a year to work with some of the best in the eventing business. I never intended to become a professional eventer, but there’s no better way to both postpone becoming a true adult and to start a horse than being a working student. I quickly realized there was a long list of things we didn’t know how to do starting with cantering and steering and ending with jumping. However, if his buck and bolt was any indication he was filled with athletic talent so I had hope. Little by little Theo and I became more civilized and only embarrassed our trainers some of the time rather than all of the time. Fast forward a year and we were rolling around some Training level events with mixed results because Theo decided the dressage ring was where one bucked and bolted rather than danced, but we were doing it. 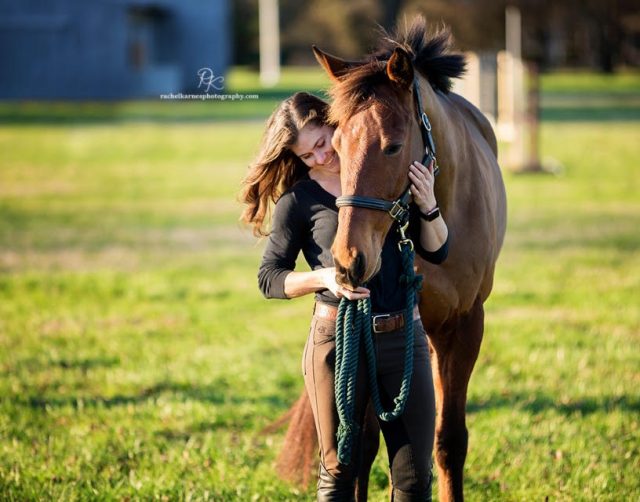 At this point in our story, it was time to return to my actual career, and I found an amazing job in Virginia where I assumed it would be easy to find a great trainer, lots of friends and events would be right around the corner. Little did I know that I was 2-3 hours from any of that and this move would be the start of some serious adult amateur eventing. Working 40 hours a week while trailering every once in a while to find some lessons was manageable at Training level and we began winning and planning the move up to Preliminary. As we made that move, however, it became clear that we needed more help.

I found a grand prix jumping trainer an hour away and started investing in lessons with an eventing trainer that was 2.5 hours from home. I worked long, 12 hour days in order to take afternoons off for lessons. Life became a juggling act. We’d focus on show jumping and our dressage and cross country would start going terribly wrong. We’d switch our focus to dressage and suddenly I couldn’t see a distance to save my life. The other challenge I faced was how to get a horse Preliminary level fit when your barn is so flat you could drag a level across it and the bubble would never change. There just didn’t seem like there was enough time for all of it but we slowly managed to make it work mainly due to the fact that Theo somehow turned into the most amazing, understanding, and patient partner a girl could ask for. The bucking and bolting stopped, the dancing started, and I think he was so used to me missing to every jump, he’d jump anything from anywhere. To say I was lucky is an understatement.

After a spring that included getting second at our first 2*, my trainer somehow managed to trick me into signing up for our first Intermediate. I swear she has magical powers because suddenly I was in the starting box without really understanding how we got there. And then it was over. We had jumped clean around our first Intermediate. I was ecstatic. My eventing goal for as long as I could remember was making it around a 3* and that was clearly right around the corner. We were set! Nothing could stop us now! LOL. Nope.

This spring we found ourselves struggling both mentally (me) and physically (Theo) with the demands of this new level. I have one horse that I ride six days a week and I am trying to compete against professionals who ride multiple horses a day. When you get to Intermediate they sadly don’t have a rider division. You’re up against the big timers and sometimes you feel like you’ll never be able to keep up. There are so many advantages to riding and competing multiple horses it’s hard to list them all. Unfortunately, there’s no room in my budget for a second horse no matter how I crunch the numbers. Potentially if I stopped eating, lived in a box, and didn’t pay my bills … but apparently, those are considered “bad life choices” for an adult.

I lift and workout as much as possible to make up for being a one horse rider but it only goes so far. Some days my trainers seem impossibly far away and our knowledge gaps seem massive. It can be overwhelming and frustrating. Add onto this keeping Theo feeling his best with limited resources. How do I keep him fit enough for Intermediate without adding too much wear and tear on his legs? Just add hills people say. Yes, let me just go build one of those in southeast Virginia. Just take him swimming! I just laugh. Where? Let me interrupt my 40 hour work week to trailer three hours to swim him or find a hill to gallop up. I could do that but when would I have time to take a lesson? It’s one balancing act after another and it can be exhausting.

My initial goal this year was a CCI 3*-S but in the face of all these challenges, it seems incredibly far away. Earlier this spring I was excited to see all the new heart rate monitors come on the market. I thought I could lessen an area of stress by investing in one of them to ensure that I do enough to keep him fit but not enough to put wear and tear on his joints and legs. The cost was unfortunately high enough that it got added to my “maybe someday” list. Between vet bills, chiropractors, shoes, lessons, and board it was an added expense that is just out of reach for an adult amateur with bills to pay.

I realize this essay has gone from a perky upbeat narrative of a girl who somehow managed to bring her first horse up to Intermediate to a story of a downtrodden adult amateur struggling to keep up with the emotional and physical demands of a sport she loves. Despite the struggles, at the end of the day, there’s no better feeling than galloping full speed at the biggest jumps of my life and no place I’d rather be standing than next to Theo while he searches my pockets for treats. Theo is a horse of a lifetime with more heart than humans can fathom and I remind myself to thank him every day for partnering with me on this journey of faith, luck, and courage. It’s a game of highs and lows but the wild ride is worth it.

Click here to read more about how using Hylofit can up your fitness game. Want to learn more about using a heart-rate monitor? EN has a handy guide here. You can also sign up here to receive updates and tips from Hylofit on how to make the most of your conditioning and training work at any level. Go Amateurs. Go Eventing.