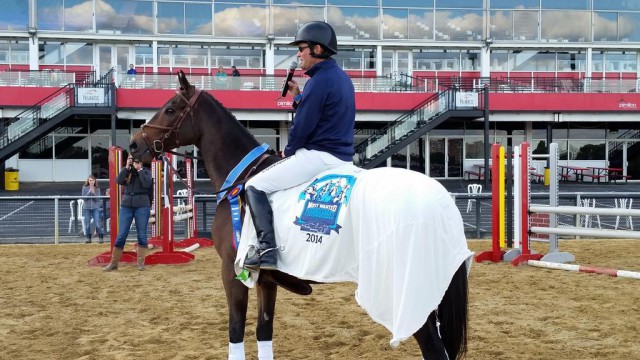 Piloted by Phillip Dutton, Icabad Crane’s story has been a fun one to follow. “This is a cool horse,” Phillip Dutton said upon accepting the first place awards, which include a $6,000 check and a RevitaVet therapy system. We couldn’t agree more, Phillip!

Since beginning his eventing career, Icabad Crane has made eight starts and is now competing at Training level. Most recently, under the tutelage of Waylon Roberts, Icabad finished 13th at Seneca Valley. The former Preakness Stakes runner gained massive popularity with the eventing crowd for his easy demeanor and affinity for eventing that seemed to come naturally to him.

The Retired Racehorse Project put up a poll for the public to vote for their favorite Most Wanted Thoroughbred, which Icabad Crane handily won with 24.2% of the final poll vote. Phillip and Icabad also impressed during their demo when they showed off their adjustability, riding a line in 4, 5, 6, 7, and 8 strides before coming back down in 4 again. How’s that for retraining?

Icabad Crane first did a demo with @DuttonEventing aboard, then was hacked around by a 13-year-old girl. pic.twitter.com/2elaH9rT5g — Jen Roytz (@JenRoytz) October 5, 2014

After Phillip’s demo ride, his 13-year-old daughter, Olivia, got on and hacked the gelding around, once again showing off his mild manner and rideability. Phillip has done a great job with Icabad Crane, and the top prize comes as a well-deserved nod to his skills in the saddle.

We’d like to thank each and every EN reader who voted in the poll for America’s Most Wanted Thoroughbred. All of the candidates are uniquely deserving of recognition, but we’d be lying if we said we weren’t rooting for the eventer who stole all of our hearts. We’d also like to extend our thanks to the Retired Racehorse Project for all of their hard work in promoting the OTTB, which is truly one of the most valuable (and most wanted!) horses out there today.