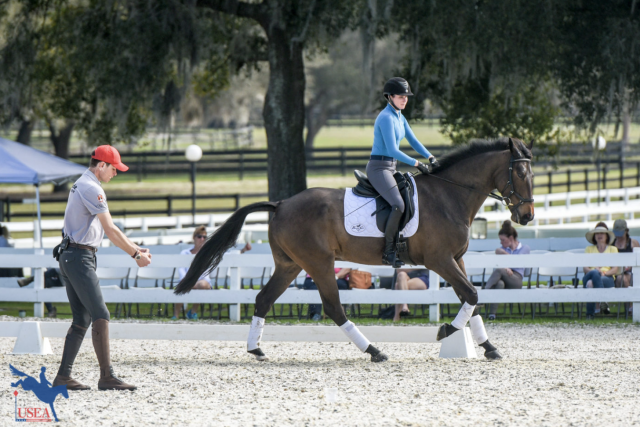 Derry channeling his inner Valegro at the ICP Symposium with Maxime Livio. Photo by Leslie Mintz/USEA.

Each year the USEA brings a top international event rider to the States to teach at the Instructors’ Certification Program (ICP) Symposium, and this year’s clinician did not disappoint. In addition to being a five-star winner with a slew of other top results to his name, Maxime Livio also rode on the French bronze medal team at the 2018 FEI World Equestrian Games. Maxime channeled all of his experience and energy into two days of lessons — dressage on Monday and jumping on Tuesday — at the beautiful Grand Oaks Resort in Weirsdale, Florida.

I was extremely lucky to ride in a Preliminary dressage group on the first day. My horse, Derry, is an 8-year-old Irish Sport Horse who is still building strength to carry himself, and having a slightly longer back means it’s that much more difficult to properly engage his hind end. Add in the fact that Derry is a big, rangy horse and I have what my trainer, Jimmie Schramm, affectionately refers to as “chicken legs,” and it can be a challenge for me to package him together while still maintaining enough impulsion.

Maxime took one look at our working gaits and said I should never settle for “in the middle” in our dressage work at home. Instead, he had me push Derry’s stride forward and then collect him back to balance before sending him forward again and repeating the exercise. My first attempts at this exercise still lacked tonique — a word Maxime used frequently to describe power and impulsion. He wanted me to really send Derry forward and then use my core to really collect him back and find balance, which he explained as sitting “inside” the horse.

“The first time even if he is a little bit fast, let him go,” Maxime told me. “When you feel that he is pushing underneath you, then we will balance him and then we will collect him. If we try to balance him with not enough forward behind the saddle, then when you balance he will lose the forward and fall behind you.” In the moments when I balanced Derry but he stopped pushing from behind, Maxime told me to instead do 10 meters of focusing on the hind leg, then 10 meters of balancing. “After two circles of that, try to get both.”

Maxime also wanted Derry bounding off the ground with each stride in the canter, which he demonstrated by pretending like he was dancing on hot sand. “You know when you are on holiday and the sand is too hot? That’s what I want the canter to be like,” he explained. He also constantly reminded us to “find the music” in the gaits — four beats for walk, two beats for trot and three beats for canter.

Irish ponies can dance 💃🏻☘️ Thank you for the photo @lrosemintz 🥰

Derry absolutely tried his guts out, and Maxime said I should keep dressage sessions to a short 25 minutes at this point in his training, but ensure that he is working hard during every second — using the lengthening and collecting exercise and finding the music in the gaits, all the while keeping tonique in mind. While Maxime said he thinks Derry will feel quite strong to ride and tough to package at this stage, it will ultimately help us reach the end goal of true self carriage.

Training at home is about taking risks so you know your horse’s limits, Maxime explained. “Save the beauty for the ring at competitions.” He also aptly noted that “the judge will see 50 horses per day, so you have to do something to keep them interested.” I’ll have that thought at the forefront of my mind — along with plenty of tonique — when I go down centerline at our next competition.

Thank you to the USEA for bringing Maxime to the ICP Symposium. The action continues today with the Young Event Horse Symposium, in which Maxime will be evaluating 5-year-olds for their potential to one day compete at the highest level of the sport. Be sure to follow the USEA on Instagram for more photos, and stay tuned to their website for additional coverage from the symposium. Go Eventing.