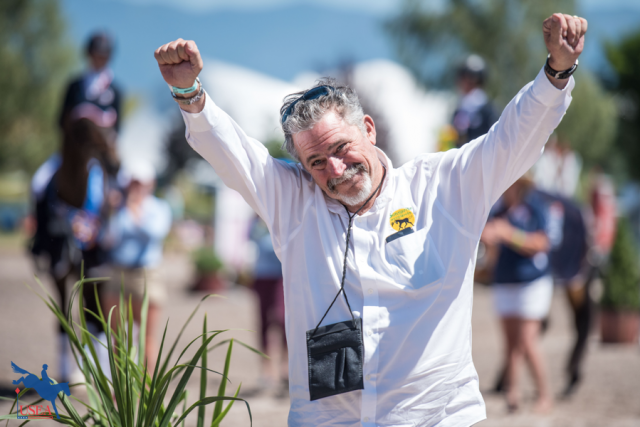 Don Trotter at The Event at Rebecca Farm. Photo used with permission from the USEA.

Eventing lost a wonderful man Sunday as Don Trotter passed away peacefully after battling a short illness. Don was a key contributor through his volunteerism to the sport of eventing in the U.S. Together, Don and his wife Pam owned Sunsprite Warmbloods, breeding and placing many top horses.

When it came to helping riders, Don could always be found by the warm-up at competitions — not just watching his horses go, but acting as ring steward. As he explained in an Athletux Volunteer of the Month article in 2016: “As a horse show husband, I frequently found myself bored beyond belief at shows. I had nothing to do and often found myself hanging out at our rider’s barns.”

Then in 2009, Don was offered a job he couldn’t refuse: ring steward. He enjoyed volunteering so much that he reached out to event organizer and friend, Robert Kellerhouse, asking if he could try out a few other volunteer positions. Kellerhouse let Don experiment with different jobs from cross country control to jump judge, but he always found his way back to ring steward, his favorite.

Don said his satisfaction with his favorite job was simple: “If my presence in warm-up makes a rider more relaxed or an organizer more confident the show will run on time, then I’m doing my job to contribute to the sport of eventing. That’s rewarding to me.”

His presence was calming and nice to find in a sometimes crowded and hectic warm up. Many riders are notoriously tense before competition, and you can bet Don was always there with a subtle joke to make them laugh or a few kind words to relieve any nerves.

Don made an impact in whatever he did. Originally working for the United Nations, in addition to Sunsprite and his volunteer work, he excelled in crafting breathtaking show jumping fences with his business Jumpwerks, and was a passionate horticulturist of exotic plants.

Together with his lovely wife Pam, Don also helped spearhead new volunteer recognition software, created several awards to recognize volunteers and received numerous awards himself for his dedication to the sport.

Pam has suggested the best way to honor Don’s memory is to go volunteer. Volunteering is the heart of the sport, and volunteering brought Don great joy.

At this time, arrangements are being made for a Celebration of Life. Details will be made available as soon as they are known. In lieu of flowers, donations may be made to the USEA Foundation’s Volunteer Incentive Program at www.useafoundation.org/donate.