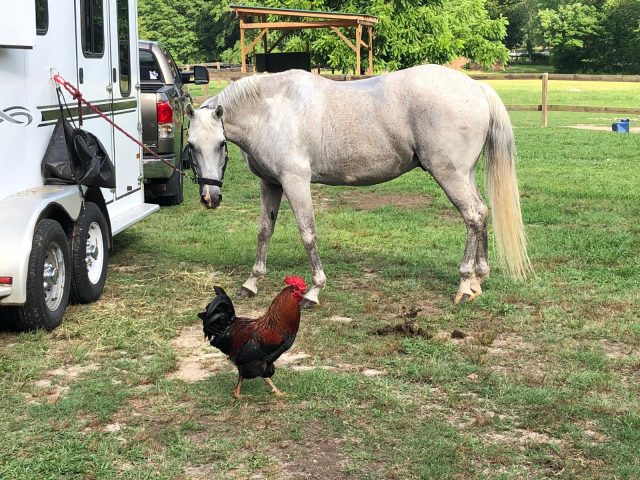 Ideally, your event horse should be brave right!? Tell that to this porky pony who is coming out of retirement to play. Everything was all sunshine and rainbows until we saw farm animals. To be fair, the goat did try to butt him a few times, but you’d think we faced him against some real trauma when you consider that he broke away from the trailer shortly after this picture was taken.

The Genesee Valley Hunt Horse Trials has announced they will accept late entries through July 2nd. There will be a $50 late fee for the July 13-14th event, but take you pick at levels from Intro through Modified. [Omnibus]

While most of us have been focused on the upcoming Pan American Games, our European friends eagerly await the European Championships which will be held at Luhmühlen August 29-September 1. British Eventing has named 14 riders on the long list including Badminton winner Piggy French and Kentucky winner Oliver Townend. [18 pairs long-listed for British squad for eventing European Championships]

Equine Influenza is not purely a seasonal sickness, and the UK has actually seen an uptick in cases in the second quarter of this year. Horse owners are urged not to let their guard down. [Equine flu ‘gathering pace’ as experts warn owners not to drop their guard]