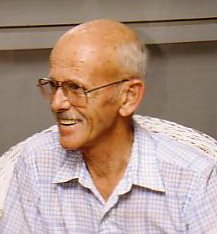 The eventing world lost another great man, advocate and volunteer this past weekend. John R. “Jack” Ernst, of Gravel Ridge, Arkansas, passed away on May 14, 2016. He was 83.

Jack loved horse people, eventers in particular. While he never rode himself, Jack was frequently quoted as saying, “They’re just super people.” While his accomplishments in the horse world were many, he liked to call himself the “chief flunky,” and his e-mail address attested to that fact.

Jack was a church goer, served in the United States Navy, was father to two daughters, husband to Barbara, herself a technical delegate, and helped put the United States Pony Club and eventing on the map in the state of Arkansas through rallies and horse trials held at their Jubilee Farm in Gravel Ridge.

Jack and his wife bought Jubilee Farm early in their marriage when Jack was still in the textile business. They named it Jubilee after an old Methodist hymn which sang of the year of Jubilee. The word “Jubilee” also began and ended with Jack’s initials. So began the legacy of the one of the longest consecutively running horse trials in the history of the United States Eventing Association.

While I could spend the rest of this article talking about all of the wonderful things Jack did, everything from mowing the grass on his 45-acre farm so local eventers and Pony Clubbers could come school cross country to being the head communicator for the Head of the Lake (yes, THAT Head of the Lake) for over 20 years, what I really want you to know is what a wonderful, kind, caring, selfless person he was.

A friend of mine said it best, and I TOTALLY agree, “If I could have chosen a grandfather, it would have been Jack.” That was just the kind of man he was.

Yes, Jack was the recipient of the Governor’s Award, which salutes outstanding volunteers within the USEA. Yes, he traveled all over the country as a volunteer at every event you could possibly name, stopwatch in hand (his golf cart was a fixture in the corner of the stadium arena at Holly Hill Horse Trials for years). Yes, his farm was the home to the Rackensack Chapter of the United States Pony Club. 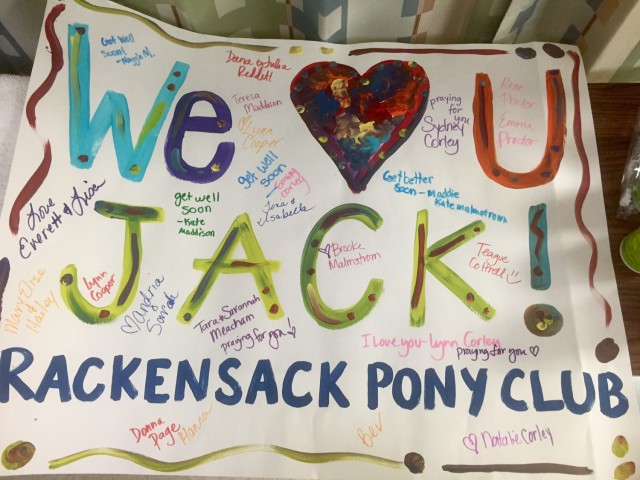 But Mr. Jack (as I always called him) was my friend and my mentor. Like just about everyone he met, I loved him dearly. Mr. Jack is responsible for instilling in me the importance of giving back, of volunteering, in whatever way you can, whether it’s picking up sticks on the cross country course or scribing in the dressage judge’s box.

I remember a particular trip to the Kentucky Horse Park in the early 2000s with my trainer at the time. She was competing at the Champagne Run Horse Trials, and I was just getting reacquainted with the sport as an adult. (I had competed as a teenager way back when eventing was called combined training!)

The trip did not go as planned. My trainer Kari ended up having a pretty nasty fall on cross country, which resulted in a broken hand that required surgery. At the time, I had no idea how I was going to drive a dually diesel truck pulling a four-horse trailer all the way back to Arkansas with an injured, not happy trainer with me.

Mr. Jack to the rescue! He cut his trip short, driving the truck and trailer the entire 10 hours home while I followed in his minivan. That’s just the kind of man he was. 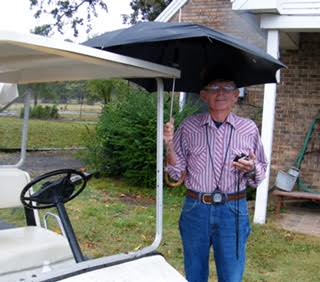 Photo of Jack Ernst from The Hunks of Area V Calendar, submitted by Catherine Baker: “Jack with his golf cart and timers and umbrella ready to volunteer at another event! Wonderful man that will be missed!”

Mr. Jack loved eventing; loved horse people; and he believed in DOING, doing whatever you can to keep what’s important to you going. His beliefs came from his great big heart. It’s why so many people like me loved him and were touched by him. I would be willing to bet money that just about every cross country course in Arkansas, whether backyard or show quality, has a fence built by Jack Ernst.

And it didn’t matter if it was sleeting, the sun was shining or the tornado sirens were blaring, Jack was there to see the show go on or everyone get home safely. Jack Ernst embodied what we should all aspire to be: hardworking and generous.  The eventing world won’t be the same without him.

It’s been a great ride Mr. Jack! See you at the finish line!

If anyone has photos of Jack, please email them to [email protected] so we can include them in this article. In lieu of flowers, memorials in Jack’s name may be made to North Pulaski United Methodist Church. An online guestbook is available at www.griffinleggettresthills.com.