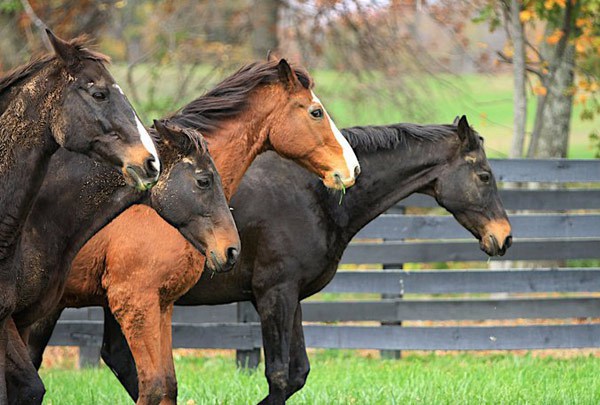 The EN team was sad to learn that Karen O’Connor’s iconic partner Prince Panache was euthanized today at the age of 32.

“Nash,” a Thoroughbred gelding owned by Jacqueline Mars, had many accolades to his name, notably winning Individual and Team Bronze Medals at the Sydney Olympic Games in 2000. He also competed at the World Equestrian Games in Rome in 1998 and completed Badminton that same year.

Karen kindly spoke with us today about her special horse: “He was wonderful cross-country — bold, brave as a lion on course, nimble and fast.”

He had a winning personality as well, both toward his human and equine friends.

“He was one of the most loving horses I’ve ever met,” she said. “I never saw him put his ears back, ever.”

It’s appropriate that he lived the final days of his life during Rolex weekend, as he won the event in 1999 and placed third in 2000. Karen noted the synchronicity of the event and Nash “choosing his time.”

The original plan was to wait until Monday in hope that Karen could be with him when he passed. But when it became clear that the timeline needed to be moved up, Karen says, “It wouldn’t have been fair to make him wait. He passed very peacefully.”

Nash lived out his retirement at Stonehall Farm in The Plains, Virginia, under the wonderful care of Sue Clarke. Karen was able to visit him there last week.

Custom Made, 31, is now the sole living member of the Fab Four. Biko died in 2014 at 30 years old, and Giltedge died last year at 29 years old. It says a lot about the care these horses received in their golden years that they all lived to such a ripe old age.

Our thoughts are with Karen, Ms. Mars, Sue and all who knew and loved Nash.