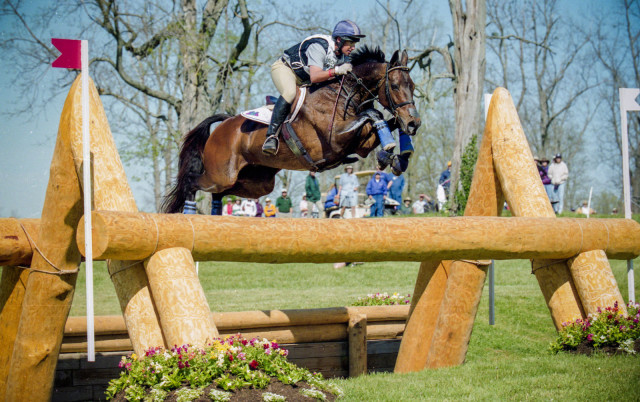 David O'Connor and Giltedge on their way to winning the Rolex Kentucky Three-Day Event in 2001. Photo used with permission from Shannon Brinkman.

The international eventing community has lost a legend in Giltedge, who died yesterday at his owner Jacqueline Mars’ Stonehall Farm in The Plains, Virginia, at a ripe age of 29 years old. Inducted into the USEA Hall of Fame in 2012, the quirky Irish Sport Horse gelding will be remembered as one of the most highly decorated and influential horses in U.S. eventing history.

One could say Giltedge’s legendary partnership with David O’Connor would never have come to fruition without William Micklem, who spotted the horse in Ireland and recommended that Karen and David try him in 1994 as an 8-year-old. Karen ultimately decided to choose a different horse, Prince Panache, for herself, but David ended up with Giltedge, who was then called Giltex.

“He looked the part — leggy, lean and the most fantastic look in his eye,” David recalled at the horse’s USEA Hall of Fame ceremony in 2012. “This wasn’t the most fantastic horse I’d ever seen. He was a good mover, not great. He was a good jumper, but not with endless scope … But William said, ‘You have to get him because he’s going to come into his own under your system.’ So we did.”

It’s a scene William still recalls very clearly: “As Karen and David O’Connor tried Giltedge in Eric Smiley’s yard in the north of Ireland, I knew they were not convinced he was good enough, so they had to take a risk and trust my judgement, but I had no doubt how special he was,” William said.

“Two years earlier I had seen him at Rademon Horse Trials for the first time and saw him use his huge intelligence and great jumping technique to save himself from a difficult situation on the cross country.  He was always so quick to asses a situation and always so courageous.”

Giltedge’s breeding had also caught William’s eye: “He was by Glen Bar, who was by the extraordinary Thoroughbred stallion Bahrain, but was also 25% Irish Draught, which is often forgotten. I believe Giltedge’s longevity and intelligence spring from his Irish Draught genes and that he was the equal of those other great Irish eventing legends bred the same way: Kilkenny, Carawich, Eagle Lion and Custom Made.”

While breeding plays an important part in any great horse, William knows David’s relationship with “Tex” ultimately cemented their names in eventing history. “It was the outstanding partnership that David formed with him that took his talent to a new level,” William said. “Without doubt they were one of the world’s great eventing combinations, and Giltedge thoroughly deserved his place in the USEA Hall of Fame.”

In their storied career together, David and Tex won at least one medal each time they represented Team USA at major championships between 1996 and 2002, establishing themselves as the go-to anchor pair that could always be counted on in team scenarios during this period of U.S. eventing.

In all, David and Tex won 21 events in their career, including the Rolex Kentucky CCI4* in 2001 and Fair Hill CCI3* twice in 1995 and 1997, marking themselves as an extremely consistent combination. The horse only pulled one show jumping rail in all of the CCI events he ever completed, and his owner Ms. Mars spoke very fondly of him at the 2012 USEA Hall of Fame ceremony.

“Tex has always had and always will have a special place in my heart because he is a little engine that is ‘I think I can,’ and he did, but he never could have done it without the big engine of David pushing him along,” Ms. Mars said. “They were a fabulous team, and although David had other great horses, Tex was there for him at the right place at the right time in David’s team career.”

Like many of the great ones, Tex was well known for his quirks, which longtime O’Connor Equestrian Team groom Max Corcoran recalled today. The horse never did tolerate cross ties, and he was a head shaker, though David discovered that if he allowed Tex to scratch his nose right before he went into the ring, he would keep his head quiet during his dressage tests.

As one of the most famous stories about Tex goes, the horse was fully tacked up and waiting in his stall when David tried him in Ireland in 1994 because, as the OCET team discovered upon bringing him home to the U.S., Tex hated having his head touched for bridling, braiding or any other activities involving his ears — something Max remembers well.

“One of my first away events with Karen and David was to Red Hills in 2002. Vanessa Roman was one of David’s grooms at the time and was there looking after Tex. He hated his ears being touched, and it took her three hours to braid him. She couldn’t get the top two braids done, so David did them. Tex only really ever trusted a few people to be up by his ears and only had his forelock braided for three-day events, and the braid stayed in all weekend from Wednesday to Sunday,” Max said.

“He taught me a ton as far as looking after horses — how taking your time was critical, how there are many ways to accomplish something, how to listen to the horse. I thank Tex for all he did for the U.S. and for David, for teaching so many of us valuable lessons about horsemanship, that not all horses are the same and reminding us to be patient.”

David likes to tell the story of Tex’s final competition of his career at the 2002 World Equestrian Games in Jerez, where the horse served as pathfinder for the U.S. team on a grueling cross country course and ultimately helped Team USA win gold. Following the medal ceremony — and after nearly a decade of reluctantly tolerating having his forelock braided for competitions — Tex turned to the wall of his stall and rubbed off his entire forelock in one fell swoop.

Tex deserved a grand retirement after everything he achieved, and that’s exactly what he received at Ms. Mars’ Stonehall Farm, officially retiring at age 16 and attending Rolex one final time in 2003 for his retirement ceremony. David used him in demonstrations around the U.S. for several years after, riding at different events without a bridle — just like Tex always wanted.

Tex lived out the remainder of his days under the wonderful care of Sue Clarke, enjoying a large field at Stonehall with the rest of the “Fab Four” and fellow OCET Olympic horses: Prince Panache, Custom Made and the late Biko, who died last year at 30 years old.

There are many people to thank for playing key roles in Tex’s life: Pat Harris, who overhauled Tex’s nutrition program when he struggled with tying up; his vet crew of Kent Allen and, later in his life, Paul Deihl and farrier Paul Goodness; Ed Gibney, Sam Burton, Colleen Roberts (née Hayduck), Sue Clarke, Max Corcoran, and, of course, David and Karen O’Connor and Ms. Mars.

David learned the news of Tex’s passing while at Burghley coaching Team USA. When asked about his favorite memory of one of the greatest horses in U.S. eventing history, David said he’ll always remember Tex’s one-of-a-kind personality and competitive drive to excel as an event horse.

“He wasn’t the fastest horse in the world, but he was so competitive in his mind. He tried so hard in everything that he did. He loved being in the game,” David said. “You know the expression ‘he was a gentleman and a scholar’ — Tex was both. He thought about things in his own way. He was a beautiful horse every day.”

Click here to watch Ms. Mars and David O’Connor speak about Giltedge in his 2012 USEA Hall of Fame induction ceremony, including how they decided to change his name from Giltex to Giltedge.