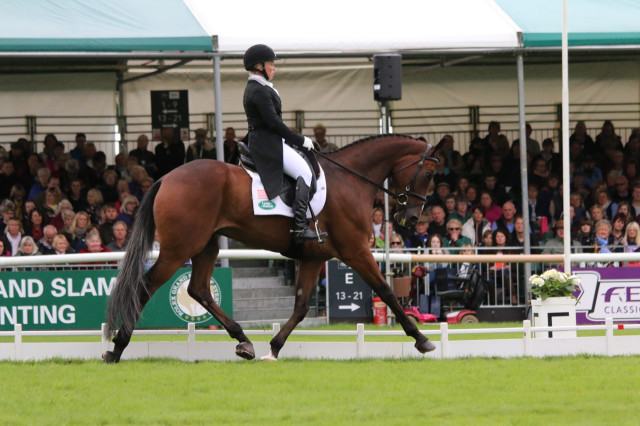 Covert Rights showed real flashes of brilliance in his Land Rover Burghley dressage test this afternoon, an exciting sneak peek of how much more is still to come from this lovely, young horse and although owner/breeder/rider Colleen was pleased overall with his performance, she admitted it’s her nature to always want more and so was rueing what might have been.

“I’m never happy! He’s got so much more potential in there and I’m a little disappointed that I wasn’t able to realise it today. He’s coming along and developing his ability to handle the astmosphere and it’s going to be a work in progress for a while. Am I happy I stayed in the ring? Absolutely! He gave me the best test he could today, but me being the rider that I am I always want more.”

After a beautiful entry and halt to start with (earning a 9 no less!) CR broke into canter in the medium trot, a result of him actually getting a bit quiet and behind her leg, Colleen said, but overall there was plenty to like, and now she looks ahead to the real test tomorrow.

“This is Burghley so this is never a dressage show. I’m excited to see how he copes when he goes out tomorrow; he does like big fences and he does like good questions and there’s plenty of both so can we string them all together? We’ll have to see! I absolutely love coming here, it’s a dream, to be able to come over and be a part of this history is just fantastic. It’s an amazing venue, an amazing course, everything is just unparalelled and it’s just fantastic.” 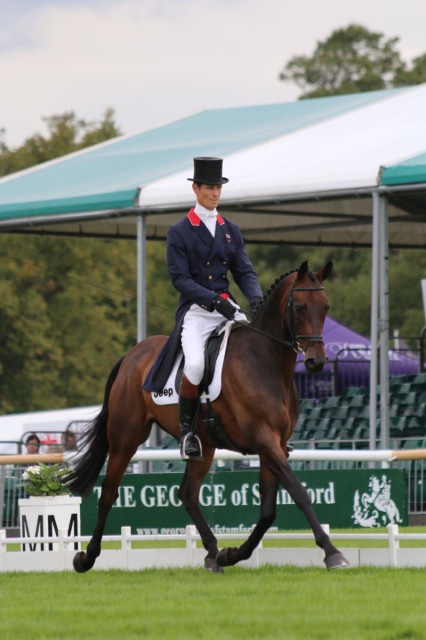 William Fox-Pitt and Fernhill Pimms tie for the lead at Burghley after a beautiful test. Photo by Samantha Clark.

The atmosphere was buzzing still from the first test after lunch — William Fox-Pitt on Fernhill Pimms whose 34.3 provisional score was later amended to 34.2, tying him for the lead on Burghley first-timer Fernhill Pims with Michael Jung and his Rolex Kentucky winner fischerRocana FST.

Fernhill Pimms’ test was a sheer delight, but for one slight bobble in the change (three 4’s, which cost him the outright lead) but otherwise flawless, and William earned three 9s for his riding. Afterwards he thought that except for Chilli Morning’s test, this was probably one of his best scores at a four star, and he was especially pleased considering it’s the horse’s first  appearance at this level.

“I’m delighted, I think that’s a big deal for a first time four star horse; there was a great atmosphere in there and he really went his best, that’s all I can say, he couldn’t have done any better yet, it’s the first time he’s done that four star test in a competition so it bodes very well. He’s just got a lovely attitude and a presence, he’s lovely to ride. I’m hoping the next two days will be just as easy as that but I’m not sure they will!”

William has walked the course a few times already, “I think it’s quite a brave course; Mark Phillips certainly hasn’t backed off. I think the course this way round is going to be tougher, I think we all do. There’s a lot to jump — the first three fences are fine and then the rest…you’ve got to be up for it. I’ll find out a lot about my horse tomorrrow, he’s inexperienced to be here but I believe he’s mentally ready, he’s physically ready but he’s never seen anything like that. I’m hoping he’s genuine and goes through the flags and come home happy with him, and the rest is a bonus!”

Michael Jung is about to go so we’ll be back with the last report from Burghley dressage soon. If you missed the morning report, click here to read comments from Laine Ashker and Tim Bourke. Lynn Symansky and Laine Ashker are holding on to spots in the top 30 with some of the heavy hitters still to come.

Don’t forget to join Anna Ross Davies and Pippa Roome in the Horse & Hound live blog for top notch commentary here. Click here to catch up on all of EN’s coverage of #LRBHT so far, and click here to watch videos on demand via Burghley TV. Thanks for visiting Eventing Nation today and Go USA at Burghley and Go Four Star Eventing!