EN guest columnist William Micklem brings us his latest thoughts after a weekend spent at the FEI World Eventing Championships for Young Horses at Le Lion D’angers. Click here to read all of William's column for EN and here to visit his website. 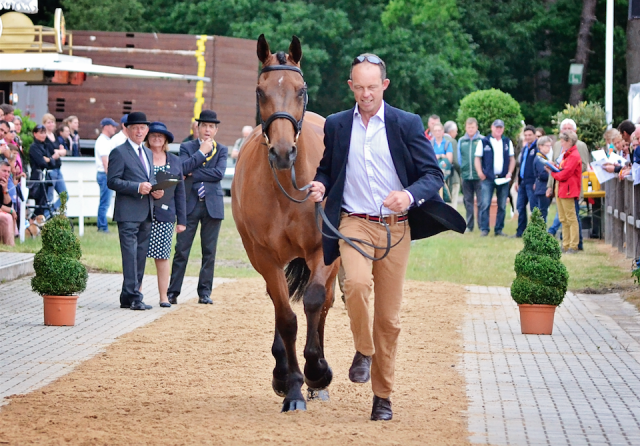 With youth and support and opportunity, life is full of sporting possibilities. Mix this with a little passion for what you choose to do, stir in the ability to get out of bed each morning, and relatively speaking life is easy and success is inevitable.

Then as the years pass by, things get more difficult. More responsibilities, less time, less support and in the case of horse riding less suppleness and probably less nerve.

So as I sat at Lion D’angers at the FEI World Eventing Championships for Young Horses, I reserved my greatest admiration not for the young bloods but for the slightly older riders, who have resisted the temptation to change their focus to the gentler climes of pure dressage or show jumping and are still challenging themselves by galloping across country.

Jonty Evans is an elite rider, a member of the Irish senior team that won at Boekelo last week ahead of the USA and New Zealand, and a man who sees the Rio Olympics at the end of his current list of action steps and short term goals. Yet Jonty is 44!

His natural modesty and manners endears him to everyone, but it is only in recent times that either he or the eventing circus have started to believe that the highest honours are within touching distance — if the next 10 months and 300 days of supreme dedication and effort can be described as touching distance!

“I want this more than I have ever wanted it,” he says, “and at long last I now believe it is possible.” His holistic preparation has meant shedding over 30 ponds in weight from his 6 foot, 6 inch frame and an equal amount of doubt from his mind.

He remembers, as a psychological turning point, the time when Andrew Nicholson telephoned after completing Burghley and said to him “that was really good … you were up with the best there.” After a three-year stint working for Andrew, he knew that this was huge praise from a man not known for putting any gloss on another rider’s performance.

But Jonty is astute enough to realise that the real key to his mental strength and positivity is not to compare himself with Andrew, but instead to keep achieving a new personal best. His competition is with himself, and he loves the fact that in this sense he just keeps winning … and winning becomes a habit.

Jonty’s story of quiet progress from “average” to “excellence,” and his current competitiveness at the highest level despite limited resources, is one that needs a wider audience because it is inspirational. And yes, I know that William Fox-Pitt is 46 and Andrew Nicholson is 54, but they are both definitely on a freak spectrum that is almost impossible for most of us to relate to. Indeed, they have each been winning international events for over 25 years.

In many ways it is both more interesting and more valuable to study Jonty’s journey and see that it is possible to make extraordinary progress from a fairly low base even as the years move on.

Like almost every rider in the two classes at Lion, Jonty is a full-time rider with many horses to ride. So in truth I have even more admiration for another Irish rider who was also there. He is in the same age bracket, at 48, and yet is also an amateur rider who is only able to ride one or two horses very early in the morning before his day at the office. 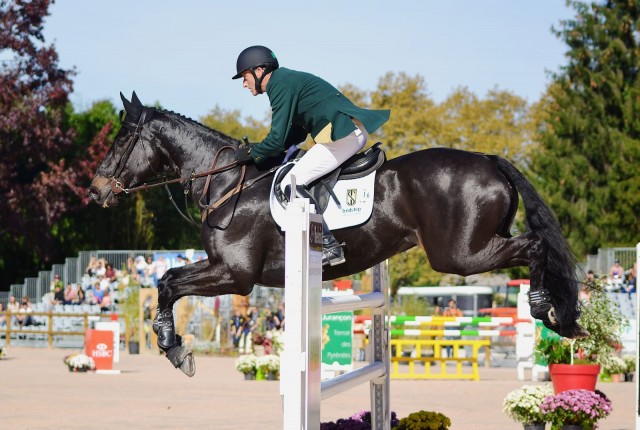 Aidan Keogh and Master Tredstep at Pau in 2013. Photo by Jenni Autry.

His international timetable also means he is away from home and his horses for weeks at a time. What he has achieved in the circumstances is simply outstanding. His name is Aidan Keogh, the founder and CEO of the very successful and innovative Tredstep Ireland. I have to declare an interest, as I have worked with him as a coach ever since he was a very skinny 11-year-old boy on a palomino pony called Primrose.

At Lion D’Angers Aidan rode a 15.3-hand mare called Pride of Tredstep, aka Molly, who is by the Thoroughbred Lord Noble out of a coloured pony mare! She looks somewhat like a cob and was inexpensive to say the least, but with Aidan was the leading Irish horse in the 6-year-old class at Lion D’Angers last year, beating many of these truly beautiful and hugely valuable event types that are at these world championships.

Molly breaks the mould of assumed expectations, just as Aidan and Jonty break this mould. Molly was found for Aidan by the world famous Paddy Hughes of the equally successful additives and supplement company Horse First. Paddy also found Master Tredstep for Aidan, and they completed the four-star at Pau two years ago. A huge achievement.

With both riders and horses it is foolish to just dream of possibilities without being honest about realities, but Jonty, Aidan and Molly all remind us not to make assumptions about ability and potential at too early a stage. Why should the slightly older man not challenge himself and go beyond expectations? Even if they do not end up at the Olympics, they will be happier men at the end of their lives than those who quickly build barriers to their own progress and have nothing but regrets to sustain them.

Yes, I haven’t written about female riders in this article, but I did mention Molly! In addition, my article “In Praise of Women” appeared earlier in the year.