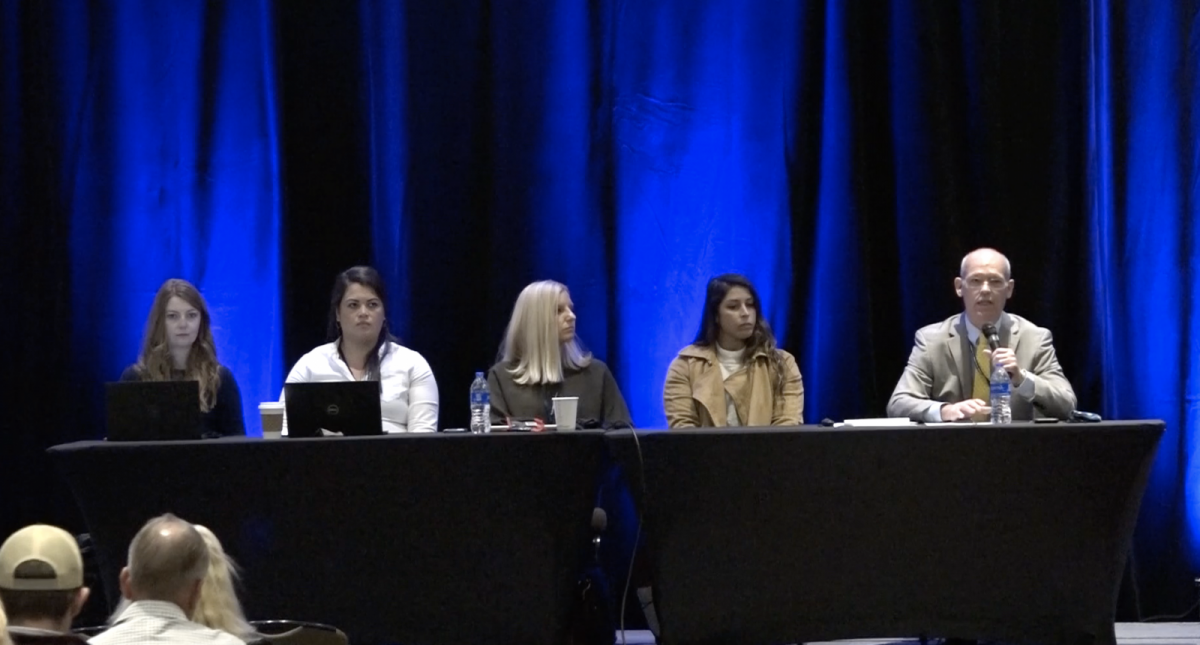 Two hot-button topics topped the sessions on Friday’s schedule at the USEA Annual Meeting & Convention in Albuquerque, New Mexico. This year’s annual meeting of members feels a bit more wrought with tension (in some sessions at least), with the recent non-renewals of high performance eventing leadership contracts (USEF Eventing Performance Director Erik Duvander, Managing Director of Eventing Jenni Autry and eventing show jumping coach Peter Wylde have all departed from their positions as of this past week) as well as the as well as the ongoing controversy surrounding the new calendaring process (a USEF-led initiative).

US Equestrian CEO Bill Moroney took the hot seat first this morning to lead the USEF High Performance Athletes Open Forum, where he outlined the plan for the next few months following the departure of Erik Duvander, who took the helm from David O’Connor in 2017. Mr. Moroney took a few moments to outline the feedback and evaluation process that would eventually lead to the decision not to renew leadership contracts, particularly that of Erik Duvander.

“Throughout this process, we had an incredible amount of feedback,” Moroney stated. “One of the key points that made the decision-taking even harder was the fact that we knew and recognized through this process that Erik brought a certain element in the training he did one on one with people and in groups of people – that they really appreciated and found a real value in. However, the evaluations aren’t done just off of just one situation, they’re done off the analysis of multiple issues across the board that have led us to today.”

Two components of evaluation have happened over the last three months or so: confidential surveys were sent to program stakeholders (later during the session, several individuals commented that communications often went to spam folders or were otherwise missed), which led to the request for more direct meetings with USEF leadership for additional communications. The feedback gathered was then analyzed “for patterns, not outliers” and three areas emerged as being most majorly in need:

“We learned from this process that we don’t always explain things we know to the outside,” Moroney conceded, noting that much of the strong feedback received from committees, athletes and owners centered around a lack of transparency or communications. He also noted that the athletes themselves provided “the greatest amount of feedback”.

These discussions, which Moroney estimated to have taken place over the last 10 to 12 weeks, eventually identified two key focus areas going forward: leadership and responsibility. This led to some analysis of what other disciplines have done in terms of structuring their high performance programs. Show jumping was a notable example, having worked under the technical advice of Robert Ridland since 2013 with multiple WEG, Olympic and Pan American medals earned during his tenure. These riders often work with their own coaches at home, relying more heavily on the role of a technical advisor at major competitions.

This is one avenue on the table for US Eventing — but a decision has yet to be made and will be given to a yet-to-be-formed task force aimed at restructuring the eventing high performance program. Moroney noted that anyone interested in possibly participating in this task force should contact US Equestrian.

Having a program without leadership 10 months removed from the 2022 FEI World Championships for Eventing, slated for September in Italy, is unsettling to say the least. Moroney acknowledged that WEG was at the top of the priority list, naming several tasks that will need to be undertaken in the process of establishing new leadership. This list includes the recruitment of a new Managing Director, finalization of the 2022 competition calendar and WEG selection process, identification of the next cycle of high performance athletes, and the solification of leadership decisions to guide the listed riders. The vacant Chef d’Equip role, Moroney explained, will be filled once this structure has been identified.

To say that the departures of high performance eventing leadership has garnered surprised reactions from most would likely be an understatement. The workings of the evaluation process outlined in this session remain a bit murky — several riders and owners raised questions about the communications process, the communications roles within the US Equestrian office, and exactly how many riders had the opportunity to give input, none of which received direct answers — as does the timeline moving forward. We can expect to see more official communications on the forthcoming task force and its decisions in the coming weeks.

Moroney also came under more direct questioning regarding the actual decision not to renew Erik Duvander’s contract, with multiple mentions of the recent results achieved by the U.S. team (most notably a win at Aachen, a Nations Cup silver medal at Boekelo, and an American 5* winner at Maryland). “I totally get what you’re saying,” he responded. “We’ve had some recent results at Aachen, Boekelo and Fair Hill that were amazing. But those results are after four years. And are those sustainable? And when you look at those results, they were also created by the people that were at the table, taking personal responsibility. Here we are circling back to that theme of personal responsibility for preparing themselves and their horses to arrive on competition day ready to go.”

Several riders, including Rebecca Brown and Liz Halliday-Sharp, raised concerns over the involvement of a potential technical advisor. Rebecca noted that Erik had been very instrumental for riders on the Pre-Elite training lists and in the development pipeline in terms of providing guidance as they navigated their way up the ranks. Liz asked about the potential of private coaches accompanying riders to championships — whether this would be an option in terms of credentials and/or funding. Moroney acknowledged that riders can generally train with whoever they want, and noted that the role of the new leadership team would take into account the relationships with developing riders.

Lastly, the discussion centered on trust, or the lack of it between constituents and governing body. “There is a need for people to know more,” Moroney said. “For the process to be clear. People like to use the word transparency. I like to use the words clarity and communication. The federation has a responsibility to communicate out information to people and to be clear about it and provide people an understanding of what processes are.”

He then went on to note that stakeholders also held their own responsibility to read emails that come and to stay on top of communications. “On the other end, the receiver has to be held accountable for reading it and getting it and for asking questions.”

Moroney closed by again referencing the task force, mentioning an “outside sport facilitator” that could be brought in to help identify challenges and come to a conclusion on the best plan of action.

Tensions ran high during the afternoon’s Calendar Planning and Organizers Open Forum, moderated by Jonathan Elliott, as organizers from around the country sounded off on the newly-revamped USEF calendaring process. The process required events to bid on dates after the calendar was divided up by numbered weeks.

The bid process, which has received feedback from organizers as lacking in transparency, resulted in a major change to the competition calendar beginning in 2023 (with some additional changes on the docket for 2022), and a reduction of 5* preparation events leading up to Kentucky. The calendar changes are likely to have a trickle-down effect on the lower levels, also.

Primarily, contention was raised around lack of choices. The original intent of the updated calendar process was to establish an “ideal calendar” for the proper development of horses and riders, but it becomes clear in forums such as this that the changes have left much to be desired on the part of organizers, many of whom feel they’ve been left out of the process or otherwise unfairly treated.

“We need to treat our organizers and venues well,” one attendee stated. “Because without them we don’t have anything.”

Today’s sessions continue with forums such as the Safety Committee, Strides for Equality Equestrians, the Annual Meeting of Members and Luncheon, Rule Change Committee, and more. You can follow along on the USEA live stream here. I’ll be back with some notes from sessions I’m sitting in on tomorrow as I have a late afternoon flight to catch.