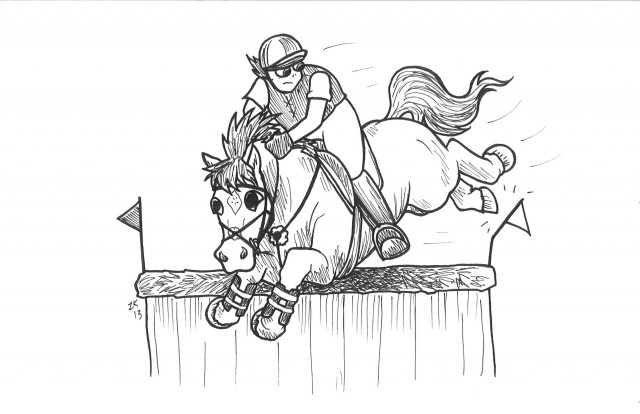 One of the best things I’ve discovered about this sport is the diversity in the community for both humans and their trusty steeds; eventing mounts can come from any number of breeds and backgrounds, so long as they possess the fitness, mental and physical soundness, and versatility to conquer all three disciplines of the sport.

We all dream of owning the perfect horse: a sound and bold soul with impeccable conformation, boundless athleticism, and the type of personality you’d want to take home to meet Mom and Dad. For eventers, there are the added criteria of possessing the scope and enthusiasm to tackle cross country, and the tractability to prevent any unwanted “airs above the ground” during a dressage test. Riders speak of horses’ knees and bascules like they’re the Holy Grails of jumping form. That said, there are also quite a few colorful characters in the eventing world, and I’m not just referring to competitors’ helmet covers and saddle pads! There is a ring of truth to the whole “insanity in the middle” bit, and I would like to pay tribute to some of the horses with more, uh, unorthodox jumping styles that you can see on course. 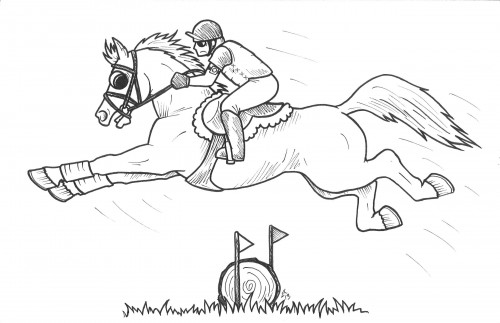 A typical sale ad for a horse like Blast Off might include the buzzwords, “Great scope, has been competed at Beginner Novice and has schooled up to 4’3”, lots of get up and go, experienced riders only.” Where Blast Off excels in vertical impulsion, he lacks bodily control. This causes him to fling his legs around in every direction like Grover from Sesame Street whenever he departs from terra firma. A Starter-level log jump is cleared like Blast Off was launched from a catapult. He might try to jump the entire water complex at once, using his legs as propellers. Blast Off might benefit from gymnastic exercises or meditation. 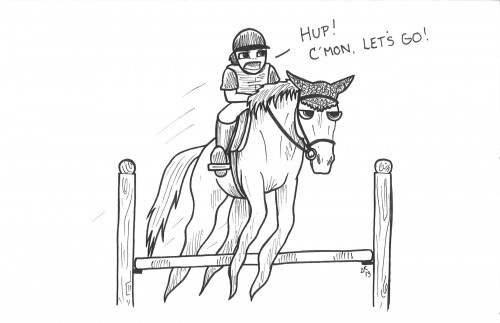 While Dangles McGee has the type of unflappable personality that any parent would want their child to ride, he isn’t exactly the most careful jumper. This is because even if he knocks a rail or trips over his own floppy legs, Dangles just keeps on chugging along because a little thing like a near-death experience isn’t worth getting worked up over, right? His legs aren’t springs, they’re more like tentacles that gently waft in the breeze as he galumphs his steady way through the course. Any effort to convince him to actually pick up his legs just results in a little extra heave in his jump so his legs have more room to hang above the rails. Equestrians should never advocate inhumane practices such as poling or excessive whip use, but perhaps some espresso or spring-loaded horseshoes could help Dangles McGee find his jumping oomph. 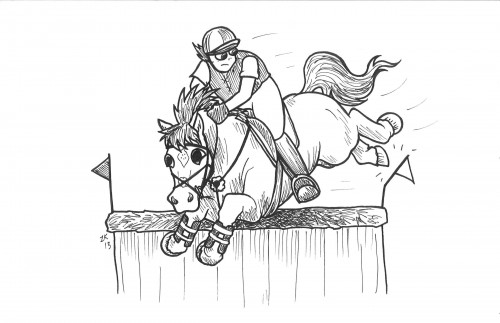 Twister has a good heart and never refuses a jump, however she takes the wrong hint from Blast Off’s acrobatic performance and can take down flags, rails, or innocent bystanders with her midair pirouettes over jumps. Barring any health issues, Twister’s signature “flair” could be caused by poor impulsion or overzealous riding, compensating for high jumps and poor balance by trying to “twist” her legs out of the way. Perhaps she just wants to show off her dancing skills.

While George Morris might not be singing these horses’ praises anytime this century, Blast Off, Dangles McGee, and Twister are charming superstars in their own right, and join the diverse and sometimes-ridiculous ranks of today’s equine triathletes. Even if you don’t necessarily want to ride ‘em, you still gotta love ‘em.

Know of any more (in)Famous jumping styles? Comment on this piece with your most creative names and case studies!