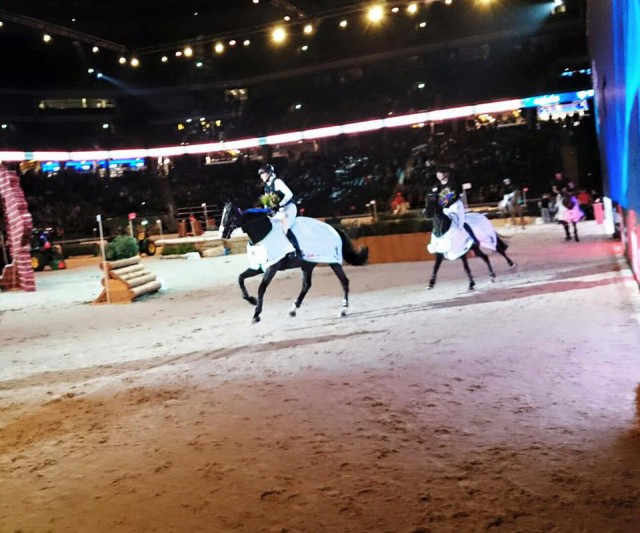 Ingrid Klimke and Parmenides lead the victory gallop in Stockholm. Photo via Ingrid on Facebook.

Indoor eventing season is in full swing, and it definitely seems to be a staple on many European riders’ calendars. Ingrid Klimke, fresh off of a competition at Stuttgart last week, took home the win in the Indoor Eventing at the Sweden International Horse Show on Thursday evening aboard Parmenides.

Parmenides is an 11-year-old Trakehner gelding who has a good amount of experience at the two-star level. Ingrid’s had the ride on this horse for the entirety of his FEI career, and she clinched the Indoor title this week with a score of 72.48, scored on time and jump faults.

In second were New Zealand’s Daniel Jocelyn aboard Beaucatcher, who scored a 72.65, followed by Andreas Ostholt and Pennsylvania (72.81) and Linda Algotsson and Fairnando (75.41). There was also a team competition in which Germany took home the title (surprise!), followed by the combined team of Australia and New Zealand in second, Sweden in third and the Brits in fourth.

We’re finding some videos of rounds from the Indoor competition, including Paul Tapner and Kilronan’s round:

Watch Kilronan at The Sweden International Horse Show Stockholm Indoor XC challenge where he and Paul were part of the “Down Under” team who finished 2nd behind the Germans!

As well as this assortment of rides, including an interesting routine that seems to be a sort of rally race…

Congratulations to Ingrid and Parmenides on their win! Go Indoor Eventing.