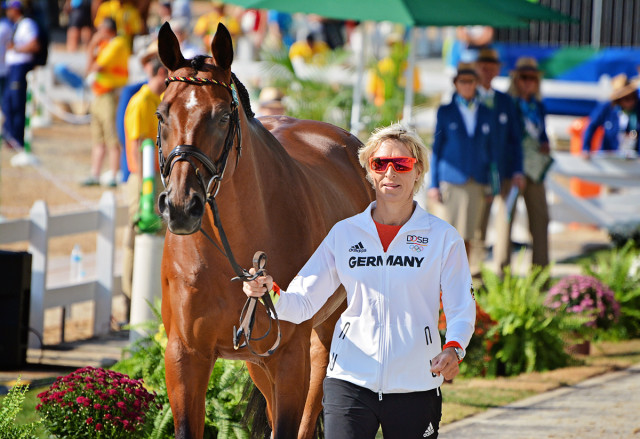 Life goals: Be like Ingrid. Photo by Jenni Autry.

Why be an Olympian, when you could be a dual Olympian? We’re already familiar with double European eventing champion and five-time Olympian Ingrid Klimke — but some casual followers may not know that Germany’s reigning queen has reached the upper echelons of success in the dressage arena, too. Now, word comes that Ingrid has achieved Olympic qualification for the German dressage team, making her eligible to become the first equestrian to compete in two disciplines at the same Games since Mark Todd in 1992.

Ingrid competed Franziskus, an 11 year old Hanoverian stallion owned by Wilhem Holkenbrink, in Frankfurt over the weekend where she earned a new personal best score of 76.128% in the Grand Prix Special for second place in the division.

Of course, only time will tell if Ingrid will travel to Tokyo this summer with two horses, one, or none, but take a moment to just marvel at the dedication, talent, and drive (not to mention disdain for everyday luxuries such as sleep or vacation) that it takes to achieve Olympic qualification for two sports. Ingrid is also joined by China’s Liang Ruiji (qualified for eventing and show jumping) and fellow countryman Michael Jung (qualified for eventing and show jumping) as potential dual athletes.

As #Tokyo2020 hurtles closer and closer, the fervor surrounding the team announcements will surely heat up with the potential double threats poised to make history. Stay tuned for more as these storylines develop!

If you haven’t watched a full ride from Ingrid and Franziskus, then this freestyle performance from this summer at Weisbaden (where she also took third in the ERM leg aboard SAP Hale Bob OLD, no big deal) should make you a lifelong fan: